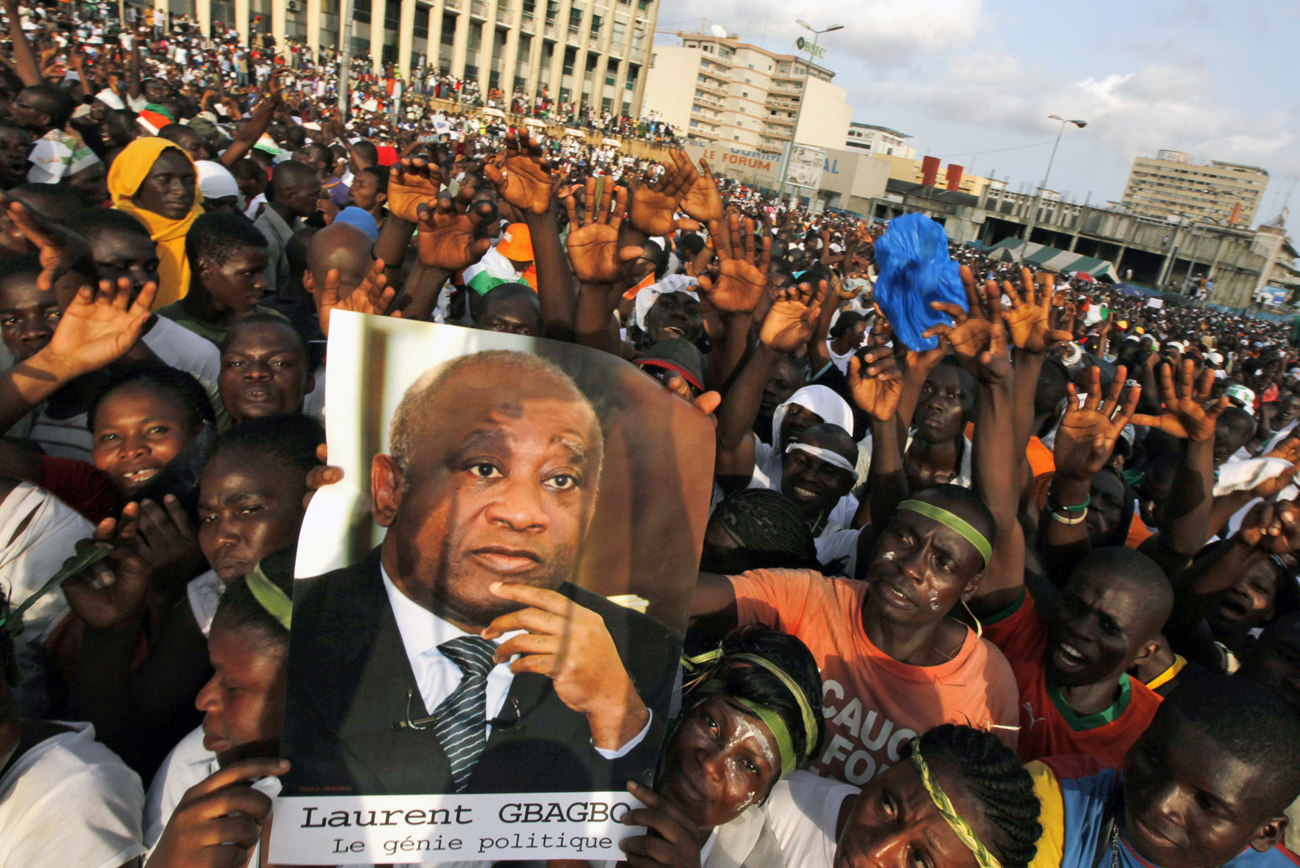 Could it be sheer pig-headed hubris that keeps Laurent Gbagbo clutching on to power in Côte d'Ivoire as a baboon mother might clutch her dead infant for days? Surely, following US President Barack Obama’s unequivocal warning on Friday and the virtually unanimous condemnation of his rule by the rest of the world, Gbagbo knows a civil war would be unwinnable. As Alice might say: “Curiouser and curiouser”. By SIPHO HLONGWANE.

On 14 March, we wrote of Laurent Gbagbo’s increasing isolation, as he swiftly haemorrhaged friends and allies in his quest to stay in power, even after losing the internationally ratified Côte d’Ivoire presidential elections of November 2010 and then losing the support of all but few in Africa and everyone worldwide. After the African Union did an about-turn from its stance of neutrality and ratified Alassane Ouattara as the winner of the elections, we said Gbagbo now faced a simple choice – step down or cast Côte d’Ivoire headlong into civil war. After all, the AU, the last international body that had an interest in the West African country and didn’t expressly ratify Alassane Ouattara as president had now done so.

Gbagbo chose to do the opposite. Perhaps emboldened by the world’s rapt attention on Libya and the other trouble spots in the Middle East, and hoping that disasters like the Japanese earthquakes and tsunamis, as well as financial woes of the PIIGS states in Europe would mean the world’s plate would be too full for anyone to do anything about his increasingly dangerous actions against his own people in a bid to stay in power.

Writing in the Passport blog of Foreign Policy Magazine, Elizabeth Dickinson said, “Believe me, I know: You have no bandwidth for the Ivory Coast today. But that may be exactly why the situation in this West African country – far from the geopolitics of Libya and the human tragedy of Japan – is going south so quickly. It looks increasingly like outgoing president Laurent Gbagbo has made a calculation the world just doesn’t have enough free hands to stop him if he pushes the country back into war.”

President Barack Obama has now declared that if Gbagbo does not step down from power, he would face diplomatic and economic sanctions that would isolate the entire country from the rest of the world.

Watch: President Obama Speaks to the People of Côte d’Ivoire.

While not declaring war against Gbagbo in as many words, Obama threw down an ultimatum to the former president, saying “last year’s elections were free and fair. Alassane Ouattara is the democratically elected president of the nation”. Obama commended Ouattara for choosing the route of an inclusive government, which would have seen many of Gbagbo’s top ministers keeping their positions in a unity government. “It’s time for democracy in Côte d’Ivoire, and those who choose that path will have a friend and partner in the United States of America,” Obama said in conclusion.

Earlier this year, the USA unilaterally slapped Gbagbo with sanctions, and spearheaded the ban on cocoa exports from Côte d’Ivoire in an effort to cut off Gbagbo’s finances. It remains to be seen just how disturbing Obama’s message was to Gbagbo and his forces.

The Economic Community of West African States has been strongly opposed to Gbagbo’s power grab from the start, unlike South Africa’s halting and muddled approach to the crisis. Led by Nigeria, they have at various stages lobbied for military intervention in Côte d’Ivoire, and when the world balked at that (astonishing, when compared to the charge into Libya), Ecowas provided for UN peacekeepers to enter the troubled West African country.

After Ecowas ratified the elections and declared Ouattara the president, the AU sent a five-president panel to the country to mediate between Gbagbo and Ouattara, when the former refused to cede power. The panel eventually accepted Ouattara’s proposal for Côte d’Ivoire. Unsurprisingly, Gbagbo rejected the proposal that would see him lose power, even if it meant that his political party would still be in government.

In response to this, the AU sent the former Cape Verde foreign minister Jose Brito to mediate an end to the escalating crisis. Brito is tasked with convincing Gbabgo to accept the AU’s decision. Ouattara has rejected Brito as a mediator, both for his close personal ties to Gbagbo and the fact that the AU promised to send a former head of state. Photo: A man known as Commander Bauer, the chief of a group of fighters which calls itself the “invisible commandos”, walks with his men in northern Abidjan’s Abobo district March 26, 2011. Fighting in Ivory Coast’s main city is spreading and the death toll from a power struggle between incumbent leader Laurent Gbagbo and his rival Alassane Ouattara is mounting. REUTERS/Luc Gnago.

Ouattara expressed surprise at Brito’s selection, according to a statement, “given his personal relationship and his political connection, known to everyone in Côte d’Ivoire, with the incumbent president Laurent Gbagbo.

“Moreover, this decision does not conform to the expressed will to appoint a former head of state in this function,” Ouattara said in a statement.

“Consequently, the Presidency of the Republic of Côte d’Ivoire rejects Jose Brito as the AU high representative.”

This confusing decision by the AU signals a lack of intent to bring a swift and decisive resolution to the Côte d’Ivoire crisis. As the country hurtles steadily toward civil war (it already is in such a state, by some definitions), the last thing the AU should be doing is swinging back and forth in support of Gbagbo and Ouattara.

Côte d’Ivoire’s volatile situation threatens the entire region (Ecowas saw this coming from 100km away, you could say). As many as 1 million people have been driven from their homes across the country in a bid to escape the violence. There are now 462 reported killings and hundreds more arrests. Many of these people will inevitably flee to neighbouring countries, creating pressure on the entire region. According to AFP, armed gangs from Liberia are entering Côte d’Ivoire from the west on a looting, raping and murdering rampage in the knowledge the Ivorian government can’t stop them.

Should Gbagbo’s finances run out, he’ll probably just encourage his supporters to turn on Ouattara’s supporters. The likes of Charles Blé Goudé will be more than happy to oblige.

Out-and-out war from Nigeria, France or the US against Gbagbo is an extremely dim prospect and there is a lot the world can still do before they reach that option. But we can’t help sensing Gbagbo may be waiting for the F14 fighter jets to start flying the Ivorian skies before he realises he has pushed his luck too far. DM

Main photo: Supporters of Ivory Coast’s Laurent Gbagbo hold a picture of him as they attend a rally in Plateau, near the presidential palace in Abidjan March 26, 2011. Thousands of youth supporters of Gbagbo gathered around his presidential palace on Saturday in a show of support, as days of fierce fighting between his security forces and insurgents continued. REUTERS/Thierry Gouegnon.