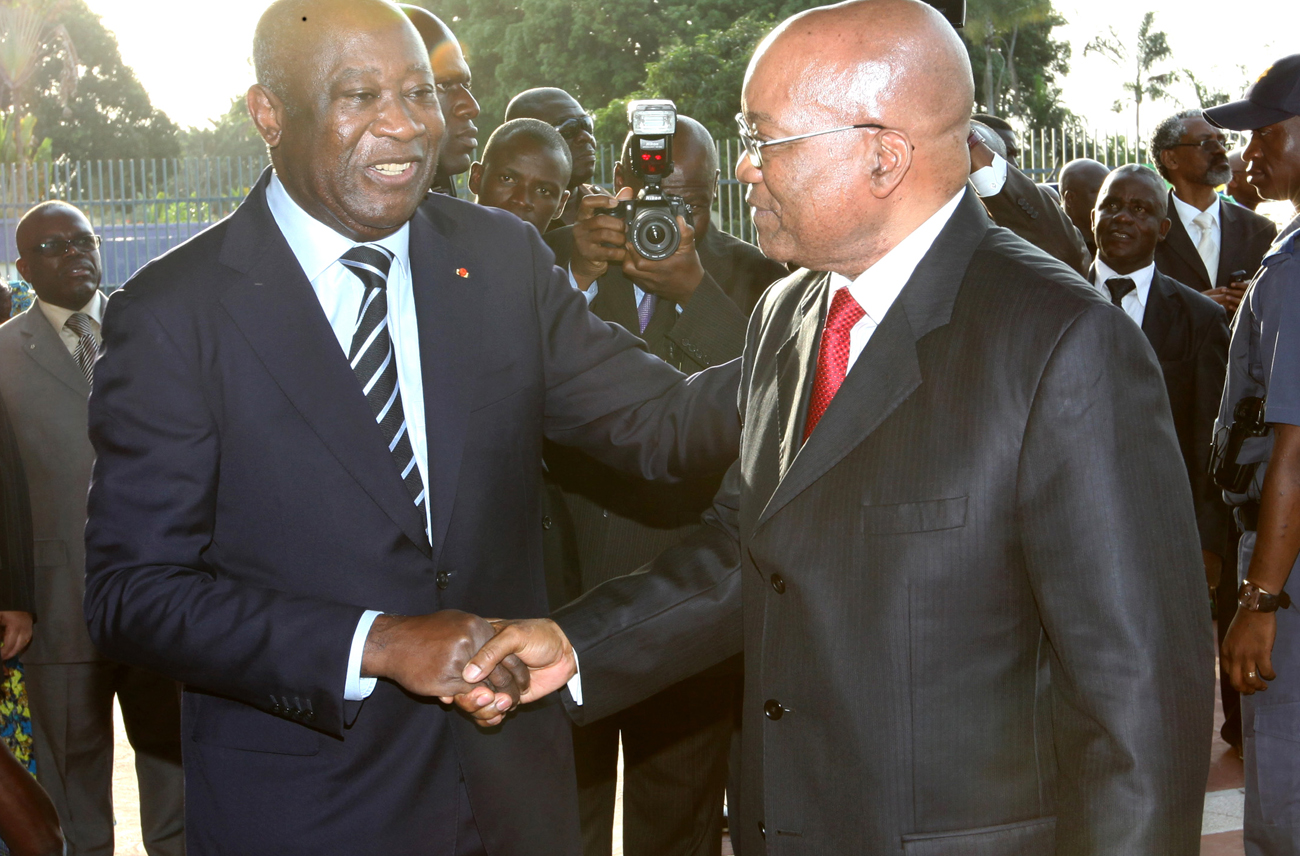 The African Union’s Peace and Security Council has finally caught up with the rest of the thinking world and accepted Alassane Ouattara’s proposal for resolving Côte d'Ivoire’s presidential crisis. The question now is, as power slips from his grasp, how far will Laurent Gbagbo throw his toys? By SIPHO HLONGWANE.

Laurent Gbagbo has nothing to fear from Alassane Ouattara and should hand over power immediately, according to Ouattara’s South African representative, Patrice Mallet. “If he relinquishes power peacefully, I don’t think President Ouattara will retaliate against him,” Mallet said. “What the Ivorian people want is a peaceful transition. What we’re asking Gbagbo to do is relinquish power immediately.

Gbagbo has been fighting on two fronts in a bid to cling to power. On the one side he faces the UN (which ratified the elections), the European Union, the US and now the African Union. Within Côte d’Ivoire, he faces large pockets of resistance in the economic capital of Abidjan, and the country at large. The former president is losing badly on both fronts.

For a long time, the major parts of the AU seemed be leaning in Gbagbo’s direction, by not siding with the international organisations which had declared Ouattara the winner. After sending a mediation panel to the country, the AU accepted Ouattara’s proposal, which will see him preside over a unity government, as long as Gbagbo cedes power quietly. Even South Africa has changed its position on Côte d’Ivoire backing the AU’s proposal.

But Gbagbo has, so far, defied the AU by refusing to accept the proposal.

Gbagbo’s snub of the AU is igniting the pro-Ouattara forces within the country against him. The suburb of Abobo in Abidjan is the site of the largest pro-Ouattara camp, and the heaviest fighting within the city after militias retaliated to attacks from the Gbagbo-aligned elements of the military. According to AFP, Gbagbo’s forces went on the rampage once again in Abobo and neighbouring suburb Cocody, shelling the Ouattara strongholds heavily.

The world is also tightening its grasp on Gbagbo’s purse. In an effort to source funds after he was sanctioned, Gbagbo nationalised the country’s cocoa market. The UN is now considering setting up an escrow account for Côte d’Ivoire cocoa traders to keep money out of Gbagbo’s hands.

Mallet said Ouattara was on his way to Abuja to meet with Nigeria’s President Goodluck Jonathan to thank him for his support. Nigeria is the largest and most powerful state within the Economic Community of West African States group, which supported Ouattara from the day he won the election 28 November.

In a last-ditch attempt to keep France and the UN soldiers out of the country (though some say it was a transparent attempt to keep Ouattara from flying back in after attending the AU meeting in Ethiopia), Gbagbo declared a no-fly zone for French and UN aircraft over Côte d’Ivoire. The UN gamely ignored the order.

Ouattara would have no problem returning to Côte d’Ivoire, according to Mallet. He called the no-fly zone  “null and void”. “Ouattara will come back when he’s ready to return to Côte d’Ivoire.

“If you remember, Gbagbo issued a decree saying that the ambassadors from the US, Canada and the UK should leave the country, those [decrees] didn’t have any effect at all, so [the no-fly zone] is in the same line of thought. At this point, his decrees don’t have any weight at all,” Mallet said.

With his power and support base rapidly dwindling, Gbagbo is going to have to think hard before deciding to fight it out to the end. Keeping the militias loyal to him (and those fighters lent to him by one of his last remaining friends, José Eduardo dos Santos of Angola) happy and paid will at some stage become a problem. His only card remaining is to launch a full attack on Abobo and Cocody and hope that the battle with provoke the pro-Ouattara north of the country to retaliate violently, and tip the entire country back into a full-blown civil war.

The renewed fighting in Abidjan suggests that someone, if not Gbagbo himself, within the Gbagbo camp thinks that setting the entire country on fire is the way to go. But with AU support now behind Ouattara, Gbagbo’s only rational choice may be to to step down, as the longer he delays, the more lives will be lost and the longer the peace process will take to kick in. Then again, he can continue fighting until the end. DM