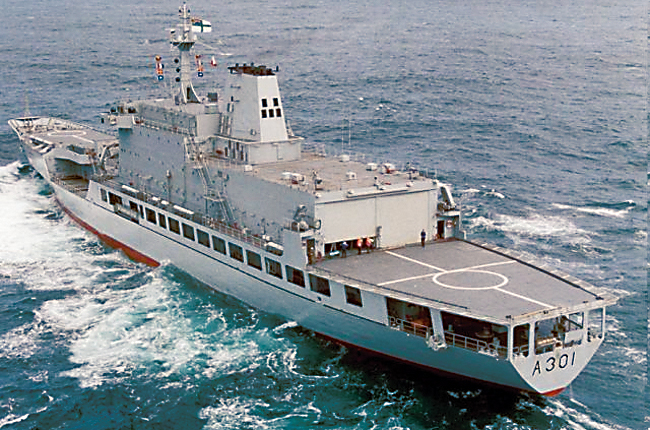 On Thursday, the nation battened down the hatches in preparation for the State of the Nation address. Thousands of miles to the north, off the coast of Côte d'Ivoire, a different sort of tension is brewing, thanks to the lurking SAS Drakensberg. You know, the same one SA couldn't spare to help chase Somali pirates. By SIPHO HLONGWANE.

South Africa has been included in a high-level African Union mediation panel to be sent to Côte d’Ivoire to resolve the political crisis that erupted after last year’s elections. Other mediating countries include Chad, Mauritania, Tanzania and Burkina Faso. The Côte d’Ivoire president Laurent Gbagbo refused to step down after losing the elections to Alasanne Ouattara. In an effort to resolve the crisis, the Economic Community of West African States threw its weight behind Ouattara, with some states saying that if Gbagbo wouldn’t go quietly, they’d dislodge him forcefully. The crisis was further complicated when the AU didn’t ratify the position of Ecowas, choosing instead to send its own mediation panel. Now, just to make sure that everything was truly tangled, one of the mediator countries (the most powerful and wealthiest one on the continent) decided to send a warship into the regional waters.

We strongly stated a while back that the Côte d’Ivoire impasse was playing out as a pissing contest between Ecowas and SADC (or Nigeria and South Africa, if you want to be specific), and our suspicions are only deepened by this latest development. The president of Ecowas James Victor Gbeho said, “As we talk now there is a South African warship docked in Cote d’Ivoire. Actions such as that can only complicate the matter further.”

According to defence force spokesman Siphiwe Dlamini, the vessel isn’t a warship, but a supply vessel. And no, it didn’t enter Côte d’Ivoire waters. And no, it’s only taking part in a routine joint training operation. And no, we can’t know who are the other countries taking part in the operation. But “it is there in case it is needed,” Dlamini said.

The SAS Drakensberg may be classified as a “supply vessel” by the South African Navy, but it is not a wallowing barge either. The Drakensberg is the largest and most sophisticated naval vessel to be built in South Africa and sports a not-inconsiderable arsenal of four 20mm guns and six 12.7mm guns. It can also carry two Oryx helicopters, equipped with two door-mounted machine guns. If South Africa wanted to make mischief with this “supply vessel”, it would take more than a walking stick waved aloft to stop it. (It could also work as an ideal VIP evacuation ship. – Ed)

Ecowas itself is under no illusions as to what this all means. South Africa has failed to side with Ecowas and the United Nations in ratifying Ouattara as the democratically elected president of Côte d’Ivoire. President Zuma is now supposed to help solve the crisis, after the AU took the matter out of the West African bloc’s hands, and he happens to have a very powerful warship within reach. If that isn’t the biggest “up yours” to Ecowas, we’d like to know what is. “The concern that some of us have is that apparently because of certain geopolitical interests, some countries are keen on awarding a failure mark to Ecowas at this stage so that they themselves would shine,” Gbeho grumbled.

The mediator countries are sending in teams to help set up for the arrival of the various presidents, who must mediate and reach a legally binding settlement within a month (from the end of January’s African Union summit). It remains to be seen exactly what direction the panel moves, but don’t be too surprised if we see Gbagbo retaining power and Ouattara having to take a lesser governmental role, if any. DM