New BMW X5: Rumble without the tumble - even in the jun...

New BMW X5: Rumble without the tumble – even in the jungle 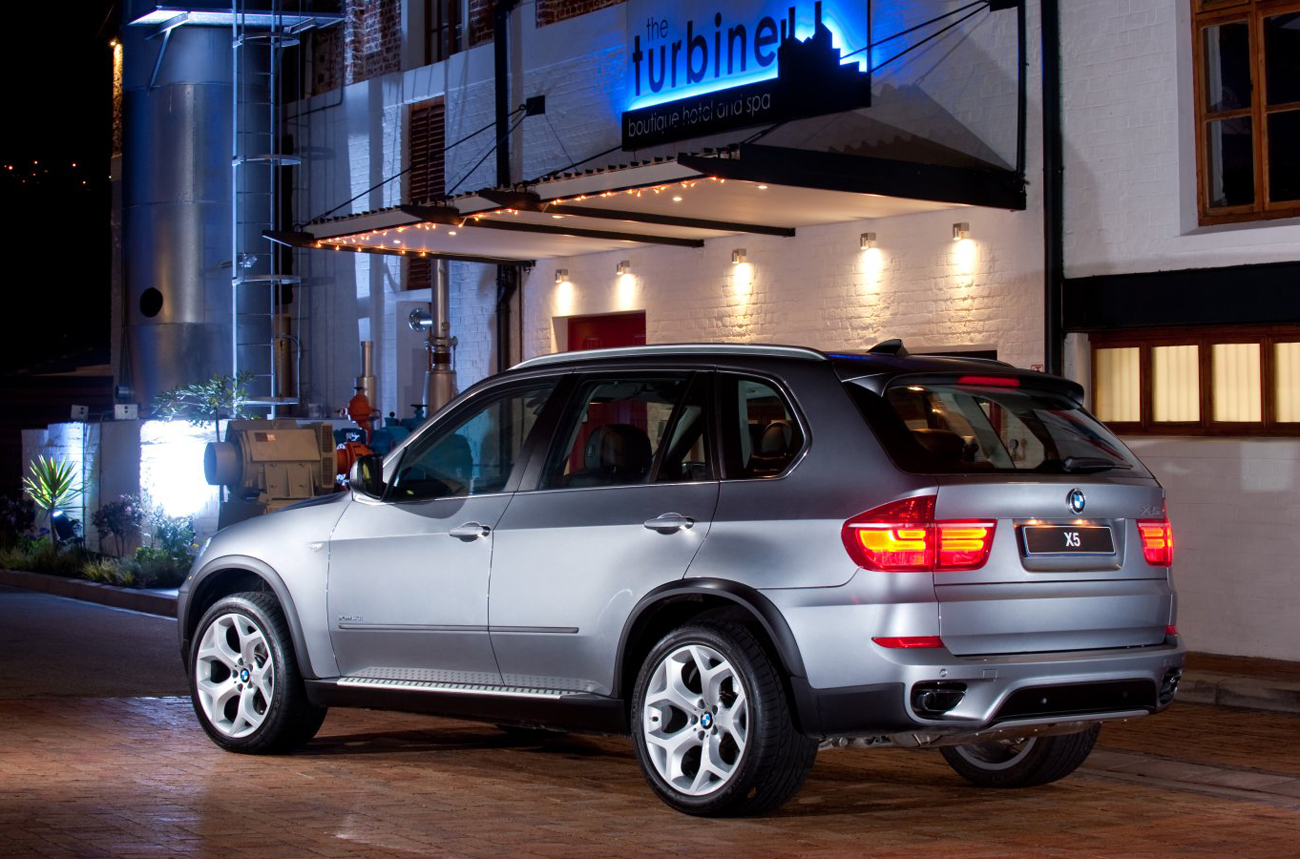 Everybody knows the natural habitat of the BMW X5 is the parking lot of any fancy mall or trendy nightspot. Everybody also knows that, for all its 4x4 pretensions, the X5 is a city slicker and doesn’t like to get its boots sullied by dust, dirt or muddy rivers. Well, think again: The X5 is much more versatile than you think. And it’s just been updated with some new “green” engines, too. By DEON SCHOEMAN.

The most extreme off-road manoeuvre you’d expect a BMW X5 to execute would be mounting a kerb – or, at worst, negotiating a gravel road on the way to some exclusive game lodge. BMW’s big all-terrainer has never been considered a 4×4 in the conventional, bundu-bashing sense of the word, despite its X-drive all-wheel drive system.

Indeed, even BMW has sought to distinguish X5 from conventional 4x4s by dubbing it a sports activity vehicle, and placing much of its marketing emphasis on the vehicle’s athletic prowess and its luxurious, roomy interior.

No wonder then that X5 owners are unlikely to ever venture off the beaten track and prefer to enjoy their steeds on paved roads. For them, the big vehicle’s raised seating position, and the commanding view that allows, plus all the niceties of a luxury limo, as well as seating for up to seven, have been the main attractions. But, as we’ve just been reminded, there’s a lot more to the X5 than school runs and shopping mall parking lots. The X5 can tackle terrain that would make the average owner cringe.

The occasion to put the Beemer’s hidden talents to the test came at this week’s launch of a new, revised X5 – although you’d be hard-pressed to tell the difference between this latest version and its predecessor.

The shape and silhouette remain unchanged, and only the cognoscenti will spot the slightly different front, with its lower, more aggressive front bumper with integrated airdam and the repositioned fog lamps. The rear apron is also deeper and more muscular, offering a home to twin exhaust tailpipes on all models. If anything, the additional colour-coding applied to the rest of the exterior makes the X5 look more road car than off-road machine, while the range of alloy wheels has been redesigned and includes several 20-inch versions – not exactly what one would prescribe for tackling off-road terrain.

However, as it turns out, all the most important changes are under the skin. For starters, the drivetrains have been thoroughly revised and now feature engines that deliver more power, but sip fuel more frugally. There’s also smoother, more efficient auto gearbox with eight ratios.

And then there’s the X5’s all-wheel drive system, which has also come under the spotlight. While it remains without the services of a low-range transfer case, it’s been improved to react  more quickly to wheel slip and distributes torque between the front and rear axles more efficiently than before.

The interior is very much what you’d expect of a luxury SUV – spacious and comfortable, with lashings of genuine hide and all the mod cons. The seven-seat configuration is an option, but frankly, the fold-up third row is for gnomes, midgets or small children only and not worth the extra money.

The equipment list is full-house for the most, and offers all the usual amenities – air-con, keyless remote central locking, decent sound, electric everything, and the like. But you’ll pay heavily for options like the hard drive-based SatNav system, which also allows favourite tunes to be stored and played back. A USB interface accommodates iPods, but is less than intuitive to operate.

There’s also an impressive range of driver assistance systems to choose from. These include active cruise control with stop-and-go function and lane departure warning. A heads-up display, adaptive cornering headlights, automatic high-beam activation, park distance control and a reversing camera with a selectable top view are available as options. All four engines are turbocharged and feature BMW’s Efficient Dynamics technologies, which focus on reducing fuel consumption and emissions, while increasing power output – an admirable magic curtain trick that makes for a “greener” X5 that feels sportier than ever.

And when we say more power, we mean it: The xDrive50i flagship has 300kW of max power and a crunching 600Nm on tap, while the xDrive40d wrings out an impressive 225kW and 600Nm from its three-litre turbodiesel.

The result is an X5 that feels almost obscenely athletic – like a muscle-bound body builder who’s able to take on Hussein Bolt on the 100m sprint. Throttle reaction is instant, and were it not for the traction of the all-wheel drive system, black-striping off the mark would be a given. The factory performance figures prove that the Sports Activity Vehicle moniker is no empty promise. The xDrive50i will rush from rest to 100km /h in an astonishing 5.5 seconds, with a top speed of 250km/h. The xDrive40d’s stats are 6.6 sec and 236km/h. And that from vehicles weighing more than two tons …

Our drive along the Garden Route this week included some fast and furious mountain passes, where  the X5 impressed with its composure and resistance to body lean. You can carry tremendous speeds into corners, then rely on the stability control and the all-wheel drive to sort things out if enthusiasm exceeds capability.

On tar, the big rubber boots on those (optional) 20-inch wheels make a lot of sense, providing a fat footprint of the sticky, expensive black stuff to ensure extra traction. But we were concerned how they would cope with off-road terrain.

And BMW made sure that, this time, the X5 would be taken out of its comfort zone and into the bush. Under the kind auspices of SanParks, a narrow, winding trail through the indigenous Outeniqua Forest became an excellent, if carefully controlled, proving ground for the big Beemer’s xDrive system. Admittedly, there weren’t any boulders, dongas or river crossings. But the mix of loose and rocky surfaces, mud patches and steep descents, while winding our way through the emerald forests, provided ample opportunity to test the X5’s composure off the beaten track.

Except for a ride that bordered on jarring, courtesy of those ultralow-profile, run-flat tyres (and their unyielding sidewalls) the X5 coped with the conditions with regal ease. The xDrive system reacted instantly when required, providing extra traction in milliseconds and always ensuring steady forward progress.

When we emerged near Harkerville after three hours of forest driving, our perceptions of the X5 had changed forever. Yes, it’s everything conventional perceptions dictate – large, imposing, luxurious, comfortable and safe.

It’s also indecently rapid when pressing on, rivalling many a sports car when tackling the twisties – although, admittedly, BMW’s positioning of the X5 as a Sports Activity Vehicle means that its dynamic talents don’t come as that much of a surprise.

But the way the X5 traversed the rugged conditions in the Outeniqua raised many an eyebrow. Whether your average X5 owner will be prepared to tackle such terrain, having spent upwards of R650 000 for his steed is, of course, an entirely different matter. However, it proves the X5 isn’t just a shopping mall cruiser, but a truly versatile machine that can wear many different hats with equal aplomb.

BMW is particularly proud of the new X5’s fuel efficiency, achieved despite the augmented performance. Certainly, the xDrive40d seemed to sip rather than guzzle its quote of 50ppm diesel, achieving fuel consumption figures well below the 10 l/100km mark.

The V8 has more outright poke and similar shove, but the top-end turbodiesel has to be the pick of this bunch, offering the best of all worlds under all conditions. Even refinement, which used to be the Achilles heel of diesels, is now comparable with petrol motors.

This latest BMW X5 might not look that different from its predecessors, but under that sheet metal, there’s a very adept, very versatile vehicle. That will go some way to warrant the luxury limo pricing, which starts at R657 000 for the xDrive30d, and extends to an eye-watering R807 000 for the xDrive50i.

So, the next time you spot a BMW X5 splattered with dirt and grime, it may not be a spray-on job, after all… DM

Deon Schoeman can be contacted at: [email protected]