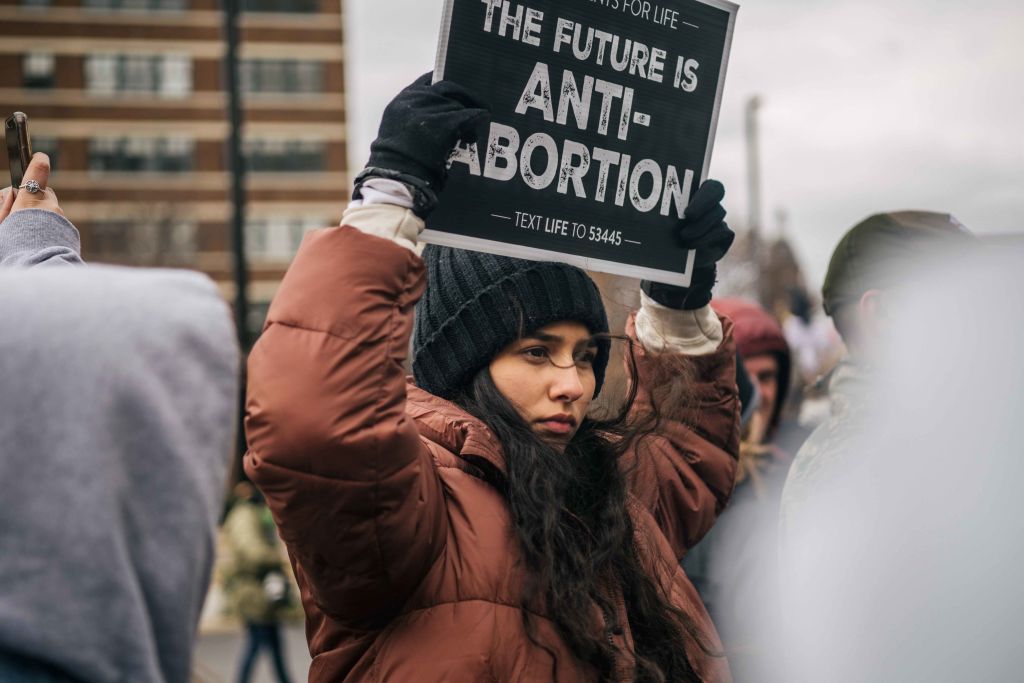 Pro-life demonstrators listen to organizers and activists during the "Right To Life" rally on January 15, 2022 in Dallas, Texas. The Catholic Pro-Life Community, Texans for Life Coalition, the Catholic Diocese of Dallas, and the Diocese of Fort Worth North hosted the Texas March for Life rally where people gathered to instigate the overturning of Roe v. Wade, a Supreme Court decision that permitted states throughout the country in legalizing abortion under certain regulations. The 49th anniversary of the decision to legalize abortion falls on January 22. Image: Brandon Bell / Getty Images

Some reasons people oppose abortion seem to be at odds with other positions they hold. Evolutionary social science points to a surprising motivation for anti-abortion attitudes.

Many people have strong opinions about abortion – especially in the wake of the US Supreme Court decision that overturned Roe v. Wade, revoking a constitutional right previously held by more than 165 million Americans.

It’s common to hear religious, political and other ideologically driven explanations – for example, about the sanctity of life. If such beliefs were really driving anti-abortion attitudes, though, then people who oppose abortion might not support the death penalty (many do), and they would support social safety net measures that could save newborns’ lives (many don’t).

Here, we suggest a different explanation for anti-abortion attitudes – one you probably haven’t considered before – from our field of evolutionary social science.

Why do people care what strangers do?

The evolutionary coin of the realm is fitness – getting more copies of your genes into the next generation. What faraway strangers do presumably has limited impact on your own fitness. So from this perspective, it is a mystery why people in Pensacola care so strongly about what goes on in the bedrooms of Philadelphia or the Planned Parenthoods of Los Angeles.

The solution to this puzzle – and one answer to what is driving anti-abortion attitudes – lies in a conflict of sexual strategies: People vary in how opposed they are to casual sex. More “sexually restricted” people tend to shun casual sex and instead invest heavily in long-term relationships and parenting children. In contrast, more “sexually unrestricted” people tend to pursue a series of different sexual partners and are often slower to settle down.

These sexual strategies conflict in ways that affect evolutionary fitness.

The crux of this argument is that, for sexually restricted people, other people’s sexual freedoms represent threats. Consider that sexually restricted women often get married young and have children early in life. These choices are just as valid as a decision to wait, but they can also be detrimental to women’s occupational attainment and tend to leave women more economically dependent on husbands.

Other women’s sexual openness can destroy these women’s lives and livelihoods by breaking up the relationships they depend on. So sexually restricted women benefit from impeding other people’s sexual freedoms. Likewise, sexually restricted men tend to invest a lot in their children, so they benefit from prohibiting people’s sexual freedoms to preclude the high fitness costs of being cuckolded.

According to evolutionary social science, restricted sexual strategists benefit by imposing their strategic preferences on society – by curtailing other people’s sexual freedoms.

How can restricted sexual strategists achieve this? By making casual sex more costly.

For example, banning women’s access to safe and legal abortion essentially forces them to endure the costs of bearing a child. Such hikes in the price of casual sex can deter people from having it.

This attitude is perhaps best illustrated by a statement from Mariano Azuela, a justice who opposed abortion when it came before Mexico’s Supreme Court in 2008: “I feel that a woman in some way has to live with the phenomenon of becoming pregnant. When she does not want to keep the product of the pregnancy, she still has to suffer the effects during the whole period.”

Force people to “suffer the effects” of casual sex, and fewer people will pursue it.

Also note that abortion restrictions do not increase the costs of sex equally. Women bear the costs of gestation, face the life-threatening dangers of childbirth and disproportionately bear responsibility for child care. When women are denied abortions, they are also more likely to end up in poverty and experience intimate partner violence.

No one would argue this is a conscious phenomenon. Rather, people’s strategic interests shape their attitudes in nonconscious but self-benefiting ways – a common finding in political science and evolutionary social science alike.

An evolutionary perspective suggests that common explanations are not the genuine drivers of people’s attitudes – on either side of the abortion debate.

In fact, people’s stated religious, political and ideological explanations are often rife with awkward contradictions. For example, many who oppose abortion also oppose preventing unwanted pregnancy through access to contraception.

From an evolutionary perspective, such contradictions are easily resolved. Sexually restricted people benefit from increasing the costs of sex. That cost increases when people cannot access legal abortions or prevent unwanted pregnancy.

An evolutionary perspective also makes unique – often counterintuitive – predictions about which attitudes travel together. This view predicts that if sexually restricted people associate something with sexual freedoms, they should oppose it.

Indeed, researchers have found that sexually restricted people oppose not only abortion and birth control, but also marriage equality, because they perceive homosexuality as associated with sexual promiscuity, and recreational drugs, presumably because they associate drugs like marijuana and MDMA with casual sex. We suspect this list likely also includes transgender rights, public breastfeeding, premarital sex, what books children read (and if drag queens can read to them), equal pay for women, and many other concerns that have yet to be tested.

No other theories we are aware of predict these strange attitudinal bedfellows.

Behind the link to religion and conservatism

This evolutionary perspective can also explain why anti-abortion attitudes are so often associated with religion and social conservatism.

Rather than thinking that religiosity causes people to be sexually restricted, this perspective suggests that a restricted sexual strategy can motivate people to become religious. Why? Several scholars have suggested that people adhere to religion in part because its teachings promote sexually restricted norms. Supporting this idea, participants in one study reported being more religious after researchers showed them photos of attractive people of their own sex – that is, potential mating rivals.

Sexually restricted people also tend to invest highly in parenting, so they stand to benefit when other people adhere to norms that benefit parents. Like religion, social conservatism prescribes parent-benefiting norms like constricting sexual freedoms and ostensibly promoting family stability. In line with this, some research suggests that people don’t simply become more conservative with age. Rather, people become more socially conservative during parenthood.

Restricting everyone to benefit yourself

There are multiple answers to any “why” question in scientific research. Ideological beliefs, personal histories and other factors certainly play a role in people’s abortion attitudes.

But so, too, do people’s sexual strategies.

This evolutionary social science research suggests that restricted sexual strategists benefit by making everyone else play by their rules. And just as Justice Thomas suggested when overturning Roe v. Wade, this group may be taking aim at birth control and marriage equality next. DM/ML