‘Don’t say we didn’t warn you’ – abortion rights activists vow to fight back, but it’s a battle on many fronts 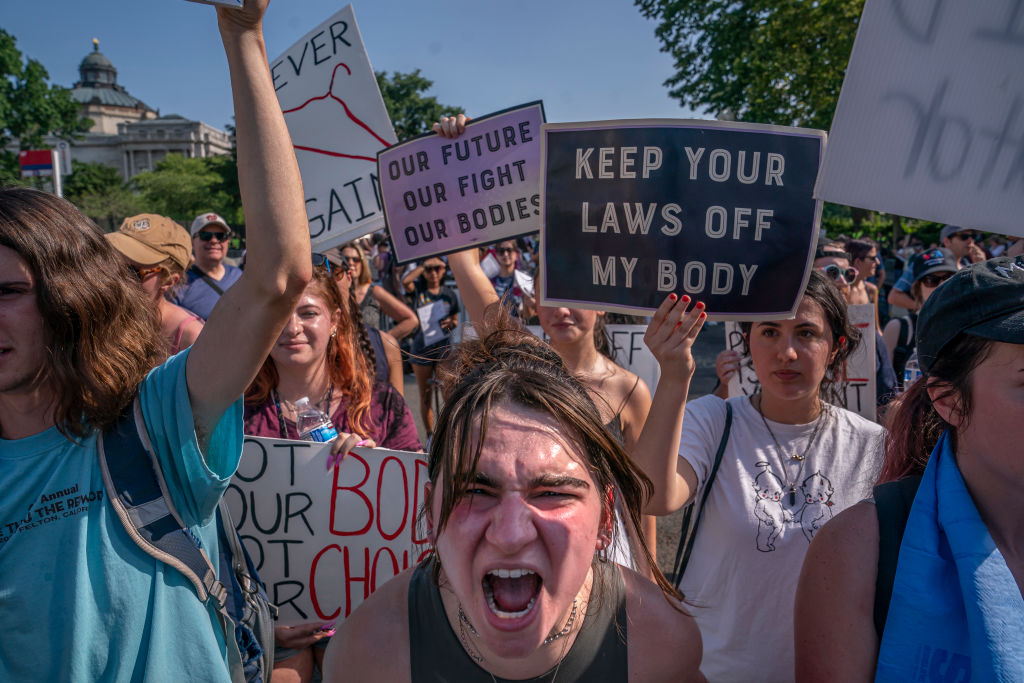 In the wake of Democrats’ failure to mobilise for women, it falls to the latter to lead the ‘fight back like we always have’, Women’s March boss says. ‘And we will win.’

The 1973 Roe v Wade pro-abortion ruling in the US was never adequate. Religious conservatives spent decades trying to undermine and overturn the judgment.

Democrats failed to pass federal legislation on the issue and dropped the ball as Republicans targeted state legislatures, flipping more than a dozen in 2010 and passing hundreds of laws that chipped away at abortion access.

As the Republican base became increasingly fundamentalist, calls to criminalise abortion rather than limit access took hold. Those same Republicans installed a majority in the Supreme Court.

Many Americans are still coming to terms with the court’s decision to overturn Roe and scrap the constitutional right to abortion.

“It’s no surprise that this illegitimate, far-right Supreme Court wants to take away our constitutionally protected rights. Instead of waiting around for a court that abdicated its duties to protect the constitution long ago, Democrats should have mobilised and fought for us,” said Women’s March executive director Rachel O’Leary Carmona as protests erupted in cities across the country following the ruling.

“But they failed. Now, like always, the burden falls to women to lead this fight. And we will be ungovernable, unmanageable and unrelenting until this government starts working for us. We will fight back like we always have. And we will win. Don’t say we didn’t warn you.”

Read in Daily Maverick: “Dark lessons in democracy from both the US Supreme Court and our own under-attack judiciary”

The Supreme Court ruling, written by Justice Samuel Alito and supported by the conservative majority that took control under former president Donald Trump, essentially said the constitution, ratified by men in 1788, didn’t mention abortion. It sent the issue back to the states, 26 of which are expected to prohibit or severely restrict abortion access, many with no exceptions for rape, incest or the life of the mother.

They’re also at state capitols where abortion rights are under threat. They’re on the streets in states where access to abortion is likely to remain, asking leaders to increase access for women from Republican states.

Progressive Democrats and protesters have called on Biden to take steps to defend women’s rights, such as declaring a public health emergency, ensuring that Food and Drug Administration guidelines on abortion medication supersede state bans, and building abortion clinics on federal land.

Biden’s health secretary, Xavier Becerra, this week committed to doing everything possible but suggested there was little he could do.

“Roe is on the ballot,” said Biden after the court’s ruling. November midterm polls will determine majorities in Congress and state votes will decide who leads legislatures that decide whether abortion is legal or not.

Each US state has its own constitution and some states are planning referendums on whether to protect or abandon reproductive rights.

Read in Daily Maverick: “Criminalising abortion: Why your body is still a battleground”

In anticipation of the ruling, advocacy and pro-Democrat reproductive rights groups, the Planned Parenthood Action Fund, NARAL Pro-Choice America and Emily’s List said they would spend $150-million on the midterms to help elect supporters of abortion rights.

Democrats face an uphill battle in the midterms owing to Biden’s unpopularity, his perceived failure to deliver on election promises and economic issues. How voters will respond to the Roe ruling is unknown; for 50 years the Supreme Court backed the precedent and many Americans thought the issue was decided.

If Democrats sweep the November vote, they stand a stronger chance of legislating the national right to abortion. If Republicans take control of the House and Senate, they could ban abortion nationwide.

The National Women’s Organization said: “We’ve been ready for this. We knew that with the new conservative majority on the Supreme Court, abortion rights were hanging by a thread. Today, that thread – that lifeline – has been cut.

Those rights are already being taken away. Abortion clinics in some states closed in the hours and days after the Supreme Court ruling due to “trigger laws”.

Lawyers for abortion rights groups filed a flurry of applications to halt the laws. They won temporary injunctions in Texas, Utah and Louisiana, but victories were limited. After the temporary hold, Texas still limits abortion to the sixth week of pregnancy.

Nancy Northup, CEO of the Center for Reproductive Rights, described the Supreme Court’s decision as a “wrecking ball” to abortion rights.

Soon, Americans might have to decide whether to enforce decisions on the criminalisation of other rights. In his concurring opinion on the judgment, Justice Clarence Thomas suggested the court should consider overturning precedents on contraception and same-sex intimacy and marriage.

Alito’s opinion said the ruling should not be interpreted as a threat to other rights, but, in their dissent, justices Stephen Breyer, Sonia Sotomayor and Elena Kagan made it clear that the court could overturn gay rights.

“Either the mass of the majority’s opinion is hypocrisy or additional constitutional rights are under threat,” they wrote. “Whatever the exact scope of the coming laws, one result of today’s decision is certain: the curtailment of women’s rights, and of their status as free and equal citizens.” DM168