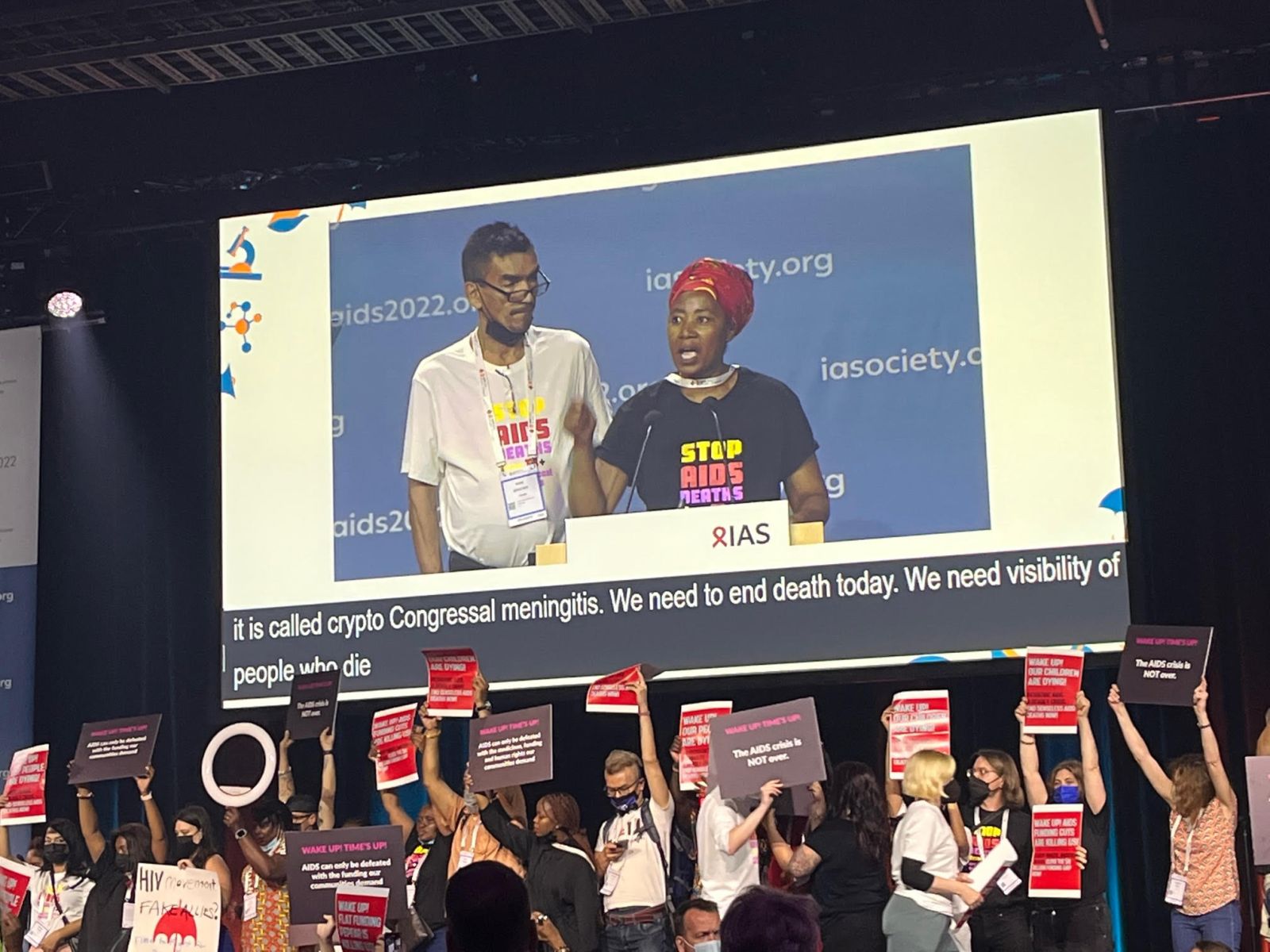 ‘Another minute, another death! AIDS is not over!’ chant protestors as controversy engulfs an international AIDS conference in Canada.

Activists took over the stage at the opening of the AIDS 2022 conference in Montreal, Canada, last week to protest against the refusal of visas to hundreds of delegates, primarily from Africa, and the inequality and lack of funding that is driving new HIV infections.

South African activist Vuyiseka Dubula, former leader of the Treatment Action Campaign, told the conference that activists needed to speak for those who were denied access to the conference.

“TB infections are increasing. Our governments do very little to address the opportunist infection cryptococcal meningitis, young women are used in clinical trials to test [HIV] products but, when these products are ready, they are not accessible,” said Dubula, as the crowd chanted: “Another minute, another death! AIDS is not over!”

Adeeba Kamarulzaman, International AIDS Society (IAS) president and co-chair of AIDS 2022, said that she was “deeply upset” about the visa denials that were a result of “global inequality and systemic racism”.

“IAS is re-evaluating to ensure that future conferences remain inclusive events. Those most affected must be part of the conversation,” said Kamarulzaman.

The Canadian government withdrew its speaker for the opening at the last minute, apparently after hearing about the planned protest.

Expressing disappointment at Canada’s no-show, UNAIDS executive director Winnie Byanyima paid tribute to the protestors, saying no progress had ever been made in HIV without activism.

“Every two minutes an adolescent girl or young woman acquires HIV, too often from a sexual act that was forced on her,” Byanyima told the conference.

“There were 650,000 AIDS-related deaths last year, a life lost every minute despite effective HIV treatment and tools to prevent, detect and treat opportunistic infections,” Byanyima said.

“What we need to do is not a mystery. We know it from what we’ve repeatedly seen succeed across different contexts: shared science, strong services and social solidarity. We can end AIDS by 2030. But the curve will not bend itself. We have to pull it down, together.”

The conference takes place at a difficult time for HIV activism, with a substantial slowdown in progress against the pandemic – in part because of the Covid-19 pandemic.

HIV funding from bilateral donors other than the US has plummeted by 57% over the last decade, according to the UNAIDS Global AIDS update, In Danger.

Addressing the cooling of global donor support for HIV, Professor Linda-Gail Bekker said the disease was still uppermost in the minds of the 28 million people who were on ARV treatment and those at risk of infection.

“We lose sleep over the 10 million people not on treatment. We have not reached our destination yet. It’s time to get back on the bus,” said Bekker, an infectious disease expert and Director of the Desmond Tutu Health Centre in South Africa.

“Time is running out. If we do not re-engage and apply all the science we will backslide and lose all the considerable investment in HIV of the past 40 years,” warned Bekker.

Dr John Nkengasong, newly appointed head of the US President’s Emergency Plan for AIDS Relief (PEPFAR), said 5.5 million babies have been born HIV-free as a result of PEPFAR.

“This is an incredible milestone for our programme and for the next generation,” Nkengasong said, but warned that without replenishment of the “war chest” to fight HIV, it would be hard to keep hope alive.

The replenishment deadline for the Global Fund to Fight AIDS, TB and Malaria is in September and it is estimated that the fund needs $18-billion to save 20 million lives.

More than 9,500 in-person and nearly 2,000 virtual participants are registered to attend AIDS 2022, the 24th International AIDS Conference, which ends on 2 August. DM