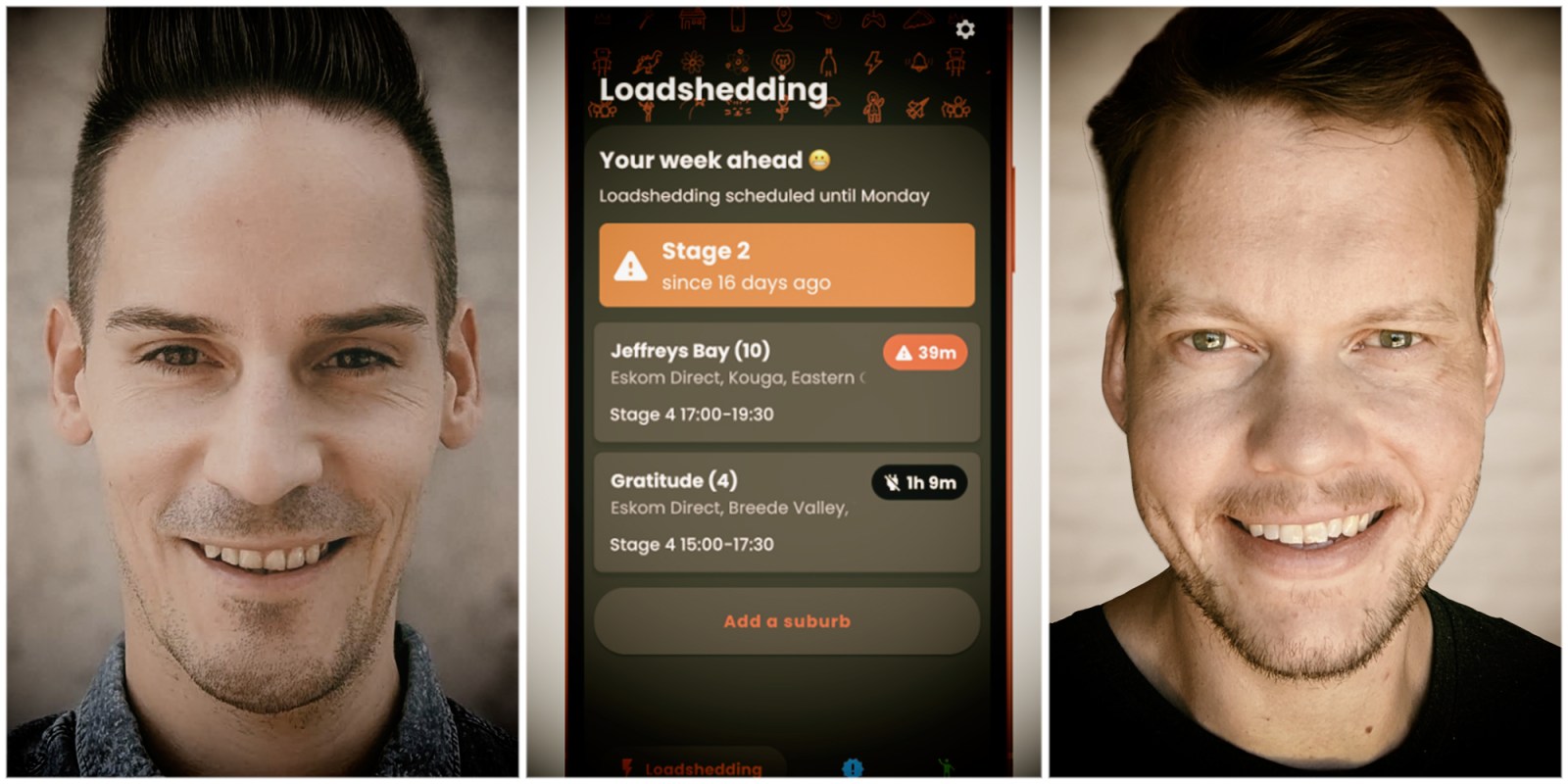 With AskMyStreet, users can find out about hyper-local issues beyond power outages. And perhaps even find love in a hopeless place.

They have been notifying South Africa about Eskom’s outages since the end of 2014 — and now they want customers to get to know their neighbours a little better, by expanding their platform to include hyper-local information.

Knowledge is power, say the two men behind the EskomSePush app — whether that means knowing when the lights are about to go out, if your neighbours have water, if they’ve spotted your missing cat, or know where to find a church, a game of social bridge or even just some “good vibes”. More about those vibes later.

EskomSePush founders Herman Maritz and Dan Wells don’t want to keep their customers in the dark, which is why they’ve grown their popular platform to include the AskMyStreet feature, allowing users to stay up to date about hyper-local issues, ask questions and hopefully find the answers they are looking for.

Maritz and Wells explain that while many people might turn to social media such as Twitter, Facebook and WhatsApp groups for information, generic communication tools are not suited to solve the country’s unique problems: by their nature, such groups are exclusionary and do not easily facilitate hyper-local searches for information.

As an add-on to EskomSePush, AskMyStreet is an open community that allows questions to be asked and answered in a format that is either refreshed or expired after 24 hours of inactivity.

This isn’t Google, Oprah or a “bare your soul” platform, Maritz is quick to add, because these streets have to be kept clean.

This is how they do it: Some topics are simply not allowed. Maritz says, “Certain phrases or words are removed automatically through the app’s algorithms and machine learning that detect bad behaviour such as spam, scams and inappropriate aggression.”

Every user has a reputation score (called “Street Cred”) so others know who to trust. They can upvote good topics using emojis and react to messages. Users with high Street Cred can also ban or remove content from the system by reporting inappropriate behaviour. They also use filters and real-time moderation to detect and remove inappropriate content.

“The more S​treet Cred a user has, the more engaging and helpful they are. You earn your cred; you can moderate and report bad behaviour on the platform. We care a lot about what goes on on our street. We have to make it fair, where anyone can actually be helpful and then gain reputation.”

It does take time, he admits, for good users to learn and utilise their power. “We will be working on improving this as we see patterns of bad behaviour to detect and remove before people even notice.”

“We believe that our detection will be good enough to prevent any hateful content,” explains Wells.

With more than three million active monthly users, EskomSePush (ie, Eskom’s push notification, a crafty double entendre playing on the presumed Eskom Se P**s inference), the app is frequently ranked among the most popular mobile applications in the country — especially when there are rolling blackouts.

Read in Daily Maverick: “Get a load of this – these South African cities have a plan to ditch Eskom and end power cuts”

Wells joins Maritz at EskomSePush next week full-time, not only because the workload intensified this year, with increased and unpredictable power outages, but the focus is shifting to AskMyStreet.

“We have a lot of involvement because things are really unpredictable, with all the stages and schedules changing all the time. Even though we tried to automate things, most of the time things can change in an instant, with Eskom announcing a power failure at one of the power stations. So we literally have to read their statements in order to inform people.”

Do they have an “in” at Eskom? “We are quite friendly with them and luckily we receive their media statements. But it’s the same data that is sent to the media. We do follow a few other data streams, like the City of Cape Town and Power Alert, but the one we rely on most comes directly from Eskom.”

From the start, Maritz and Wells have received thousands of emails from the public, asking not just “load shedding” questions but also about power outages generally.

Ahead of the game

As a trusted brand, EskomSePush needs to stay ahead of the game, Maritz says, because people expect more from apps than before.

“So even if work was being done on powerlines, or a powerline fell on to the highway [as it did recently on the N1], people would call it load shedding, even though it’s an outage. That’s why we started building the street chat functionality because we don’t have all the answers and we cannot know what is going on in every corner of South Africa.”

Community members often know best about what is happening around them, and if there is a way to get them to share the information, then they can help others with that information.

The chat function has been around since 2019 in various shapes, though some became quite “spammy”. In March this year, AskMyStreet was finally launched as an overhauled chat functionality positioned to help people.

EskomSePush has more than five million active installations, but that’s not where the magic lies because those are not necessarily active users. Maritz says the number of daily users who actively use the app topped 2.4 million (latest figures, as at 28 June). This past Sunday, which had no rolling blackouts, 600,000 people opened EskomSePush.

How do they see AskMyStreet’s evolution? That’s not certain yet, but some users are viewing it as a Tinder-type dating site. “This past weekend, on Reddit, someone posted ‘look how many people are trying to find partners on EskomSePush. It’s like finding love in a hopeless place’,” Maritz laughs.

“I guess it’s because of the openness of AskMyStreet. Of course, we do have moderation and if you use certain words, it’s automatically banned. And we also do reporting.”

Whether neighbourhood dating will become a line of interest is yet to be determined, but the engagement numbers are great.

If — and when — things get out of hand, AskMyStreet’s algorithms are set up to detect bad behaviour. Spam, for example, is banned immediately. Certain words and phrases are verboten, and when aggression is picked up, the algorithm sends out an alert for the humans to review what is happening.

It’s a full-time job, Wells admits, which is why he is leaving his comfortable CTO position at Superbalist. “It’s going to be strange walking out of the building after almost seven years,” he says, adding: “It’ll be cool.”

Lights On, Switch To Plan B

AskMyStreet has the potential to be lucrative: With the biggest income streams currently from advertising, there is not much usage when the lights are on. This is why AskMyStreet is so important: while they provide businesses with application programming interfaces (APIs, a type of software interface, offering a service to other pieces of software) for rolling blackouts, they are also thinking about giving AskMyStreet business API access so that users can see what is happening in nearby areas.

Wells says relying on Eskom not to keep the lights on is unsustainable: if the blackouts had to stop — “which I can assure you, as any other South African, we are hoping it does” — they need a Plan B.

“We see massive value in AskMyStreet. We know that when there is load shedding, people are affected… they’re confused. They don’t have enough information and they need help,” Wells says.

“We know that, because a lot of the anger, frustration or confusion gets directed at us, which is really fine, because we try to help reduce that. But we’ve seen on AskMyStreet, if we can get people to ask their neighbours or complain to their neighbours instead of us, then they can help each other. It’s about how we can get people connected to communities that they don’t even know exist.”

Eskom CEO André de Ruyter giving EskomSePush a shoutout has been their biggest highlight so far. “He’s definitely my number one,” says Maritz.

“We had a mention in Parliament once,” adds Wells. “That was pretty cool too.”

Another highlight was a mention during former Eskom chief Brian Molefe’s opening statement at the State Capture hearings.

And in the Afrikaans version of Who Wants To Be A Millionaire?, EskomSePush was one of the answers.

“That’s next level popularity,” Wells says. “But what we really want is to get our name on a 30 Seconds card.” BM/DM