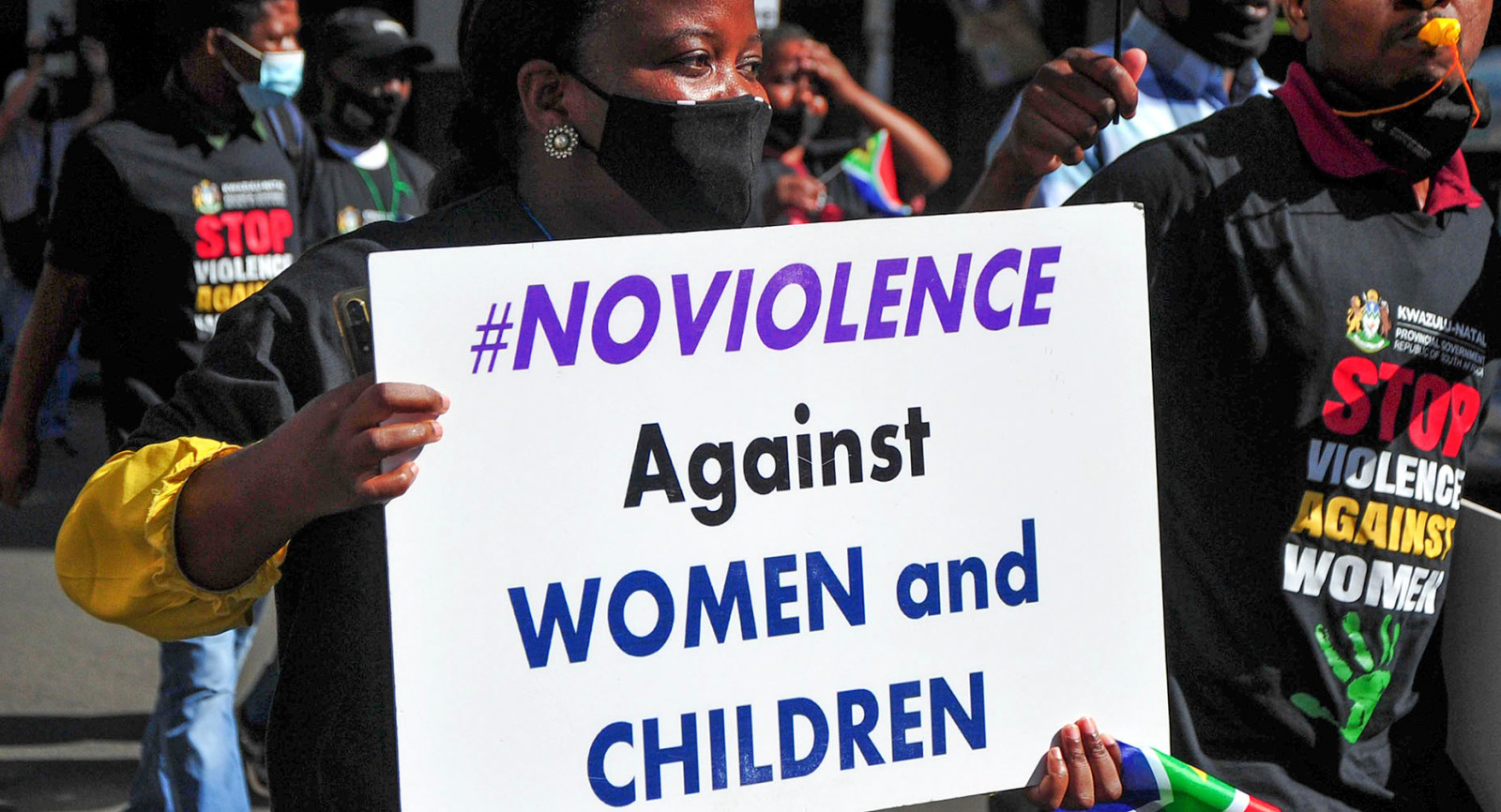 General view during the Gender-Based Violence (GBV) protest march organised by the Office of The Premier in collaboration with Phepha Foundation on 26 April 2021 in Durban, South Africa. (Photo by Gallo Images/Darren Stewart)

What we say and where we say it matters for preventing discrimination, and social media is now a priority.

In 2021, almost half of South African adults — over 25 million people — used social media. Twitter had an estimated nine million users, over 80% of whom were aged between 15 and 44. And social media is widely used for accessing news and current affairs.

This powerful medium influences public opinion and can promote and legitimise intolerance, distrust and hate, for example with campaigns like the xenophobic #OperationDudula. But it can also mobilise the public and build solidarity, as the 2015 #FeesMustFall campaign revealed.

In a country where the femicide rate is six times the global average, social media can help prevent gender-based violence. We must also ensure that it isn’t used to further generate violence.

The way we talk about things matters. Given social media’s ever-increasing reach, how we ‘speak’ online needs attention. More than ever, online and offline conversations simultaneously influence each other and have serious real-world consequences. This suggests that the boundaries between the online and offline world are becoming increasingly blurred.

The rise in social media users has been accompanied by online misogyny — expression and behaviour that reveals a deep contempt for women. A 2020 study on women’s experiences of online gender-based violence in sub-Saharan Africa shows that misogynistic discourse perpetuates and normalises unequal gender norms. This has contributed to online gender-based violence — which includes stalking, hacking and cyberbullying of women by men.

Narratives that perpetuate gender inequality in the media are nothing new and occur worldwide. The recent high-profile civil trial between American actors and former spouses Johnny Depp and Amber Heard demonstrates how prolific misogyny can become online.

During the trial, evidence emerged of misogynistic statements made by Depp against Heard. Rather than expressing disgust at Depp, much online content was aimed at humiliating Heard. Many users performed mocking re-enactments of her testimony, lip-syncing along as she recounted the alleged abuse. The audio of her crying became a TikTok trend.

Misogyny is amplified on social media perhaps because people feel at ease voicing their opinions from a keyboard or phone, at a distance or hidden behind an anonymous account.

So if social media can perpetuate misogynistic and unequal gender norms, could it be used to challenge gender inequality and prevent gender-based violence? Evidence suggests it can. South Africa’s Violence Prevention Forum, a platform for inter-sectoral dialogue to enhance safety, has demonstrated how guided conversations can shift perceptions. And right now, the conversations are on social media.

Evidence suggests that combining social media campaigns with in-person interventions delivers promising results. The Must Bol campaign in India applied these principles, using online and offline spaces for youth to engage on topics relating to gender-based violence. By using social media in accordance with Align’s four actions and in-person workshops, the intervention improved young people’s actions on the issue.

Must Bol used social media to continue conversations with youth between workshops. Online content using ‘youth language’ and subject matter generated interest and enabled a smooth transition to discussions on gender-based violence and gender norms. Like South Africa, India has high levels of gender inequality and violence against women, which suggests the intervention could be implemented here. However, it must be adapted to the South African context to ensure cultural relevance.

Interventions could use social media algorithms to send targeted messages aimed at preventing gender-based violence and promoting gender equality. South African researchers have begun exploring the use of algorithms and artificial intelligence to address the problem. This presents a collaborative opportunity for researchers and civil society to combine social media with other violence prevention interventions. The government should also run online campaigns to dispel misconceptions about gender-based violence, using Align’s four practices.

Social media users, lawmakers and civil society must realise that how we talk about gender-based violence is crucial in addressing it, and where we speak about it matters too. Whether or not we ‘like’ or re-tweet posts, social media users aren’t passive and are influenced by what we encounter online.

As a platform for diverse voices, social media provides real-time interactions, anonymity and growing privacy concerns — making it a complex place for intervention. Nevertheless, its massive reach, and its informal and dynamic nature, offer opportunities for innovation in building a safer world for women and girls on- and offline. DM