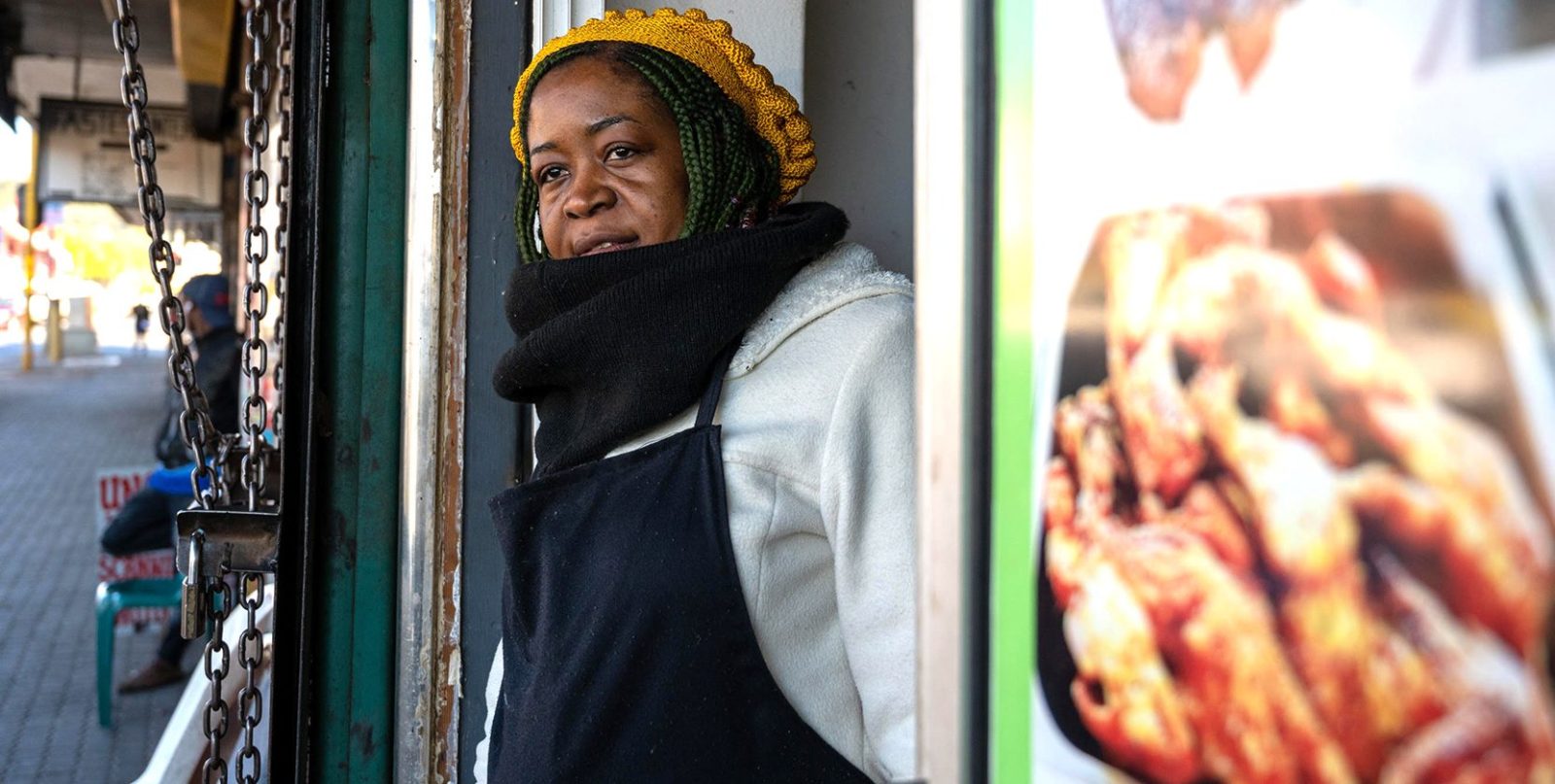 Alven Menju from Cameroon says she is planning to leave South Africa because she feels intimidated by the actions of Operation Dudula in the Orange Grove area. She is one of many foreign shop owners who recieved letters from the controversial organisation demanding that she vacates her business premises. (Photo: Chris Collingridge)

Operation Dudula continues its xenophobic persecution of foreign traders. Some foreign business owners and local community members are fighting back, with early-warning systems on WhatsApp groups alerting members to the presence of Dudula operatives in their areas – but for others the intimidation, harassment, violence and extortion have simply become too much.

She wants to leave the small takeaway business she built up over the last two years on the upper end of Louis Botha avenue in Orange Grove and flee home to Cameroon.

There she will be safe.

“My heart is not with this any more,” she says standing in the doorway of her shop.

In her hand is the letter that pushed her into making that decision to leave the country she has called home for the past decade.

Like many other foreign shopkeepers trading along one of Joburg’s busiest arterial roads, Menju received a letter from the Operation Dudula Orange Grove branch.

Many of these letters have recently been handed out across Orange Grove, according to local community activist Nigel Branken.

In Menju’s case, 17 or 18 people claiming to be from Operation Dudula arrived at her shop last Tuesday, 7 June.

She was handed the letter and even had to sign for it in acknowledgement of receipt.

On the night before the deadline ran out Menju didn’t sleep and on the day she didn’t open her shop.

“I just don’t know what they are going to come with next,” she says.

In the year that Operation Dudula has been in existence it has spread country wide with the aim of forcing out immigrants.

The driving force behind it is Nhlanhla “Lux” Mohlauhi with his shadowy past and ever-growing social media presence.

“Over the last month they have been going into people’s homes and telling foreigners that they need to leave by the end of the month,” says Branken.

Chuks, a Nigerian shopkeeper, has had three visits from alleged members of Operation Dudula. On one occasion, he said, they trashed his shop, throwing cellphones, toys and plastic buckets onto the floor.

“They asked me for the slips for these goods, but when I showed them they didn’t care,” says Chuks, who out of fear didn’t want to use his full name. He claims Operation Dudula members have also tried to extort protection money from him, wanting R500 a month. Other foreign business owners have also complained of extortion attempts by members of Operation Dudula.

Operation Dudula Orange Grove branch spokesperson Oupa Prophet Ngwato blamed the extortion attempts on a criminal element within their organisation, which he claims they are trying to root out.

Then on 8 June, four members of Operation Dudula came into Chuks’ store and handed him the eviction letter.

“It has turned everything upside down, it is time to reflect on going back to Nigeria,” says Chuks, who has had the shop for 10 years.

But foreign businesses and some members of the community are mobilising and fighting back. WhatsApp groups have become early-warning systems issuing alerts of when Operation Dudula members are in the area.

On Tuesday several Operation Dudula members were apprehended after they had allegedly intimated a Pakistani shopkeeper.

When they were confronted they apparently tried to explain away the reason they had been in the shop.

“They then said that they had gone into the shop to check on the price of heaters – that is five or six guys checking on heater prices,” says Solly Owa, a community member.

Norwood police station spokesperson Sergeant Eric Masotsha said that arrests were made for intimidation and malicious damage to property.

Owa is a member of the recently formed Orange Grove Foreign Shop Committee, which has been tasked with collecting evidence of intimidation by Operation Dudula members. They are working with the Socio-Economic Rights Institute of South Africa.

Shop keepers who have received the eviction letters have been encouraged to open cases of intimidation at the Norwood police station.

“Business owners are coming to the police station, they are opening cases and we are attaching those letters to the docket,” says Masotsha, adding that a special task team has been assembled by the Gauteng province SAPS to investigate Operation Dudula.

But while the Orange Grove branch of Operation Dudula continues to issue eviction letters, the founder of the organisation Mohlauhi has said they must stop doing so.

“Those letters that went to the shops are non void,” [sic] he said in a video he released this week.

Ngwato responded to this, calling Mohlauhi’s utterances the words of a “young populist” who should be working with the collective.

“We are not inciting violence in public, we have not actually threatened anybody, we are asking according to the law, that small businesses will be reserved for locals only,” Ngwato explains.

Asked what would happen if the business owners didn’t heed the seven-day deadline, Ngwato said that they planned to have a meeting about this on 16 June but that they would not be revealing their strategy.

“If they say that they are not going to leave we are going to ensure that in the future they toe the line, and they respond to the marching order,” he warns.

Even if Menju wanted to leave for Cameroon straight away, she couldn’t. She needs months of work to save up enough money for the trip home. It is work that starts at 6am, when it is still dark, and it is six days a week. And this is what worries her.

“You are just so exposed on the street,” she says. DM/MC