Proteas and England share ODI spoils in the rain, despi...

Proteas and England share ODI spoils in the rain, despite De Kock blitz 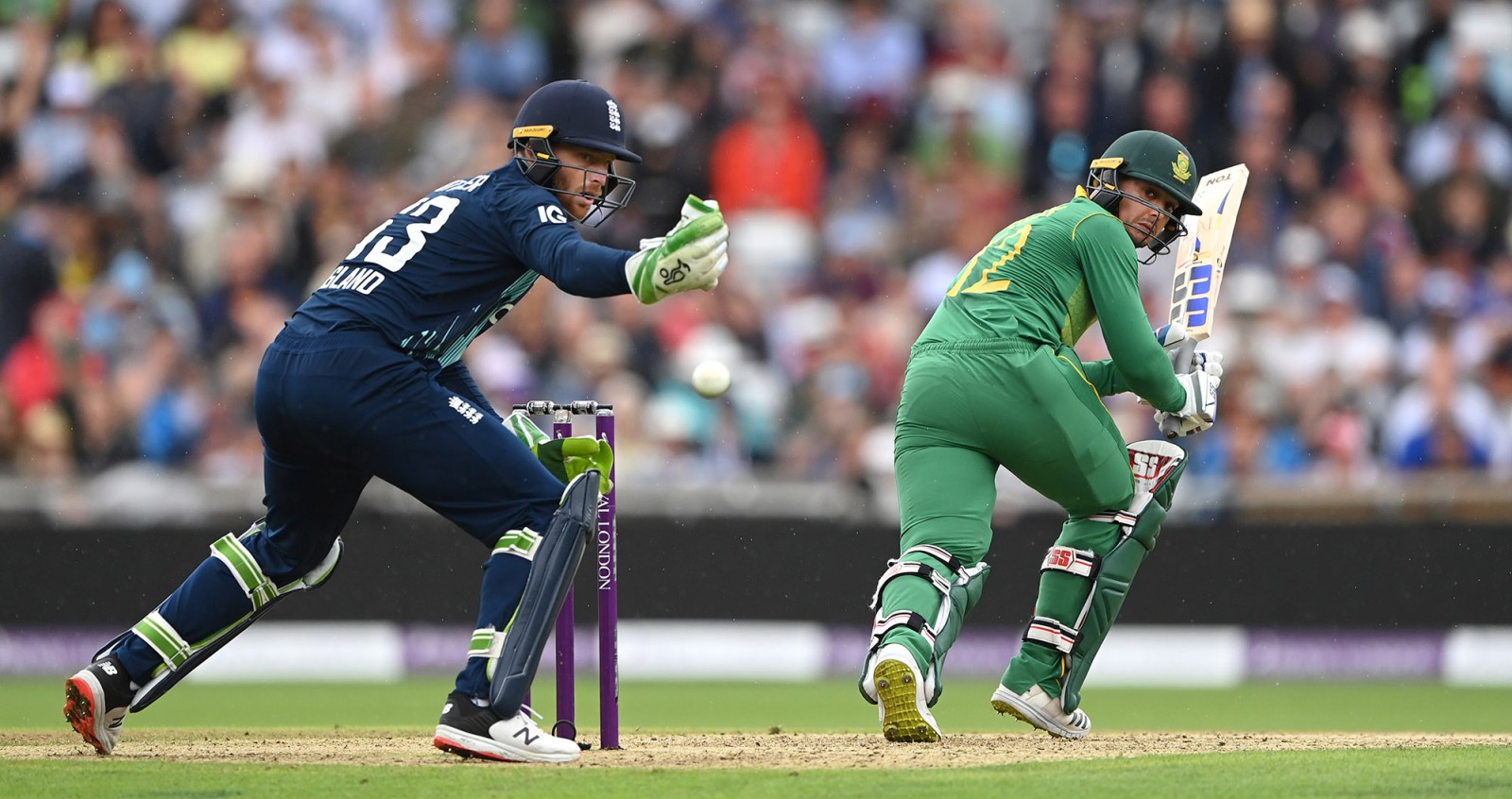 England and South Africa shared the One-Day International series 1-1 after the third and final match was rained out.

Quinton de Kock showed why he is one of the highest-rated opening batters in white-ball cricket in the deciding One Day International (ODI) against England on Sunday.

Unfortunately, his brisk undefeated innings of 92 off 76 deliveries, striking 13 elegant boundaries, came in vain as the rain in Leeds decided the outcome of the match — a no result.

Therefore the ODI series was shared between the two nations as each secured a victory, at Durham and Manchester respectively.

Despite trying conditions at the start of the innings, including cloud cover and swing movement in the wicket, stand-in skipper Keshav Maharaj elected to bat first, hoping to get off to a solid start. Wicketkeeper batter De Kock ensured that.

Back to his best

De Kock lost opening partner Janneman Malan in the sixth over through brilliant swing bowling by David Willey for 11 runs off 18 deliveries. Despite this, De Kock continued to tick on and score all around the wicket.

“It’s nice getting out there scoring runs for the guys. We’ve had a little bit of time off from our last [ODI] series. It was nice just to get out and spend some time in the middle. It’s always satisfying — whether I’m going at a high strike rate or a low strike — as long as I can just help out the team, it’s always satisfying,” said the stylish left-hander after scoring his 29th half-century.

De Kock’s 13 boundaries were all sumptuous, an exhibition of timing and placement, but none were better than the perfectly placed cover drive off the bowling of left-arm pacer Reece Topley, where he exquisitely bisected two cover fielders, placed there exactly for that shot.

Van der Dussen’s strength was his downfall as he was outfoxed by leg spin bowler Adil Rashid as he looked to kick on the scoring rate, caught in the deep — attempting a lofted sweep shot — by the safe hands of Jonny Bairstow at backward square leg.

In spite of his relative failure in the third ODI as well as a four-ball duck in the second ODI in Manchester, Van der Dussen was still awarded the player of the series award. He scored more runs than any other batter this series; thanks mainly to an excellent, career-best 134 not out in the opening ODI in Durham.

Aiden Markram joined De Kock at the crease and brought up 1,000 ODI runs with his 34-ball 24. De Kock, meanwhile, was just eight runs shy of a well-deserved 18th ODI century when the rain fell for a second time in the day; this time harder than before as the umpires called both teams from the Headingley field for the final time. South Africa were 159 for two after 27.4 overs at the time.

South Africa’s search for a first ODI series victory since 1998 in England continues.

The ODI series began in extreme weather. Record heat in the first match in Durham saw debutant fast bowler Matthew Potts leave the field after bowling only four of his allotted 10 overs.

The second ODI in Manchester saw the match reduced to 29 overs due to intermittent rain while the final ODI in Leeds saw the match totally abandoned due to persistent rain.

Like the weather, the Proteas’ performances in the ODI series were hot and cold.

In the opening match, the Proteas were at their very best, a clinical and complete display with both bat and ball as they posted 333 for five before bowling England out for 274 in 47 overs.

“If you look at the first ODI, it’s probably our most clinical performance in the last 18 months. If we can just replicate our mindset towards how we approach games. The adaptation of the wicket was the most crucial thing,” said captain Maharaj.

The rain-curtailed 29-over ODI match then ensued in Manchester. England posted a chasable 201 all out before the Proteas batting crumbled for 83 all out, their second-lowest total in ODI history.

“It wasn’t ideal after putting in such a spectacular performance with the bat in the first ODI. I think our ODI batting unit has done relatively well in the last 18 months and been consistent. Any sort of give and take and understand, it was bound to happen. I think the boys understood where we went wrong and showed some rectification of it today,” said Maharaj.

The Proteas batters — led by De Kock — stood tall at Headingley and looked set to score a competitive total, but unfortunately the English weather had other ideas — as it has so many times in the past.

The Proteas have an uphill battle to qualify for the 50-over World Cup, as they currently languish in 11th position in the 13-team log. However, stand-in skipper Maharaj believes South Africa will qualify for the global event in India next year.

“If we keep building on the things that we’ve done, I think that we should be okay. It’s a tough schedule ahead with the countries we have to play for points, but we’ll take that in our stride as it comes,” he said.

Both teams now turn their attention to the T20I series which begins on Wednesday, 27 July at Gloucestershire. DM