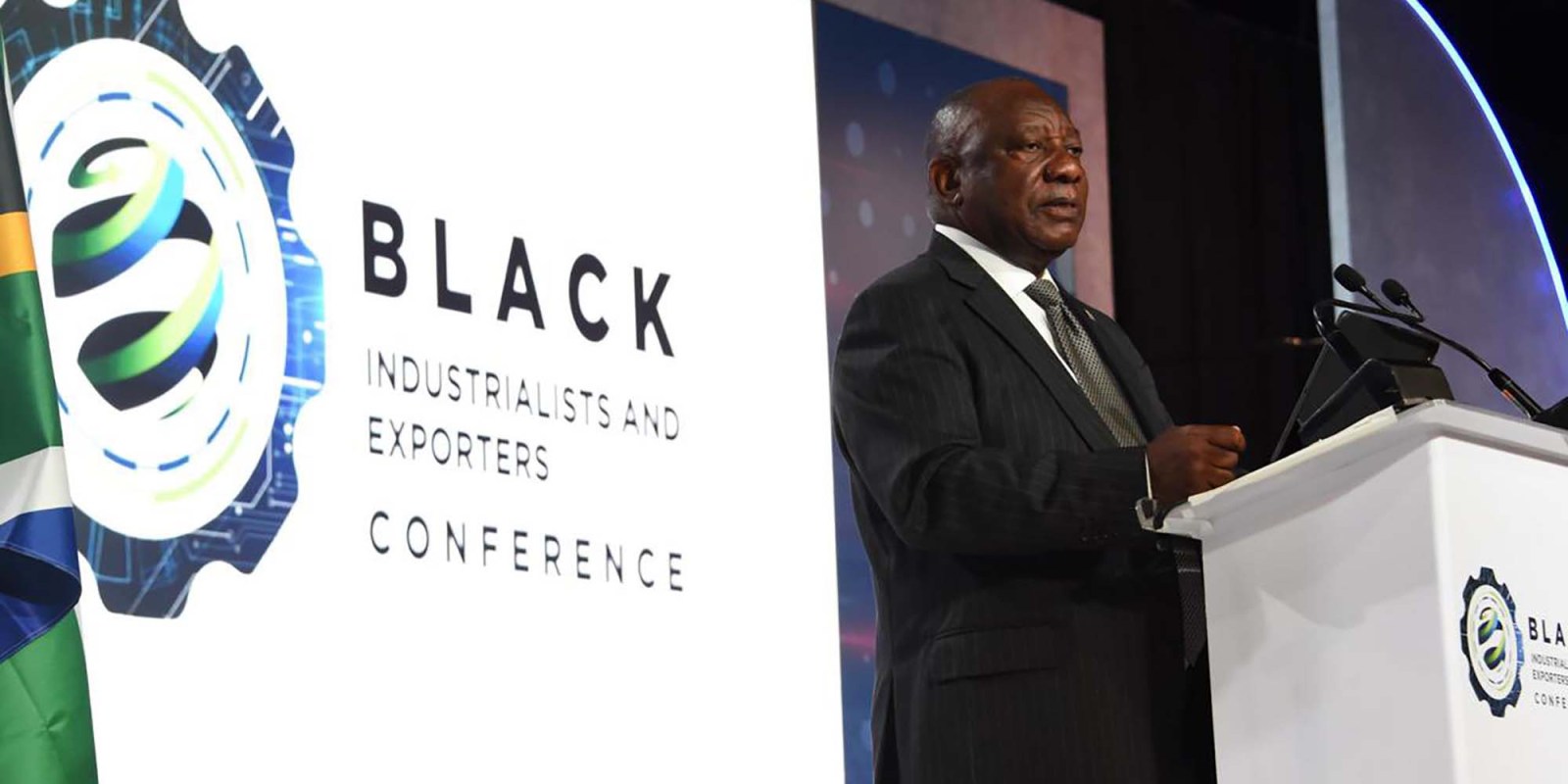 President Cyril Ramaphosa at the opening of the first Black Industrialists and Exporters Conference at the Sandton International Convention Centre in Johannesburg on 20 July 2022. (Photo: Twitter / GCIS)

The government has given a report card on its black industrialist programme, which was launched in 2015 to help historically disadvantaged individuals to participate in the economy and ownership of industries.

Over the past six years, according to government figures, about 900 black industrialist businesses have been given R44-billion in funding under the programme. The money came from the Department of Trade, Industry and Competition, state-owned development finance institutions and other agencies. These businesses have reportedly created and supported 70,000 jobs.

The value of the funding swells to R55-billion over an extended 12-year period, when including other government initiatives that are aimed at supporting black-owned and black-managed businesses.

These figures were revealed by Ebrahim Patel, Minister of Trade, Industry and Competition, on Wednesday on the sidelines of the inaugural Black Industrialists and Exporters Conference held in Sandton, Johannesburg.

Now, years later, the government has exceeded its target of creating black industrialists and has allocated them more funding than was initially targeted.

The programme focuses on expanding South Africa’s industrial capacity while boosting black entrepreneurs and reducing their barriers to market entry. The programme, tied to the government’s Broad-Based Black Economic Empowerment (BBBEE) objectives, is also about changing the ownership patterns of South Africa’s economy.

At first glance, the concept of “black industrialists” may seem like more hyped jargon put out by the government to reboot the BBBEE policy, which has been heavily criticised in some quarters for creating wealth for a coterie of politically connected individuals.

A department of trade and industry policy document describes black industrialists as “black people directly involved in the origination, creation, significant ownership, management and operation of industrial enterprises that derive value from the manufacturing of goods and services at a large scale; acting to unlock the productive potential of our country’s capital assets for massive employment locally”.

An industrialist must be part of an entity that is at least 50% owned by black people and actively involved in the management and operations of the business. Black industrialists must have a minimum investment of R30-million in their businesses and should secure or increase direct employment.

How it works is that the black industrialist programme offers entrepreneurs grants and loans from the Industrial Development Corporation (IDC) and National Empowerment Fund (NEF) – whose operations involve the government – and other development finance institutions.

After black industrialists receive funding, the government and state-owned entities use their muscle to procure goods from industrialists in order to scale them up. The government is a huge procurer of goods and services, spending more than R1-trillion every year on this function.

Patel said one-third of all procurement by National Treasury, and national and provincial government departments across South Africa, would be drawn from black entrepreneurs and industrialists. Patel wasn’t able to say whether black industrialists who received funding were able to be financially successful or service the conditions of the loans they received.

One criticism of the programme is that there is a high concentration of entrepreneurs funded in traditional sectors such as agriculture and agro-processing, metals and mining, and other manufacturing – with limited export opportunities for businesses.

Meanwhile, there are many businesses in the renewable energy space that require funding but haven’t received it because of the government’s opaque policies around electricity procurement.

And given South Africa’s power constraints, it is hard for black industrialists in the manufacturing sector – which requires a stable energy supply – to thrive.

Patel acknowledged this problem. “Business confidence is eroded when we don’t have a secure supply of energy,” he said.

President Cyril Ramaphosa is expected to unveil his emergency electricity plan on Thursday, 21 July. The plan seeks to add more megawatts to the national grid and, in turn, ease the pain of Eskom’s rolling blackouts inflicted on households and businesses. DM/BM