A shopper checks a loaf of bread in a grocery store in San Francisco, California. (Photo: David Paul Morris/Bloomberg)

A rate hike is imminent. South Africa's Consumer Price Index (CPI) charged to a 13-year high. The data, released on the eve of the next interest rate decision, leaves no doubt that a hike of at least 50 basis points is on the cards.

In June, the country’s CPI raced to a 13-year high of 7.4% on an annual basis, as food and fuel prices sizzled and burned a hole in the pockets of hard-pressed consumers. The data, released on the eve of the next interest rate decision by the central bank’s Monetary Policy Committee (MPC), leaves no doubt that a hike of at least 50 basis points is on the cards.

Consumer inflation just keeps on accelerating. After hitting 6.5% in May, it quickened to 7.4% in June, Statistics South Africa said on Wednesday. This exceeded expectations and takes CPI further outside the 3 to 6% target range of the South African Reserve Bank (Sarb). This is its highest read since May 2009, when it hit 8% against the backdrop of the global “Great Recession”.

The South African economy may well be in the throes of a recession. With an unemployment rate of more than 34%, demand pressures are hardly behind this concerning state of affairs, which will squeeze the poor and working classes the hardest. 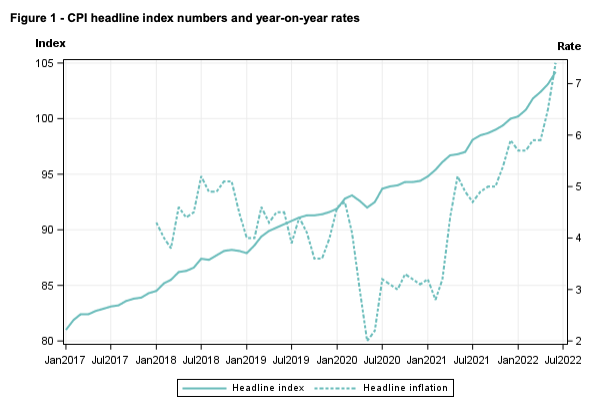 The main accelerants are still food and fuel price pressures, and these will be further inflamed by the weak rand, which at more than 17/$, is looking vulnerable to a further slide. Food inflation hit 9% in the year to June, while consumer transport prices rose 20% year on year. Fuel inflation is running at 45.3%.

All of this is also seen as firing up wage demands, which one would expect perhaps to be more muted, given the levels of unemployment.

“Our call is still for a 50 basis point rate hike, although there are risks, given Sarb concerns over wage demands,” said Razia Khan, Chief Economist for Middle East and Africa at Standard Chartered Bank in London.

Given the external pressures involved, some commentators argue that rates are a blunt tool that cannot really stem the rising tide of South African inflation. And with the economy quite possibly sliding into recession, higher borrowing costs are another body blow that it does not need.

Luigi Marinus, Portfolio Manager at PPS Investments, points out in a commentary on the data that such a view ignores “second-round” inflationary effects, which are high on the MPC’s radar screens.