‘Still a lot to work on,’ says Bok coach Jacques Nienaber after series win against Wales 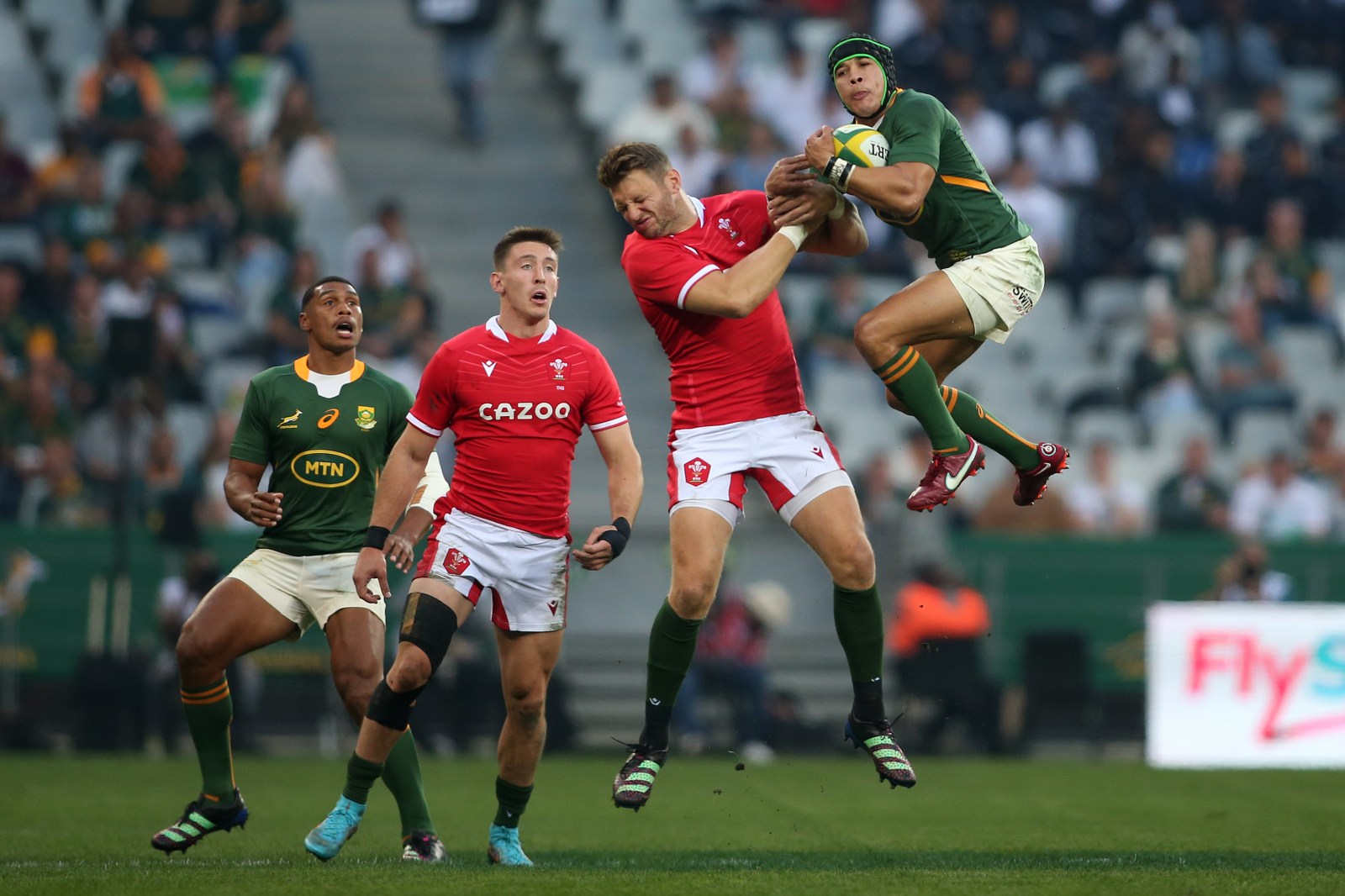 Lack of cutting edge on attack and an injury concern over Cheslin Kolbe left Springbok coach Jacques Nienaber with a furrowed brow after a 2-1 series win over Wales.

The Springboks clinched a comfortable 30-14 victory over Wales in Cape Town on Saturday to secure the tightly fought incoming series 2-1 against their northern hemisphere rivals.

Despite the dominant performance, Springbok coach Jacques Nienaber still believes there’s more to come from his charges with the Rugby Championship fast approaching.

“I still think there’s a lot for us to work on. We created a lot of opportunities similar to last week which we didn’t capitalise on,” said Nienaber on Saturday.

“I think there’s still a lot to build. It’s not a polished performance. I thought the set-pieces functioned well, but still there were a couple of hiccups there at scrum time.

“We’re still getting used to the brake foot thing. It’s something that the northern hemisphere also struggled with in the Six Nations and they got the hang of it. We will get better at that. We will have to build a lot still in terms of where we are,” said the coach.

The “brake foot” rule was introduced during this year’s Six Nations Championship and requires hookers to have a foot forward during the referee’s calls of “crouch” and “bind”. It can only be withdrawn on the call of “set”.

The Springbok defence just about kept Wales at bay throughout the match with the Dragons only scoring one excellent try in the first half through flanker Tommy Reffell. The remainder of their points were scored via the boot of flyhalf Dan Biggar.

“In defence, we built on that nicely,” Nienaber said. “If you think [of] the first Test, our defence wasn’t the best department on the field. I thought we got better in the second Test. The team we selected there, they really defended well. [The defence] was better than the first one.

“Today there were passages I felt we could have done better. Wales had a good plan of keeping the ball alive and not getting to breakdowns so we had to adjust at halftime, but you can’t fault the players in terms of how personal they made the collisions in defence and that’s all we can ask,” said Nienaber.

Captain Siya Kolisi, meanwhile, said his side went into the decider with a “finals mentality” as they celebrated Eben Etzebeth’s 100th Test match and Bongi Mbonambi’s 50th Test for their country.

“We treated it like a final. Wales are a strong team. They challenged us these past three games. We had to make it really special for us and the country, but also for Eben [Etzebeth] and Bongi [Mbonambi],” said the skipper.

“We’re grateful they didn’t make it about themselves. They wanted the team to win firstly and that’s honestly the best gift we can give to them. They’ve been amazing for us as a team. We can never question their character or what this team means to them. I’m so grateful I could be out there with both of them.

Around the 20th minute mark in the first half, flyer Cheslin Kolbe went down with a suspected fractured cheekbone. The seriousness of the injury will be assessed this week, but it looks as if Kolbe might be ruled out of the early part of the Rugby Championship.

With no specialist wing on the bench, Nienaber was forced to reshuffle his backline with Willie le Roux coming from the bench and going to fullback while starting fullback Damian Willemse moved to inside centre. Inside centre Damian de Allende shifted to outside centre while his regular partner, Lukhanyo Am, took Kolbe’s place at right wing.

“It’s not ideal, especially when you go with a six-two split [on the bench]. I know people talk a lot about the bomb squad and the six forwards coming on, but it always comes with a risk. It’s not always ideal when you lose one of your backs and especially a quality back like Cheslin so early on in the game,” said Nienaber.

The Springboks were left with only one backline player, Faf de Klerk, on the bench for the rest of the match.

“We probably would have loved to put Faf [de Klerk] on a little bit earlier, but unfortunately we had to keep him back,” added the coach.

Around the 35th minute — the one forward who could possibly play in the backline — Kwagga Smith was sent on to replace No 8 Jasper Wiese — a tactical change, according to Nienaber.

“I thought Jasper was phenomenal in the carries and those long passages when we were in their 22 — which we didn’t convert — and he just spent a lot of energy there. We thought to counter their breakdown, Kwagga [Smith] was a good introduction into the game. It was just a tactical decision that we made,” he said.

The Springboks now have the Rugby Championship to look forward to with their first match scheduled against New Zealand on 6 August in Nelspruit. DM