WINTER IN A POT 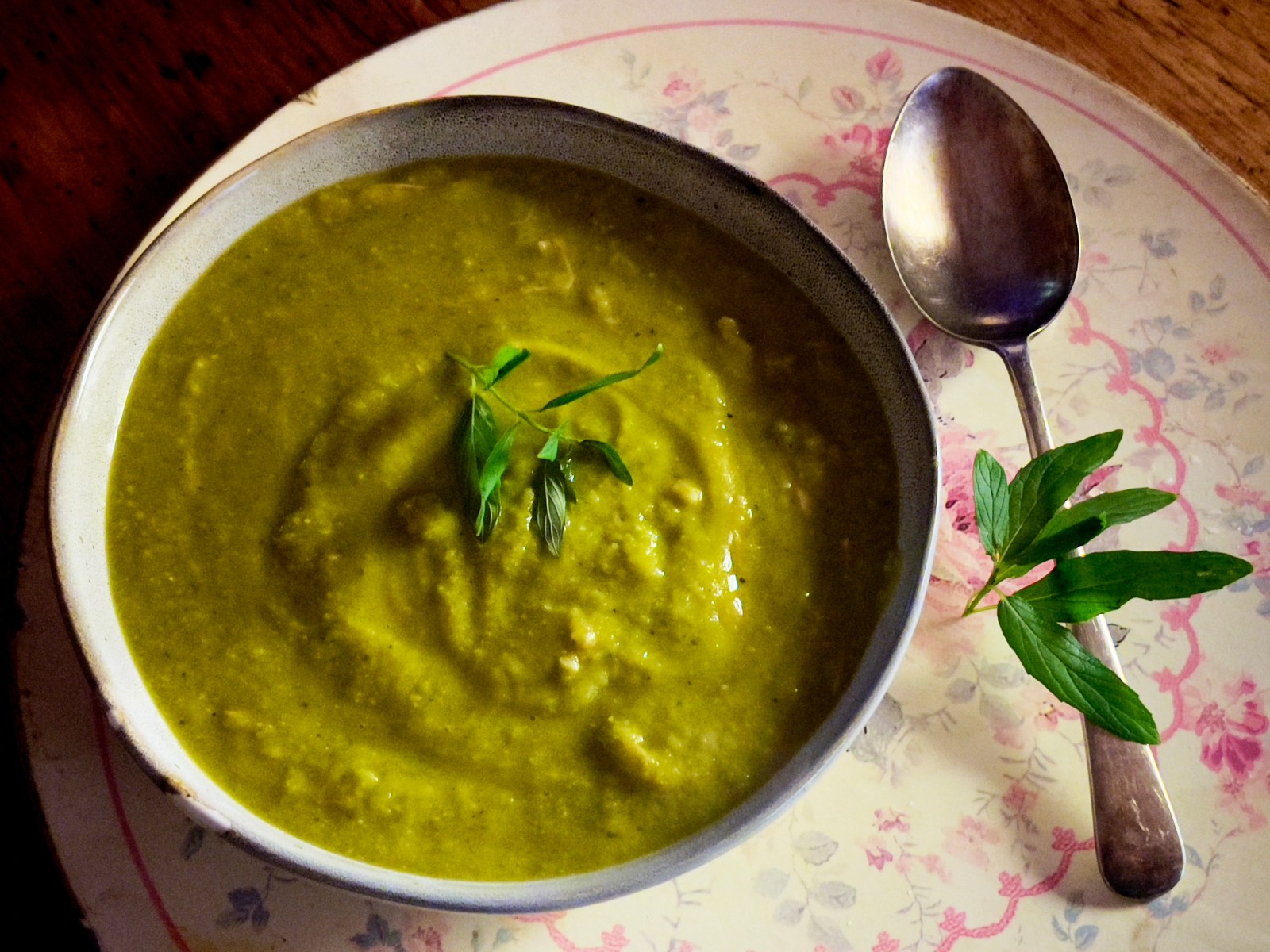 Peas and pork. Some things might not seem to go together but just do. And a pea soup that is made with a joint of pork in it is not popular all over the world for nothing. There’s hardly any dish in the world more soul-warming on a cold winter’s day.

In my own northern English culture, pea soup is as Yorkshire as parkin and best bitter. The dense, impenetrable fogs in any British city town or dale is called a pea-souper; it’s in the English culture the way the winter chill gets in the bones. It is likely also to have its origins, in Blighty at least, in that peculiar old tradition of pease pudding, or pease porridge, a boiled “pudding” of split peas and other vegetables cooked with a pork joint in the pot.

In London, says Gourmet Traveller, a very heavy pea soup is called a London Particular, “after the heavy fogs that enveloped the city in Charles Dickens’ day”. The publication also points out that the roots of a pea soup (the dish not the fog) may go all the way back to ancient Greece.

When I grew up I realised that a pea and ham soup is as Dutch as it gets too. And it’s equally popular in Germany. In the Netherlands, it’s called snert or erwtensoep, and made with pork, carrots, leeks, celery or celeriac, onions and potato, with rookworst slices added at the end. The soup travelled to its former colony Indonesia too; and it’s possible that this was how it first came to the old Cape colony. The Dutch did get there first, after all, but don’t tell the British.

In Sweden and Finland, pea soup is what we would today call “a thing”: “Consumption of pea soup in Sweden and Finland dates back to at least the 13th century, and is traditionally served on Thursdays. This is said to originate in the pre-Reformation era, as preparation for fasting on Fridays. The tradition of Thursday pea soup is common in restaurants, schools, military messes and field kitchens, as well as in homes, and it forms an unpretentious but well-liked part of social life.” (Wikipedia) Not to be outdone, in nearby Denmark “the dish can be dated to 1766 in written sources, but might have originated as early as the Bronze Age, when dried peas and cabbage became popular vegetables for the long winters there”. Finnish soldiers eat pea soup with pancakes.

In Canada, soup aux pois is a staple of Québécois cuisine. In A Century of Canadian Home Cooking (1992), Margaret Fraser and Carol Ferguson describe “the most authentic version of Quebec’s soupe aux pois” as using whole yellow peas, with salt pork and herbs, with pork chopped and added afterwards, “or sometimes removed to slice thinly and served separately … Newfoundland Pea Soup is very similar, but usually includes more vegetables such as diced turnips and carrots, and is often topped with small dumplings called dough boys or doughballs.”

Old fashioned pea soups were almost invariably made with split peas which are soaked for a long time before you start cooking it. Today, however, there’s a trend for making it using frozen peas, and the techniques for making the two styles of soup differ.

The best pea soup needs that pork component, but I chose, this week, to combine the old and new styles. So I began by simmering chopped onion, carrot, celery and leeks gently to get the flavour going, then added a big, fat pork shank. Only after hours of that cooking in water did I finally add a big bag of green peas, straight from the freezer into the pot.

Here’s how I did it…

A handful of mint leaves, chopped or broken by hand

A few grindings of nutmeg

In a large, heavy soup pot, simmer the chopped vegetables and garlic in olive oil, stirring now and then, until softened. Add the pork shank and cover with water plus 500 ml extra, and a tablespoon of coarse salt. Put a lid on, bring to a boil then turn down to simmer, covered, for three hours. Add the grated potatoes and return to a simmer for another half hour.

Use tongs to remove the pork to a bowl or bakkie, and let it cool until you can handle it.

Add the peas and mint to the soup pot, season with salt and pepper and nutmeg, bring to a boil, reduce to a simmer and let it cook for 10 minutes, then use a hand-held blender to process it until fairly smooth.

Pull away the skin of the pork and discard it, then prise off all the meat from the bone, shred it, and return it to the pot. Simmer the soup for another 15 minutes or so for the shredded pork to meld into it.