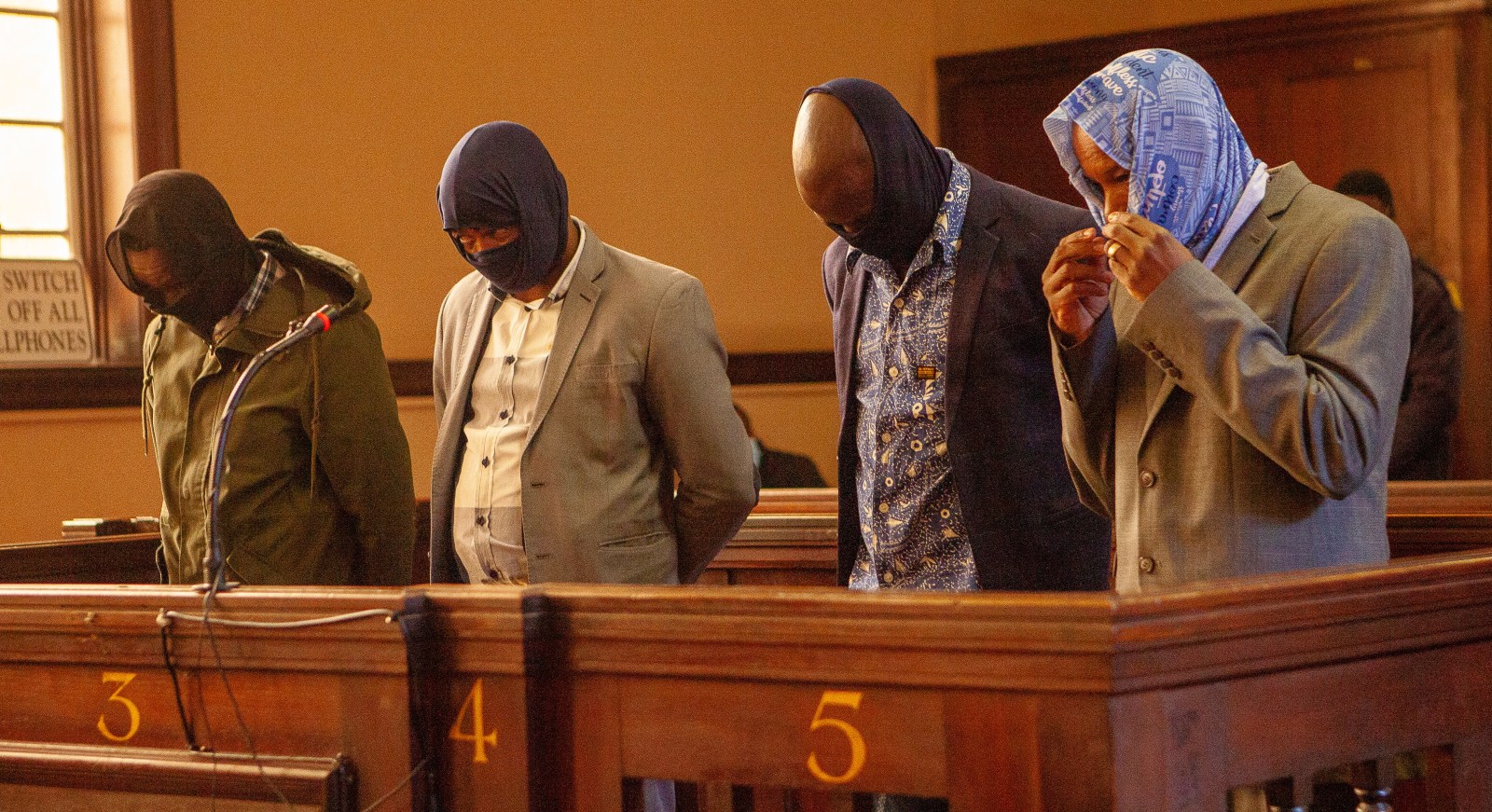 Tshephisho Kekana,27, Cidraas Motseothatha, 43, Madimetja Legodi, 37, and Victor Mohammed (51) appear at the Johannesburg Magistrates’ Court on 21 May 2021 in connection with the murder of Mthokozisi Ntumba. Ntumba was shot and killed when police fired rubber bullets at protesting students in Braamfontein on 10 March 2021. (Photo: Gallo Images / Papi Morake)

Police must commit to standards and better controls of rubber bullets in public order policing situations.

Tuesday’s acquittal of the four South African Police Service (SAPS) members charged with killing Mthokozisi Ntumba was met with widespread shock. Ntumba, 35, died on 10 March 2021 after being shot with rubber bullets while leaving his doctor’s rooms in Braamfontein, Johannesburg. Evidence indicates he was fired at for no reason by police who were responding to a student protest.

Police in South Africa who misuse rubber bullets are hardly ever held accountable. Cases are difficult to solve using investigation techniques as the evidence can’t always be conclusively linked to specific police members. As a result, the Independent Police Investigative Directorate (Ipid) struggles to resolve them.

Ntumba’s death forms part of a history of indiscriminate, reckless and excessive use of rubber bullets by police and other security personnel. The SAPS doesn’t adequately control the use of rubber bullets or enforce proper internal accountability for their use. Along with Ntumba, there have been several deaths and many incidents of serious injury from rubber bullets in recent years.

And because there’s little chance of accountability and a lack of true commitment by police to control their use, misuse of this ammunition is likely to continue.

Since it was established in 2012, Ipid has received over 1,000 complaints about police use of rubber bullets. This large number reflects the lack of clear standards on their use and uncertainty in the SAPS about what constitutes misuse.

The death of Andries Tatane during a service delivery protest in 2011 was the first to highlight the potentially lethal impact of rubber bullets. Despite being shot at close range, no police were convicted for his murder. In the 11 years since, as many as 90 people may have died as a result of rubber bullets.

If not fired at close range, these bullets usually don’t cause serious injuries unless people are hit in the eyes. In numerous incidents, victims have permanently lost sight in one eye. Young children or the elderly and frail are also more vulnerable if hit.

Flagrant misuse of rubber bullets by police is fairly common. Various incidents were documented during the #FeesMustFall protests at the University of the Witwatersrand in 2016. Numerous allegations suggest widespread misuse of this ammunition during the 2021 protests in Braamfontein, where Ntumba was shot.

Accountability for these abuses is at best extremely limited. A 2021 analysis of 1,157 Ipid cases involving rubber bullets by the Viewfinder journalism project concluded that “not a single officer was disciplined or criminally convicted for the misuse of rubber bullets for any of the cases in the sample.”

The single exception is a conviction after an internal disciplinary hearing of a SAPS member for shooting 14-year-old Ona Dubula at point-blank range in 2017. The officer received a final written warning. Such warnings expire after six months, and are then removed from the member’s file. This single case of accountability was linked to the fact that the incident was captured on television. But as the Tatane and Ntumba cases show, video evidence is no guarantee of justice.

From an investigative point of view, rubber bullet cases are generally extremely difficult to solve. Officers who fire lethal rounds can’t be identified conclusively, even with video evidence. This is because of the police culture of silence, the difficulty of identifying police wearing protective equipment, and the chaotic nature of many public order situations. Also, ballistics cannot link rubber bullets to the shotgun used to discharge them.

In some countries, public order police wear numbers or other forms of identification visible at a distance. SAPS doesn’t require this, even though it was recommended in the expert panel report on crowd management submitted to South Africa’s police minister in 2018.

Public order police should have clearly visible numbers on their helmets to improve their identification. However, it may still not be possible to confirm which specific SAPS member’s rubber bullets caused a person’s injuries.

Due to the limits of solving these cases, Ipid should not just investigate individual police suspected of misusing rubber bullets but also record data on the units and commanders linked to each complaint. Units with the highest number of transgressions should be identified, and their commanders should get support to tackle the problem.

Ultimately, however, the use of rubber bullets can only be controlled effectively if the SAPS commits itself to much higher standards regarding their use. Criteria must be developed and backed by training and systems of command to ensure adherence.

These standards must emphasise that in public order situations, police must avoid harming any members of the public who are conducting themselves peacefully. As the tragic death of Mthokozisi Ntumba illustrates, this is not something the SAPS can currently be relied on to do. DM

This analysis is funded by the Hanns Seidel Foundation.