Emotions on hold as Mum Tatjana takes on Aunt Ons in Wi... 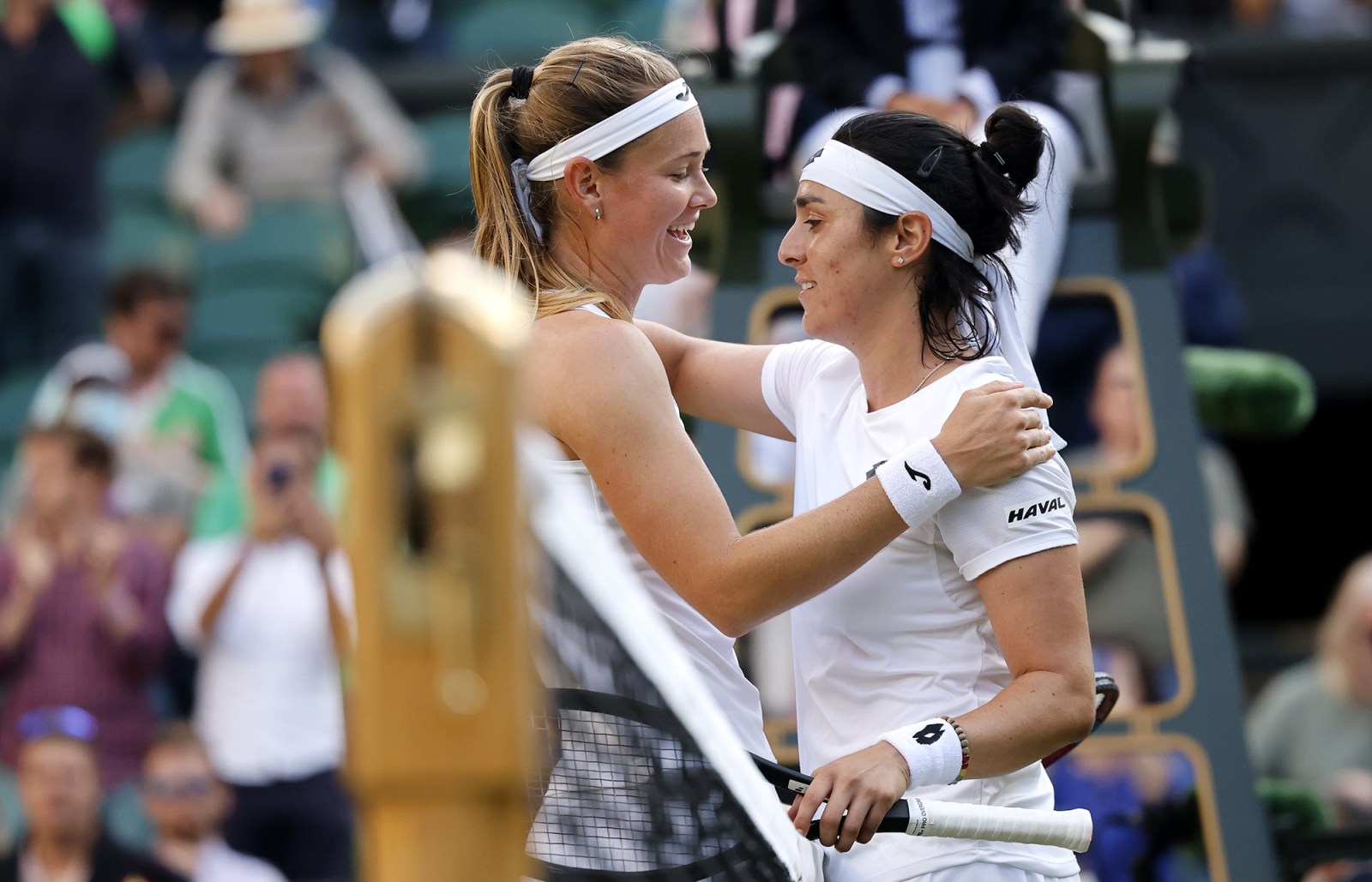 Ons Jabeur (right) of Tunisia is congratulated at the net by Marie Bouzkova of the Czech Republic after winning the women's quarterfinal match at Wimbledon on 5 July 2022. (Photo: EPA-EFE / Tolga Akmen)

When barbecue buddies Ons Jabeur and Tatjana Maria step on to Centre Court for their Wimbledon semifinal on Thursday, the loyalties of an eight-year-old German girl who will be sitting in the players’ box will be severely tested.

Mum-of-two Tatjana Maria’s run to the last four has been the feel-good story of these championships, with the 103rd-ranked German finally making the grade at the 49th attempt.

But considering she will be facing an opponent her eldest daughter Charlotte calls “Aunt Ons”, there will be a friendly celebration at the end, no matter who emerges victorious and earns the right to face either 2019 champion Simona Halep or Kazakhstan’s Elena Rybakina in Saturday’s final.

“I was joking with Charlotte, I was telling her, ‘Are you going to support me or your mom?’ I’m trying to turn all the kids to my side,” joked Tunisia’s Ons Jabeur, the first Arab to reach a Grand Slam singles semifinal.

World number two Jabeur will be the overwhelming favourite to win the showdown against her friend, whose best showing at a major was a solitary third-round run at the All England Club in 2015. Of her previous 48 attempts, she did not even progress past qualifying 14 times.

But the one thing going in the 34-year-old’s favour is that she knows she has the weapons to topple Jabeur, having beaten the third seed in their only meeting on the main tour.

“I always believed that I have something inside … that I can do this. But to be now here in this spot…” said Maria, who has had to juggle nappy changing duties with her on-court commitments.

“I mean, one year ago I gave birth to my second daughter. If somebody would tell me one year later you are in a semifinal of Wimbledon, that’s crazy.

“[I want to] show everybody that I’m still here and I’m a fighter, and I keep going and I keep dreaming. That’s what I want to show my kids.”

Jabeur is also determined to inspire the next generation with her groundbreaking run as she targets becoming the first Arab and first woman from Africa to win a major.

She was spurred on by former Moroccan player Hicham Arazi to finally break through the quarterfinal barrier at the slams.

“Hicham told me, ‘Arabs always lose in the quarterfinals and we are sick of it. Please break this,’ ” Jabeur said with a laugh.

After her win over the Czech Marie Bouzková, she received a follow-up text from Arazi.

“He was like, ‘Thank you for finally making the semifinal. Now you can really go and get the title.’ ”

The only one in the last-four mix who knows what it is like to hold aloft the oversized Venus Rosewater Dish is Halep.

The Romanian was not even considered a title contender this time around as she has slipped down the rankings to 18th after a torn calf muscle wrecked her 2021 season and prevented her from showing up at Wimbledon 12 months ago.

That no-show meant she also missed out on opening the second day’s play on Centre Court, an honour usually reserved for the defending women’s champion.

She knows that the only way she can earn that privilege again is “by winning again”.

As the only contender who has yet to drop a set at these championships, the twice Grand Slam champion is now looking like the woman to beat, and Rybakina will have her work cut out if she is to defeat Halep for the first time in a completed match.

In three previous meetings, the world number 23’s only success was when Halep retired injured.

“I feel ready to go. I feel good physically. Mentally as well. Yeah, I feel ready for tomorrow,” Halep said.

Big-hitter Rybakina, who would have been excluded from this year’s Wimbledon had she not switched allegiance from Russia four years ago, has so far fired down a tournament-leading 44 aces and will be hoping that she has enough firepower to wear down Halep.

“I just know that I have to play till the end because she’s a great fighter,” said Rybakina, who will be bidding to become the first Kazakhstan player to reach a major final. DM