Proteas women draw with England as rear-guard action an... 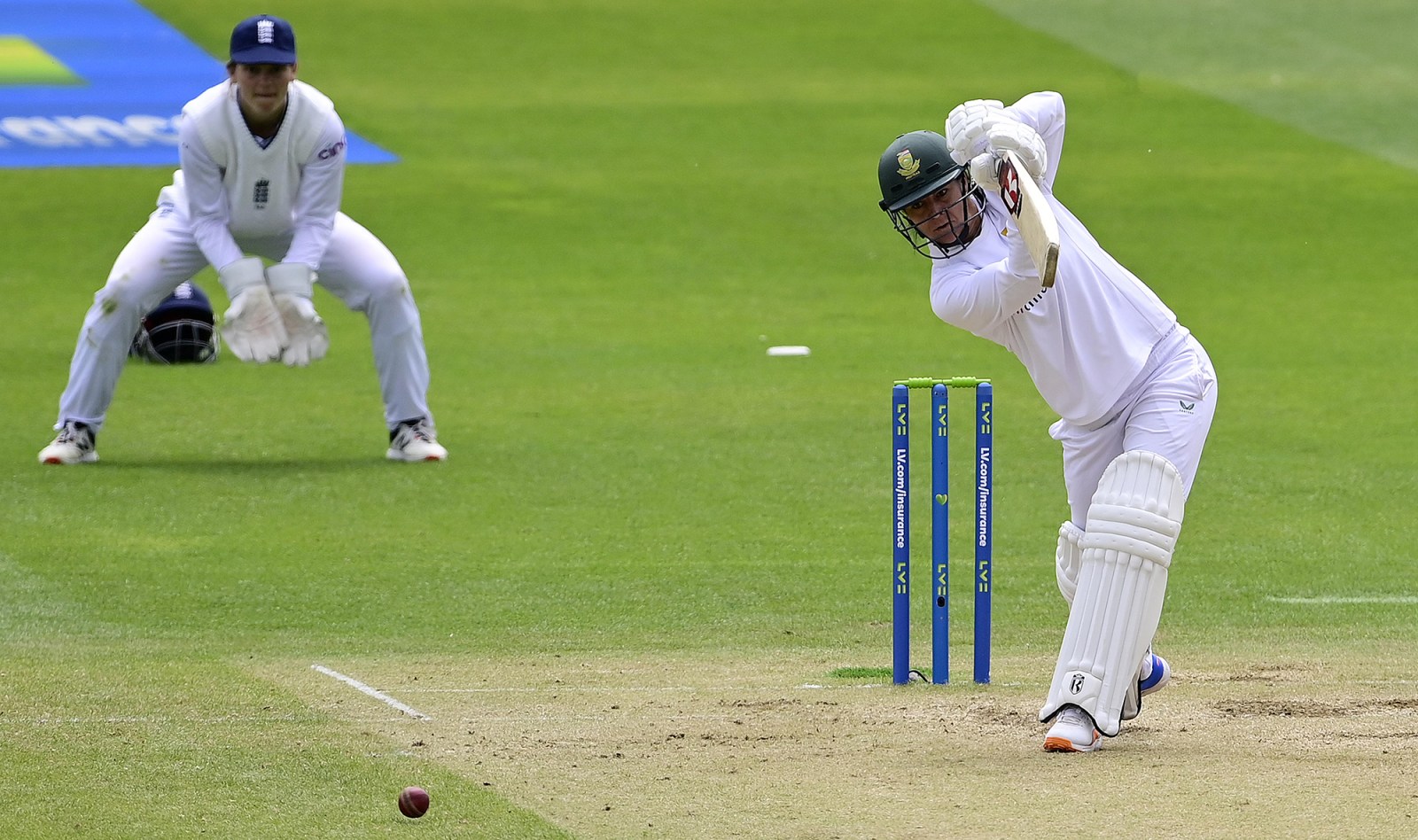 Marizanne Kapp of South Africa plays a shot on day four of the Test against England at County Ground in Taunton on 30 June 2022. (Photo: Tom Sandberg / PPAUK)

It was a damp ending to a match the Proteas women have waited eight years to play, but a scintillatingly triumphant one, with Tumi Sekhukhune’s marathon knock emblematic of the team’s fighting spirit.

The Proteas women proved their fighting spirit with an excellent rear-guard defensive masterclass to ensure a draw against an England side desperately fighting for a win at County Ground in Taunton.

Nobody encapsulated the team’s desire to put up a fight in their first Test match since 2014 like the diminutive Tumi Sekhukhune.

Coming in to bat late on day three, as nightwatcher, with the Proteas in the precarious position of 45 for three, Sekhukhune showed her mettle, batting all the way to the close of play on day four, scoring 33 runs while facing a mammoth 134 balls. An exceptional effort from the regular number ten batter – who also faced 39 balls for her nine runs in the first innings – to help her side secure a draw.

“I think if Tumi’s innings didn’t show the character and the fight [of the team] and didn’t persuade a lot of people back home then I don’t know what’s going to,” said Proteas skipper Suné Luus after the match.

However, while Sekhukhune was seemingly the protagonist of a thrilling tale waiting to be written, it was, as it has been so many times, the rainy weather in England that was the main antagonist in a Test match seemingly destined for an exciting finish.

“You’d always love to have four days of sunshine, but I guess we’re playing in England so you’re not always going to get that,” said Luus.

With 100 overs scheduled for each of the four days, the weather ensured only 88 were completed across the final two days – a damp ending to a match the Proteas women have waited eight years to play.

With some cloud cover, South Africa were asked to bat by England captain Heather Knight on day one. Facing a swinging red Dukes ball in slightly overcast weather proved tough going for the Proteas batters initially as they slumped to 45 for four within 20 overs.

Marizanne Kapp then played what she describes as the best innings of her career, smashing the highest Test score by a South African – 150 off 213 deliveries – as she guided the tail to a respectable 284 all out.

The weather began to clear and the pitch flattened out on day two as the hosts piled on the runs. England were initially halted by the right-arm medium pace of Anneke Bosch who managed to extract some away swing movement as she picked up three top-order wickets.

However, senior player Natalie Sciver and debutant Alice Davidson-Richards struck excellent centuries on their way to 207 runs in a sixth-wicket partnership.

Davidson-Richards was dismissed on the final ball of play on day two by Sekhukhune for 107 off 194 deliveries, while Sciver continued her domination into day three, eventually finishing on an incredible 169 not out, off 263 deliveries, striking 21 fours.

With scattered rainfall interrupting play intermittently, England declared on 417 for eight, leaving South Africa the seemingly improbable task of passing England’s score with the bat and then setting them a total to chase with a little more than a day to play.

England’s decision to declare looked to have paid off as they had South Africa languishing at 55 for three at the close of play on day three, with Luus and nightwatcher Sekhukhune at the crease.

“[On day three] when I came out, it was a mindset of not getting out. When I came out [on day four] it was about focusing mostly on balls that are on the wickets. This game is about patience so I had to be patient and wait for the bad balls and it came through,” said Sekhukhune after her marathon knock.

Luus lost her wicket early on day four when she was trapped leg before wicket by Kate Cross, who recorded match figures of six for 119. This brought Lizelle Lee to the wicket who was out for an eight-ball duck in the first innings.

Despite the match situation, Lee played positively as she struck a 51-ball 36. Sophie Ecclestone eventually grabbed her wicket as Lee played one shot too many and was excellently caught by Cross.

First-innings hero Kapp then walked out to the crease and she seemingly picked up where she left off in the middle as she scored 43 runs off 58 deliveries, lashing eight boundaries.

“[Kapp] said before the Test match that she wants to bat lower down the order because she doesn’t have a game plan in Test match cricket, so I don’t know where the 150 and the second innings [performance] came from – but if that’s not a game plan then I don’t know,” said Luus of all-rounder Kapp’s contribution with the bat.

“She’s a star in the team and she batted extremely well.”

With the rain continuing and a positive result looking unlikely, captains Luus and Knight shook hands and accepted a draw with South Africa on 181 for five.

“I’m very proud. We had nine debutants and only two experienced – I say experienced, they’ve only had one Test – playing against players that’ve been part of Test match cricket for 10 matches. I’m very proud of the girls and how they’ve gone about the four days,” said Luus.

The teams now turn their attention to the white-ball leg of the tour, with three One-Day Internationals from 11 to 18 July. DM