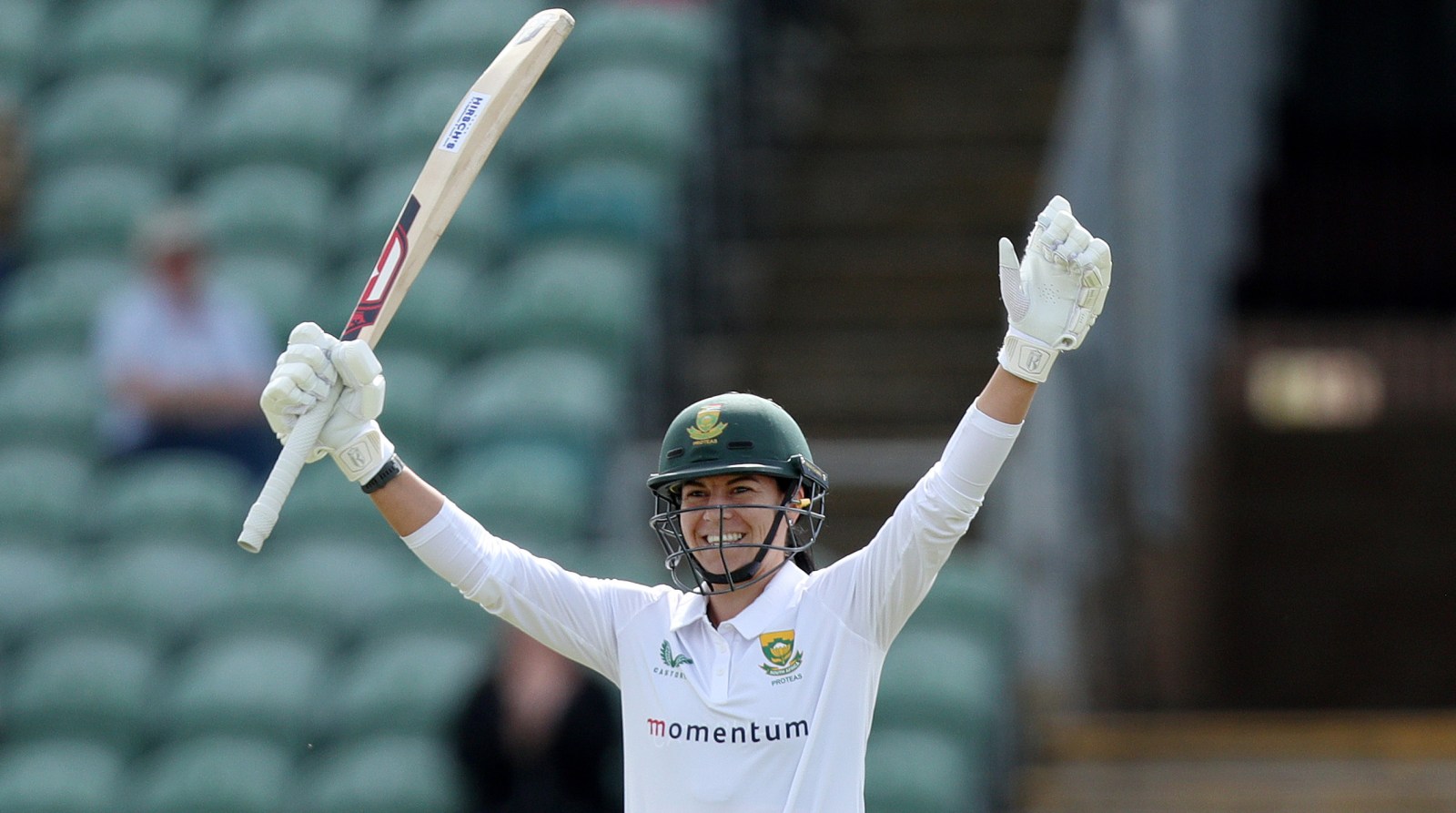 Marizanne Kapp of South Africa celebrates after reaching a century on day one of the first Test between England Women and South Africa Women at the Cooper Associates County Ground on 27 June 2022 in Taunton, England. (Photo: Ryan Hiscott / Getty Images)

Proteas allrounder Marizanne Kapp made history with a record 150 on the first day of the one-off Test against England at Taunton.

The lanky figure of Lauren Bell steams in — with the second new ball in hand — to deliver another menacing inswinger to Marizanne Kapp. The South African batter thunderously strikes the good-length delivery down the ground, showing the maker’s name. The ball is seemingly searing towards the boundary, but in a flash it is athletically plucked out of the sky by a flying Tamsin Beaumont fielding at mid-off. An incredible end to an enthralling innings.

“It was really difficult when she was looking to score and attacking, we needed something special to get her out and Tammy took that catch which was a brilliant one,” said England fast bowler Kate Cross about Kapp’s innings after the day’s play.

Kapp walked off the ground at County Ground in Taunton, having just recorded the highest individual score in women’s Test cricket for South Africa. A magnificent 150 off only 213 deliveries surpassed the previous best of 105 by Yvonne van Mentz in 1961.

Her stellar innings guided the Proteas to 284 all out at the end day one of the Test, after England asked the visitors to bat.

“I think it would be right up there, it was a special moment today. I still have to reflect on that, it’s definitely going to be one of the highlights of my cricketing career,” said Kapp after the day’s play.

The Proteas women’s team is playing their first Test match in eight years, and Kapp is one of only two players in the team who has played a Test before. The other player, with two Test caps to her name, Lizelle Lee, was trapped leg before wicket by a Bell inswinger to leave the Proteas women languishing at 45-4 after fewer than 18 overs of play on the first day’s play.

Almost five hours and plenty of excellent cover drives later, the Proteas were sitting pretty at 276-9, when Kapp was finally dismissed.

“Usually I aim for 50s, especially in the formats we play, but to come out today and score that 150, it’s pretty special for me,” said Kapp.

Jack of all trades

In the Proteas women’s last Test match against India in 2014, Kapp batted at No 3 and opened the bowling. In recent years, the 32-year-old has developed more into a bowling allrounder.

“I always enjoyed my batting. At times it’s so difficult to focus on both bowling and batting, I feel like one always takes preference,” she said.

Coming in at No 6, it was her second skill that really shone through as Kapp was particularly brutal through the offside, striking 26 boundaries, as she played cover drives on the up and cut deliveries with venom.

“I was very nervous coming into this game. In the warm-up game, with my batting, I played like I was playing a T20 game. [I’m] just happy with the outcome today,” said Kapp.

“I am usually a bit slower than the rest and I take my time. I’ve been working really hard on my white-ball game and when I played that warm-up game a few days ago I was like ‘I shouldn’t be playing Test matches’ because I was playing a T20.”

Kapp has excelled all year with the bat — particularly in the 50-over World Cup earlier this year — providing the Proteas women’s side with a handy finishing option down the order.

“I think it comes down to confidence. It took one or two innings, for me, against some of the stronger teams that just helped me cross that line. I think it should be good going forward now,” said Kapp about her ever-improving batting.

“Luckily today it came off for me and my team, if you just take it ball by ball and forget about the colour of the ball that’s coming towards you, it really helps a lot.”

She demonstrated again today that she can guide the innings with the lower order, as her partnerships with Anneke Bosch (72), Nadine de Klerk (41), Sinalo Jafta (25) and Tumi Sekukhune (49), proved more fruitful than many of the top-order partnerships.

“I think it actually helps me a lot more than it helps them because if I focus on the other batter, it seems to take the pressure off me — that’s what happened throughout the World Cup as well. When I give advice, I kind of forget the situation we are in and it helps me focus a bit more,” said Kapp.

“I was just telling them to just stay in for as long as possible because I knew the older the ball got, I could take the England bowlers on a bit more and I knew they were tired as well. Being a bowler, you know that last session was going to be tough.”

Despite the seam-friendly conditions in England and the assistance of the Dukes cricket ball, the English bowlers had no answer for Kapp.

“I thought ‘Kappie’ had an absolutely outstanding day. To score a 150 in Test match cricket is pretty special.”

South Africa posted a competitive 284 all out at stumps, the final wicket of Nonkululeko Mlaba (8), closing the first day’s play.

However, earlier, South Africa’s inexperience in the longest format of the game shone through as Andrie Steyn (8), Laura Wolvaardt (16), Lara Goodall (10) and Lizelle Lee (0) all played around the swinging ball to be bowled or trapped LBW.

“The girls were a bit nervous this morning with our start, but again that happens within cricket… If you take it ball by ball, session by session, it makes it a bit easier,” said Kapp.

Captain Suné Luus (27) and Kapp then put on a 44-run partnership to guide the Proteas to 89 for five before Kapp grabbed the innings by the scruff of its neck.

“I was nervous and they were bowling pretty well with that new-ish ball, but we just said to ourselves, if we just stay in there for as long as possible, we would get the runs and it would get easier. I’ve seen as soon as the ball got older, the outfield got a bit quicker as well. I knew if we could stay in for as long as possible, you can cash in at the backend,” said Kapp. DM