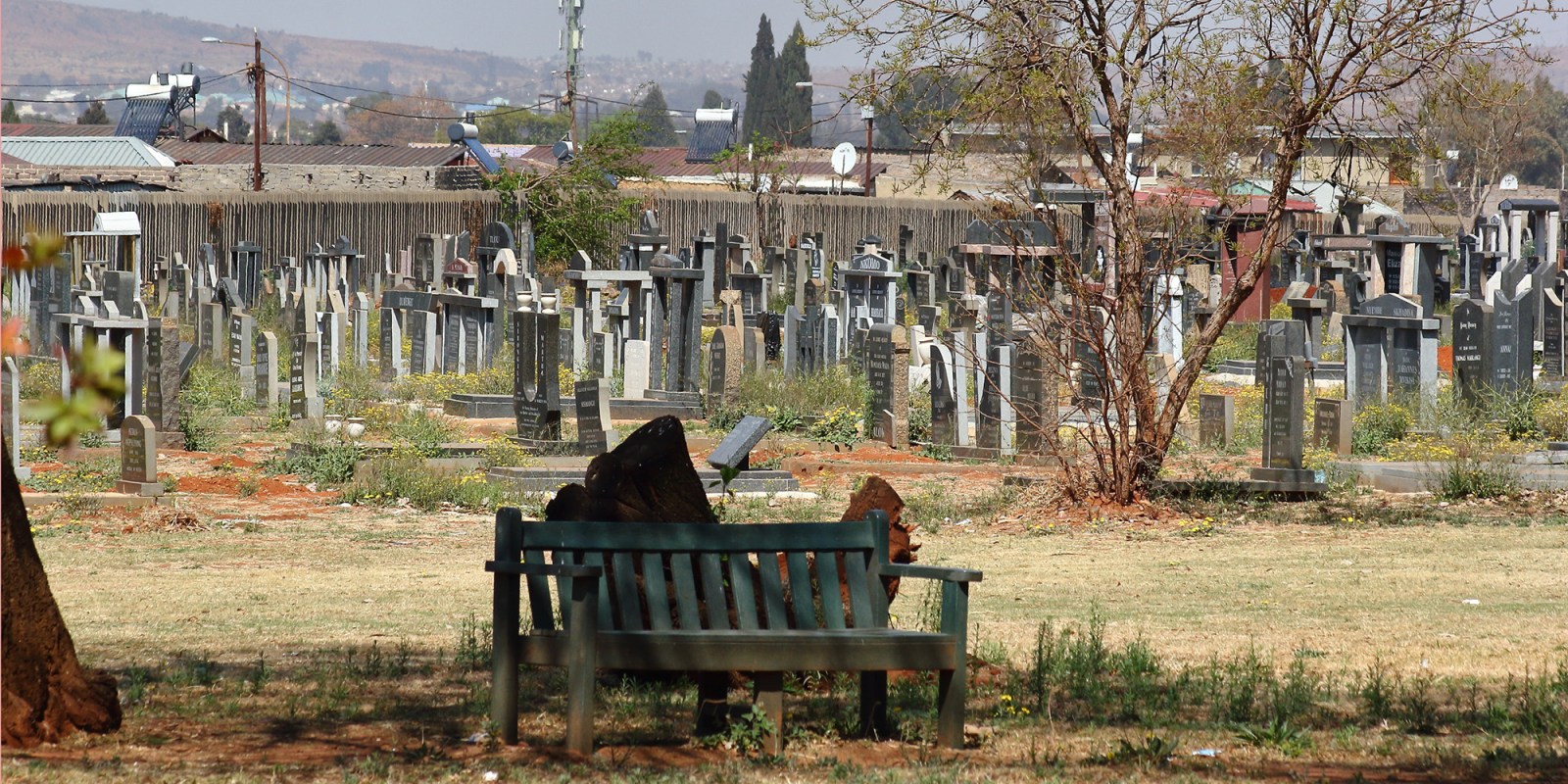 Avalon Cemetery in Soweto. The cemetery is the largest in South Africa. It was opened in 1972, during the height of apartheid, as a graveyard for black people. (Photo: Gallo Images / Fani Mahuntsi)

The Avalon Cemetery in Johannesburg is a historic landmark, the biggest cemetery in the country and final resting place for many of South Africa's Struggle stalwarts and icons, including Hector Pieterson, Helen Joseph and Charlotte Maxeke. However, petty criminals have been stealing from, and vandalising, this gravesite – and others in Johannesburg – for years.

Located in the southwestern corner of Soweto, the Avalon Cemetery spans 172 hectares and holds the graves of more than 300,000 people. It harbours part of the country’s political history and is the biggest in the country. However, these credentials have not stopped criminals.

While this writer was visiting Avalon Cemetery recently, a man broke out of a nearby thicket and ran towards the car. In his first utterance, he expressed mistrust for my colleague who he accused of being a police officer.

Apart from his declaration of being a self-confessed shoplifter, what also stood out was how swiftly he responded to our presence.

“He belongs to one of the groups, some from Eldorado Park, who steal and vandalise tombstones and tiles,” volunteer groundsman, 33-year-old Mpho Khotso from Chiawelo would later say.

“They steal whatever they can and they are aggressive to other criminal groups at the cemetery,” Khotso said.

For years now, criminals have ensured that the perimeter fence and wall surrounding Avalon Cemetery are largely destroyed. The breaches enable easy access to the cemetery from all sides. According to JCPZ spokesperson Jeffery Moloi, the fencing at the Avalon Cemetery has not been repaired since it was vandalised some years ago.

“Budgets are directed to priority areas of need,” said Moloi, who did not elaborate on what those areas of need are.

The JCPZ generates its revenue from the various burial services it provides, including exhumation and cremations, ranging from R1,320.21 to R1,710.64 and at least R540 for infants. Additional revenue is generated through services such as grave enlargements and burials in high-profile spaces.

“There is vandalism… in terms of stones being broken or stolen. The vandalism does not have a season, or period, it happens anytime,” said Moloi.

Even tiny items such as the metal tags used to label some graves have been stolen. Expensive wall or floor tiles used on  some tombstones are also removed and taken by criminals.

Tombstones are also frequently stolen, though it remains unclear whether they are re-sold or re-used. Moloi confirmed that the most common complaints from families were vandalised and stolen tombstones.

Ronald Maluleke from Pretoria has been volunteering his services, such as cleaning graves, to families for more than 20 years. He has been struggling to gain employment at the JCPZ despite his persistence and experience.

“The tombstones are sold to unscrupulous funeral home owners. They are stolen soon after installation,” Maluleke said.

Moloi said the long-term effects of vandalism of JCPZ infrastructure and tombstones were far-reaching, such as “the loss suffered by affected families and out-of-budget expenditure incurred from repairing infrastructure like fencing at the cemeteries.”

When asked if any suspects were arrested for the theft and vandalism, Moloi said: “I would not know as it would be the families who report vandalism.”

JCPZ also suffered challenges during the Covid-19 lockdown period. “Changing our operations to accommodate burials within the shortest space of time outside our normal processes was our biggest challenge.”

That’s not all. The SS Mendi Memorial, honouring the memory of the 607 men who lost their lives when the SS Mendi sank 21 February 1917 during World War 1 while bound for France, is also located at the Avalon Cemetery.

Criminals and vandals seem unfazed by the cemetery’s historic heritage.

“The attack on the cemetery amounts to trampling on the South African flag itself. It’s an insult and a slap in the face to some of those who liberated this country. Such disdain for a place deserving of veneration is an indictment on the perpetrators,” Soweto community leader Mpho Mohetloa from Orange Farm said.

“I struggled for over an hour to find it because the metal tag has also been stolen,” Mohetloa said.

TK Funerals employee Tshepo Ngake, 33,  said he and a colleague were preparing to leave Avalon after a funeral when they were attacked.

“After a burial, criminals suddenly appeared and robbed us at gunpoint. They took our phones and the lowering device,” Ngake said.

When asked who should provide security at cemeteries, Moloi said, “We do have guards at the entrances.”

During several visits by Daily Maverick, a security guard was spotted only once, leading a dog towards the gate.

During an incident in May, a family accused a funeral home owner of tampering with their loved one’s grave and littering the grave with boxes of milk. The family was adamant that the funeral parlour had come back for the casket at night. The matter was finally resolved when JCPZ facilitated an exhumation which revealed that the casket was still intact.

What is being done?

Spokesperson Moloi said that security at the burial facility was the responsibility of law enforcement.

Newly appointed Lenasia Station commander Brigadier Theledi Gopane could not be reached for comment, despite numerous attempts to try and establish how many robbery and theft cases have been reported to the station and what the consequences were for the suspects.

“Nothing was done when my parents’ stone was vandalised and parts of it stolen. Nothing is being done now,” said Khanyi Ledima, while visiting the cemetery.

“It’s not only a Johannesburg problem, it cuts across the country,” said Moloi.

The establishment of an informal settlement called Nana’s Farm worsened the state of the cemetery. It’s situated a few hundred metres from the Avalon cemetery along the N12 freeway.

The fencing breach around the cemetery has made it a thoroughfare to the nearby Protea Gardens mall where most of Nana’s residents do their shopping.

Some old graves on the site of Nana’s Farm have made way for shacks while materials from the graves such as stone have been pilfered to build some of the shacks. In most African cultures, this would annoy even the kindest of ancestors.

In July 2020, after obtaining a court order, the city of Johannesburg demolished about 130 illegal shacks in the same area.

Since then, hundreds of shacks have mushroomed.

“This matter is the responsibility of policing as City Parks and Zoo are not by-law enforcers,” Moloi said.

Moloi also denied that the informal settlement was sitting on old graves.

On 16 June, a number of families gathered around the graves of their loved ones who died during the 1976 Soweto uprising.

Said Steven Hlatshwayo, who lives in Chiawelo and who is a relative of one of the deceased: “The government must regulate or close all the scrap yards and enforce the by-laws to curtail much of the thieving and vandalism. The moral sense among our people is completely eroded. Nothing surprises me anymore. Our relatives are not resting in peace,” DM