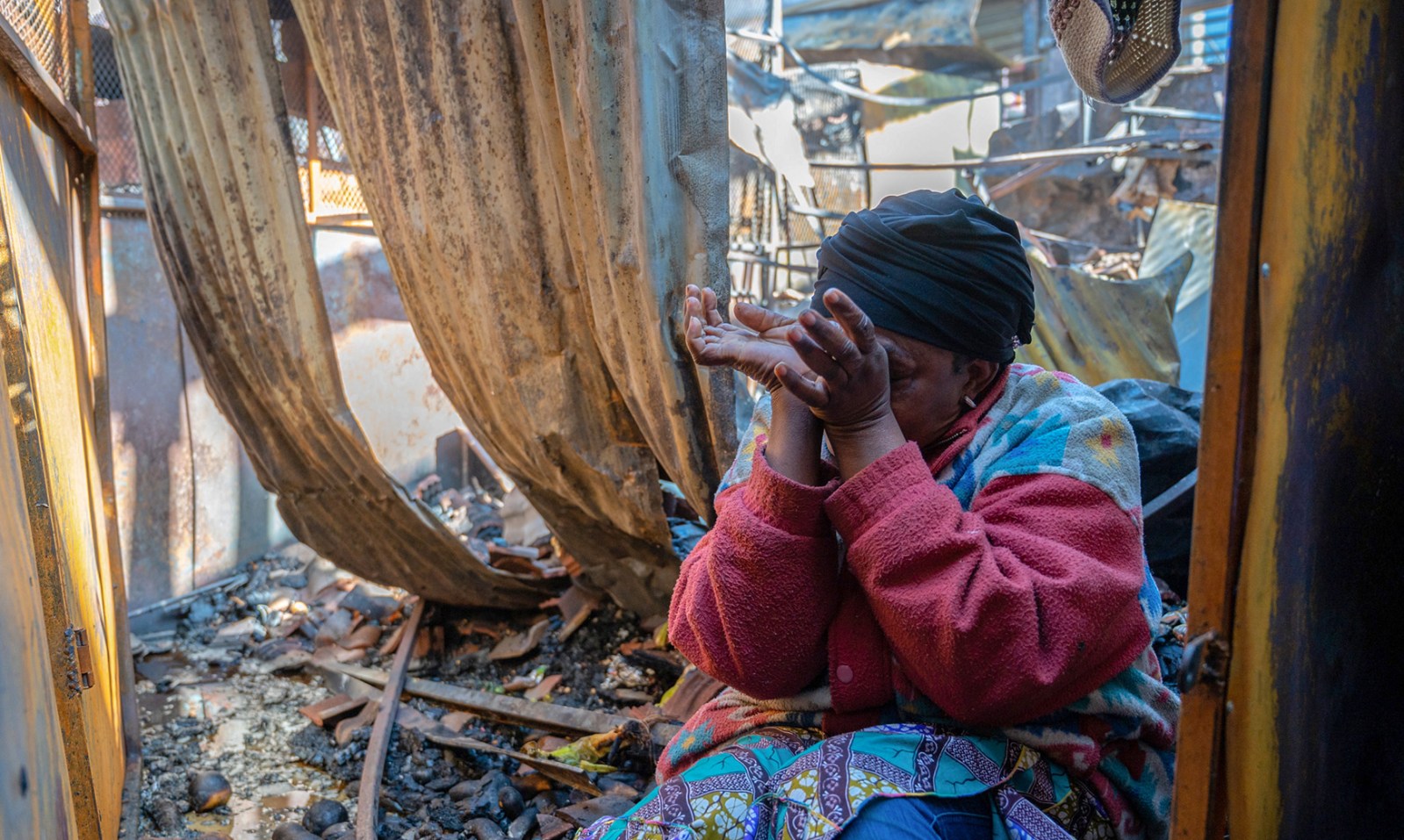 A tearful Emilie Luvadiokueno from Kinshasa, Republic of Congo (DRC) sits in the remains of her store at the Yeoville market in Johannesburg. The predominently Congolese shops were destroyed by an alleged arson attack. (Photo: Chris Collingridge)

There was what appears to be an arson attack on the Yeoville Market on Monday night. Witnesses said they saw a group of men carrying petrol bombs shortly before flames were seen coming from the market.

The witnesses were fearing for their lives on Tuesday and did not want to speak directly to journalists, but they spoke to people from the community.

Some from the community believe that this was the work of Operation Dudula, the anti-foreigner vigilante group that previously threatened to burn the market down and drive non-South African traders out.

Not long after witnesses claim to have seen the men, Aimee Manzumbu was woken by a phone call at 1.17am on Tuesday.

“Come, why are you not here? You must come,” the voice said. By the time she arrived at the market, the fire had spread.

It was only later that morning when Manzumbu ducked under the yellow police cordon tape that she saw what was left of her shop. On a blackened table and strewn across the floor were plantains, piles of dried fish, ginger and beans – produce from Manzumbu’s home country, the Democratic Republic of Congo. All of it was burnt.

Her shop is her only source of income, Manzumbu told Daily Maverick.

Other shop owners were also picking through what was salvageable late Tuesday morning. With month-end drawing near, thoughts had already turned to how they were going to pay suppliers, school fees and rent.

“For many, this is a hand-to-mouth existence,” said Congolese national Fabian Kalambo.

Over the last couple of weeks, Operation Dudula had set its sights on the Yeoville Market, also known as the BA market. They wanted the market handed over to South African traders.

Along with threats of evicting foreign traders, there was talk of burning the market down. The market had to be closed on 11 and 12 June after Operation Dudula said they would come and remove foreigners from their stalls.

Members of Operation Dudula had arrived but stood on the other side of Rockey Street with placards.

“They told me, I must go back to my country,” said Manzumbu, adding this was the first time she had experienced xenophobia in 22 years of living in South Africa.

On Monday, the traders who lost goods in the fire added their names and contact details to a list.

“We have asked everyone to record how much they have lost,” said Kalambo.

Jean Bwasa, chairperson of The Right to Live Africa, said they needed to lodge a complaint against the South African government. Perhaps they would have to do it through the Human Rights Commission, he said.

“This is just awful and heartbreaking… it is black-on-black violence,” he said.

While some witnesses claim the blaze was due to arson, Zandile Dubula, spokesperson for Operation Dudula, said she’d heard the fire was caused by a faulty heater.

“If they have proof (of arson), they need to bring it forward. We at Operation Dudula do not promote criminality. So if it’s one of our members, then we will let the law take its course,” said Dubula.

“Police received a phone call from an anonymous source saying that Yeoville Market is on fire. On arrival at the market, the police found firefighters busy extinguishing about five stalls that were burning,” said Gauteng police spokesperson Colonel Mavela Masondo.

“The cause of the fire cannot be confirmed at this stage.”

In a statement, the Africa Diaspora Forum, a foreign national advocacy group, said: “As we celebrated World Refugee Day on Monday, it was with great shock and concern that we received news of the fires that destroyed Yeoville Market…

“As the African Diaspora Forum, we call for urgent dialogue between all parties and we urge all parties to commit to a process which leads to de-escalation of violence and harmony between migrants and local communities.”

Emilie Luvadiokueno had a stall at the market when it opened over 20 years ago. She was a street trader before then.

On Tuesday she held a blackened plantain in her hands. She said the man who had sold her much of the wares in her now gutted shop would be back looking for his money. Now she had nothing.

“I just don’t know what I am going to do,” she said, breaking down in tears. DM