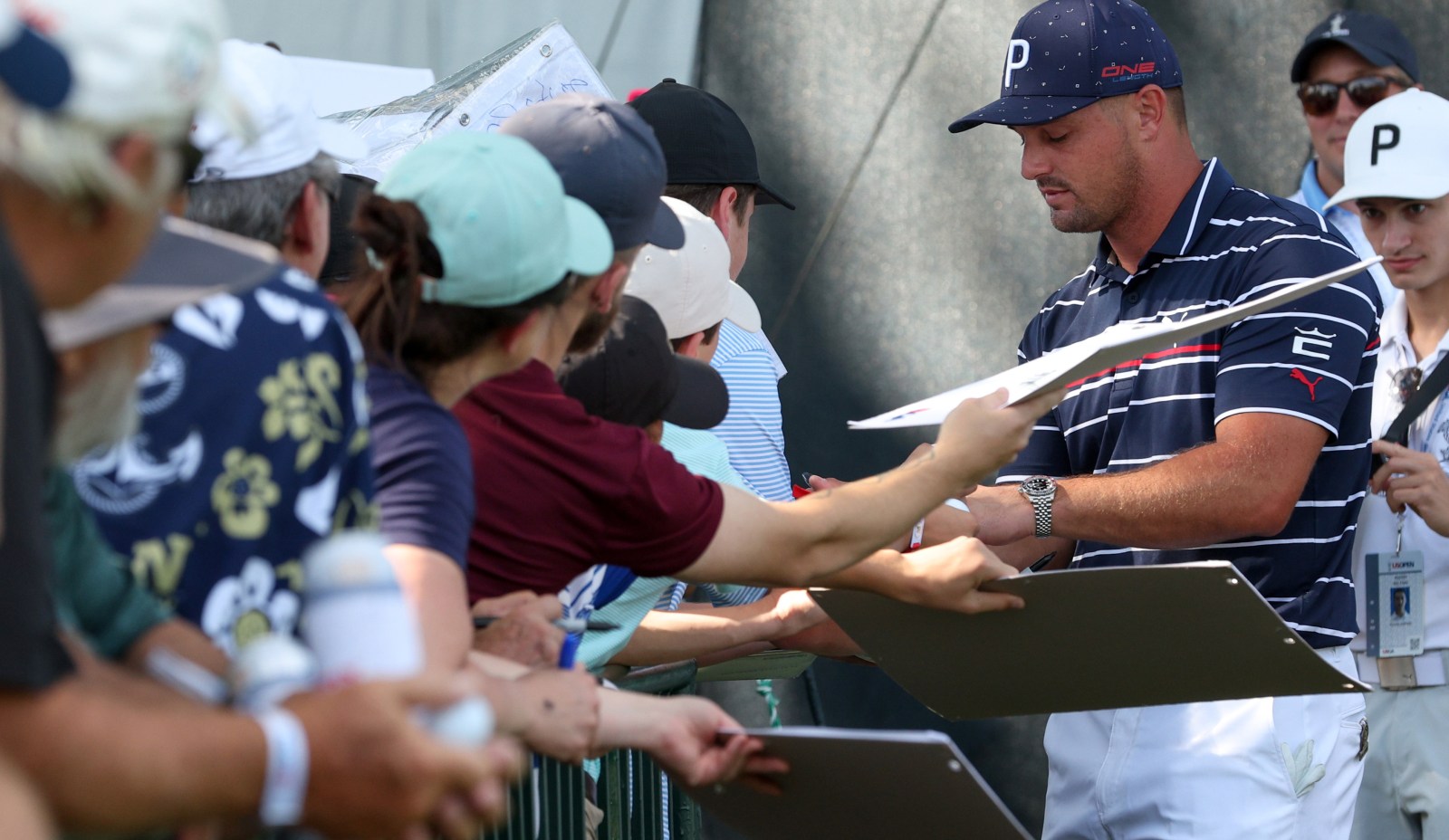 Bryson DeChambeau of the United States signs autographs for fans during a practice round before the 2022 US Open at The Country Club on 13 June 2022 in Brookline, Massachusetts. (Photo: Rob Carr / Getty Images)

The Saudi Arabia-backed LIV Golf is luring big names in the sport away from the US’s PGA Tour, which has been the home of golf’s best players for more than 50 years.

In any other year, as the season’s third major, the US Open would be not only the golf story of the week, but also of the month of June. It has been overshadowed by the raid on players by the Saudi Arabia-backed upstart LIV Golf, which is driving the sport towards all-out civil war.

LIV Golf, underwritten by the $500-billion Saudi Public Investment Fund, and headed by former world number one Greg Norman, has established a rival tour of sorts.

At this stage it has committed to eight tournaments in 2022 — the first of which took place from 9 to 11 June at St Albans near London and was won by South Africa’s Charl Schwartzel. But there is no telling how big, or how far, the Saudi-backed LIV Series is willing to go.

The funds it has at its disposal are almost limitless and there are clearly enough professional players willing to accept LIV’s money, however much blood it’s soaked in. Saudi Arabia is one of the world’s most brutal regimes and this is a clear attempt at using sport to polish its global image.

Where is the moral line?

The moral outrage is justified, but it’s a brittle game to play because both the PGA Tour and the DP World Tour have long accepted money from dubious sources.

Tournaments are played in China and Saudi Arabia, and big petroleum companies, greedy banks and apparel companies that run sweatshops in Asia are regularly and prominently on display in professional golf.

That Saudi Arabia is a bad, bad place with a widely and extensively documented history of human rights abuses is not in question. But so are some of the countries the golf establishment is already in bed with.

Where the moral line begins and where it ends is opaque.

And though the PGA and DP Tours are happy for media outrage about Saudi Arabia’s human rights record to run as justification for LIV’s abolition, the reality is that it’s not really a strong enough disincentive.

After LIV staged the coup of signing Dustin Johnson, consistently in the top three over the past five years, it also lured Bryson DeChambeau and Patrick Reed. Along with the likes of South Africa’s Louis Oosthuizen and others, LIV is quickly attracting some quality players.

The $25-million purse, a 48-man field with a shotgun start, no halfway cut, with the winner banking $4-million in the individual event and even more for a team component, is just part of the story. The massive signing-on fees for the top players is another.

Johnson received $125-million to join LIV Golf, Phil Mickelson reportedly got more and world No 2 Jon Rahm threw out a figure of $400-million in a media conference.

And that scares the established tours because, for more than 50 years, the PGA Tour has been the home of golf’s best players. The PGA’s response has been to ban the first 17 defectors, with threats to do the same to future LIV recruits.

“I consider the PGA Tour has done an amazing job, giving us the best platform for us to perform,” defending US Open champion Rahm said on the eve of the 2022 event.

“I do see the appeal that other people see [of] the LIV Golf. I do see some of the … arguments they can make towards why they prefer it,” he said.

“To be honest, part of the format is not really appealing to me. Shotgun [start], three days and no cut, to me is not a golf tournament…

“Yeah, money is great, but when Kelley [his wife] and I started talking about it and we’re, like, will our lifestyle change if I got $400-million? No, it will not change one bit.

“I could retire right now with what I’ve made and live a very happy life and not play golf again. So, I’ve never really played the game of golf for monetary reasons. I play for the love of the game and I want to play against the best in the world.”

The battle for control

DeChambeau and Reed, the 2020 US Open and 2018 Masters champions respectively, signed for LIV after the PGA bans were handed out.

The threat is serious, but against the hundreds of millions LIV is offering, it’s not enough. And, legally, the PGA’s stance might yet be tested in court because players are independent contractors, even if they are members of the PGA Tour.

Golf is entering an era of battle for player control because, without them, there are no golf tours and tournaments. If LIV, for argument’s sake, signs 30 of the world’s top 50 players, will the PGA still impose the ban? Could it afford to?

At this stage, anyway, LIV is not setting up a complete rival tour over 40 weeks, so there is time for the PGA to consider its options. The one factor that might deter future LIV recruits is if the majors ban defectors.

Currently the four majors — the Masters, PGA Championship, US Open and Open Championship — have not presented a unified position. The US Open falls under the United States Golf Association and not the PGA Tour. It took the decision not to ban the LIV defectors who qualified for the US Open at Brookline from 16 to 19 June.

The Open Championship has not said it will ban LIV Golf players from the 150th Championship at St Andrews next month. The Masters has also not offered an opinion.

If the majors don’t ban LIV players, the PGA Tour’s stance is weakened. It might have to put away the stick and take a carrot approach by perhaps allowing LIV some room in the calendar, and even finding a way to work together.

It’s an outrageous notion in the current climate, but it’s obvious many players are plain greedy. The hundreds of millions already on offer on the PGA Tour are not enough when LIV Golf has billions. The players are going to be the ultimate winners in this battle. DM