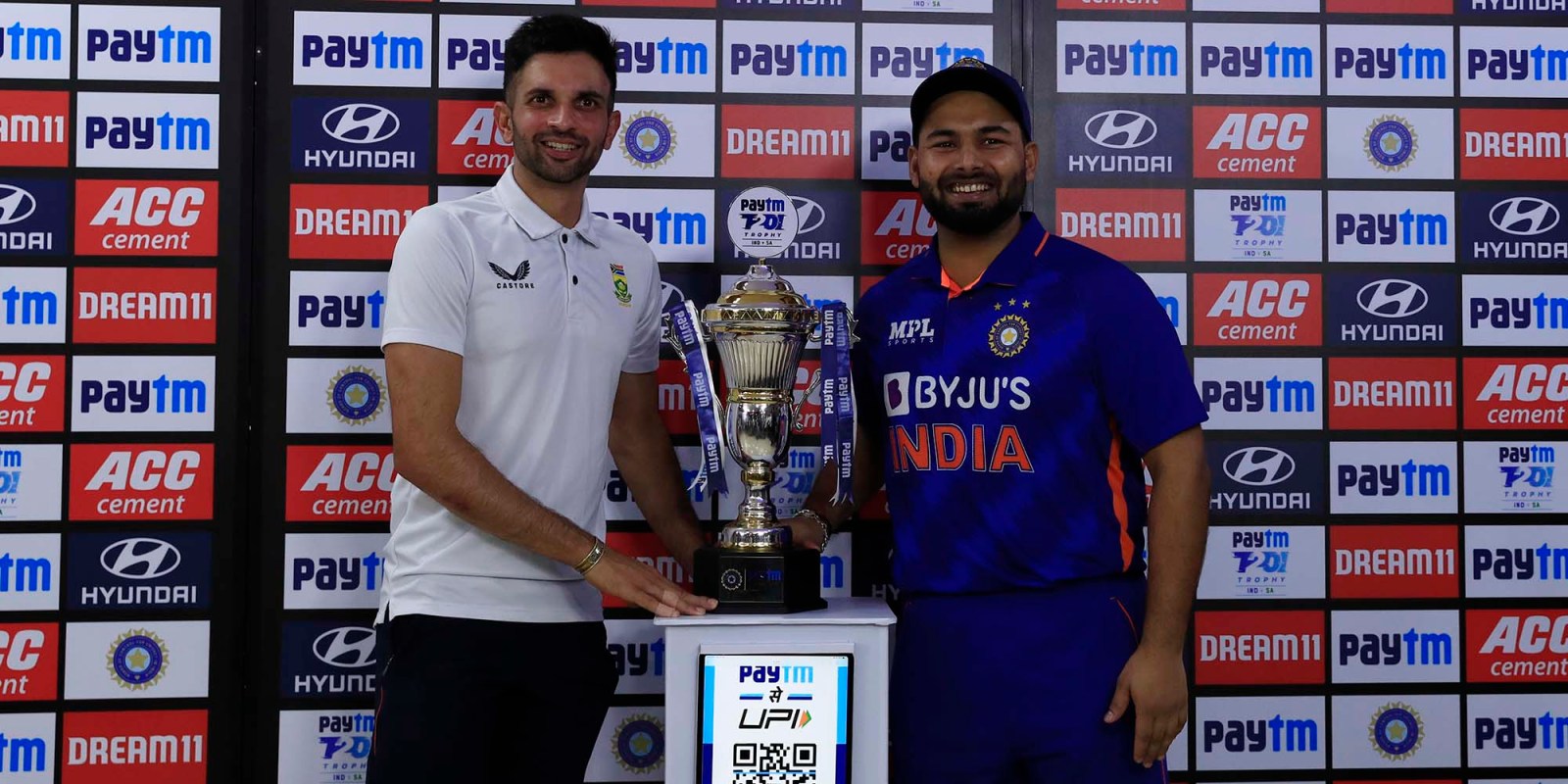 Captains Keshav Maharaj of South Africa and Rishabh Pant of India share the series trophy after the fifth and deciding match was rained out at M Chinnaswamy Stadium on 19 June 2022 in Bangalore. (Photo: Pankaj Nangia / Gallo Images / Getty Images)

India and South Africa shared the honours in their T20 International series after the deciding fifth and final match in Bengaluru was abandoned due to rain.

With the five-match T20I series between India and South Africa interestingly poised at two-all heading into the deciding tie, a cracker of a contest was anticipated. However, heavy rains washed away all hopes of either side taking the reins in the tie.

Monsoon clouds had been hanging over the Indian city of Bengaluru in the days leading up to the decisive clash. In spite of this, there remained hope that some cricket would be played on Sunday evening to cap off an enthralling series. Alas.

The final game was initially reduced to 19 overs a side as the predicted rain descended and delayed proceedings. The downpour eventually subsided long enough for the Indians to step in to bat, after losing the toss against stand-in South African skipper Keshav Maharaj.

The spinner was deputising for the injured Temba Bavuma — who missed the rained-out clash alongside Tabraiz Shamsi and Marco Jansen. The trio was replaced by Tristan Stubbs, Reeza Hendricks and Kagiso Rabada.

India enjoyed an explosive start to their batting effort when Ishan Kishan hit Maharaj for two consecutive sixes in the opening over, which cost Mark Boucher’s side 16 runs.

Proteas pacer Lungi Ngidi then dismissed the hosts’ opening batters to reduce India to 28 for two. But it started pouring again with only three overs bowled — never relenting as play was eventually called off and the spoils shared.

The South Africans grabbed the five-match contest by the scruff of its neck at the outset. The team displayed unrivalled intent as they recorded their highest successful run chase in the shortest format of international cricket after comfortably winning the opening tie.

In the process, they also snapped India’s 12-match winning streak. When they went 2-0 up in the series thanks to Heinrich Klaasen’s cutthroat batting in Cuttack, it seemed they might ride the wave for at least one more match. Victory in the third T20 would’ve handed the Proteas an insurmountable 3-0 lead.

As it was, the new-look Indian side boasting a deep well of quality 20-over specialists forged in the Indian Premier League (IPL) and led by wicketkeeper Rishabh Pant for the first time, bounced back.

A 48-run victory in the third clash saw the Proteas’ lead halved. The Indians levelled the series with a comprehensive 82-run win in the fourth match and were carrying the momentum for a possible series win before it was all swept away by the torrential rain.

Boucher, whose side is sharpening itself up for the T20 World Cup set to take place in Australia from 16 October, bemoaned the loss of the versatile Aiden Markram — who was coming off a strong IPL campaign with the Sunrisers Hyderabad.

The belligerent batter, whose T20 average stands at 39.2, tested positive for Covid-19 before the series kicked off — ruling him out. His loss would just be one of a handful of health-related setbacks for Boucher’s men.

Throughout the series, the influential Quinton de Kock missed out on two games due to injury, while star bowler Kagiso Rabada was absent for the same reason in the fourth match. Captain Bavuma was ruled out of the decider by a shoulder injury.

“There are plenty of lessons we can take [from this result]. It was tough losing Aiden Markram before we even started the first game. It put us under pressure. We wanted to play six batters, with Aiden also being our sixth bowling option. We couldn’t do that,” said Boucher in his post-series press conference.

“You come to India off the back of an IPL season. A lot of their players are in good form. They’ve played a lot of cricket in these conditions. I’ll take two-all. We didn’t play our best cricket… But yeah, a lot of lessons in a World Cup year where we can still see if we can plug a few gaps going to Australia,” the 45-year-old added.

“Up front, with our batting [we battled]. We struggled in quite a few of the games to get going. Especially in the third game. We didn’t go in and bat with the intent we needed. Our bowling at certain stages was very good. And on other occasions, we looked a little bit rusty.”

On to the next one

The Proteas will have another chance to blossom before the World Cup. They play in England next, in a month. There they face the English side in three T20s which will be preceded by the same number of One Day International matches.

By then, Boucher will hope that his side will have oiled out the rust he speaks of. More importantly, he will hope they can apply the lessons learnt in India — where they were handed a taste of victory before it was wrenched from them by their determined hosts. DM