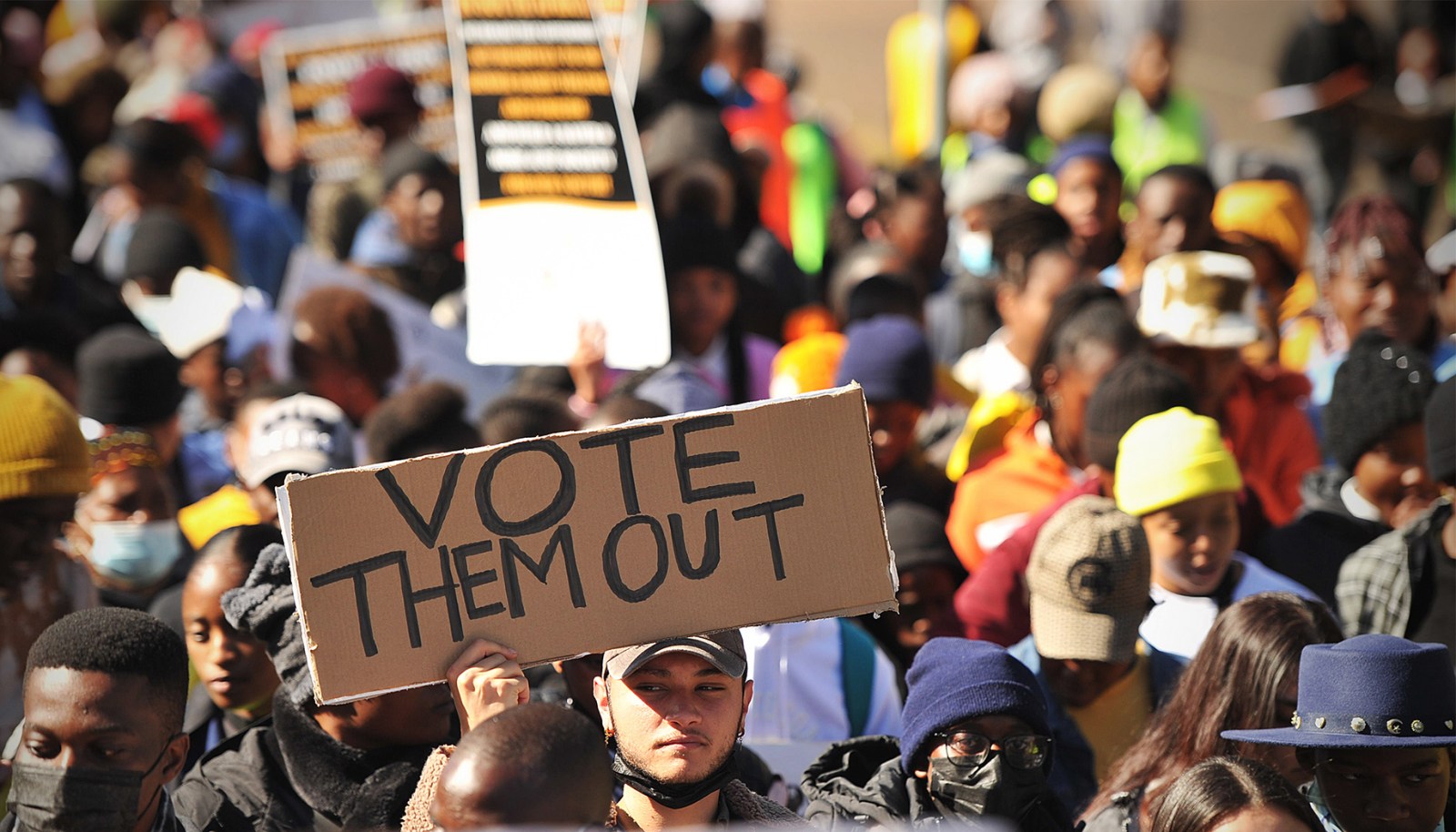 Young people ranging from school-age learners to students and young adults gathered at the Union Buildings in Pretoria on Youth Day yesterday to demand action from the government on issues such as unemployment, climate injustice, unequal education and gender-based violence. (Photo: Denvor De Wee)

At a Youth Day Parade on Thursday, more than 1,000 young people from a range of organisations marched to the Union Buildings in Pretoria in pursuit of systemic change. In a memorandum handed over to the Presidency, they demanded action on issues such as unemployment, unequal education and gender-based violence.

Youth Day dawned with clear skies and icy temperatures in Pretoria. Despite the early morning chill, a crowd of young people – ranging from school-age learners to students and young adults – began arriving at the Loftus Versfeld Stadium from 9am.

They were gathering in preparation for the Youth Day Parade for Justice and Change, an event organised by the Ahmed Kathrada Foundation’s youth activism programme and its partners. Formally endorsed by 96 organisations, including SECTION27, the Zero Dropout Campaign and Corruption Watch, the event was an opportunity for young people from a range of backgrounds to demand action on issues such as unemployment, climate injustice, unequal education and gender-based violence.

When Maverick Citizen arrived at the stadium, the first of the parade’s supporters had already begun handing out placards and chanting protest songs. By 11 am, their numbers had swelled to more than 1,000.

Delani Majola, the communications officer at the Ahmed Kathrada Foundation, described the event as a positive sign that young people are not “stagnant”.

“Young people want to see action,” Majola said. “And young people want to not only be part of it but also be at the forefront of it. Seeing the wide range of organisations who are here… some of their posters just declaring exactly what they stand for… I think it’s issues that a lot of us can relate to.”

A welcome sight at the parade was the number of children taking part, said Busisiwe Zasekhaya, a project coordinator at Right2Protest.

“It’s heartwarming to see the youth show up. We’ve got little kids here, school kids showing up in the uniform. So, it really is great to see young kids taking part,” she said.

At around 11.30am, the crowd began the 3km march to the Union Buildings, to hand over a memorandum of demands to the Presidency. Among the demands laid out in the document were that the government:

Young activists from participating organisations assisted with drafting the memorandum, providing their perspectives on how best to bring about change.

“As a broad coalition of young people who stand to inherit the society that you preside over, we have come forward to assert ourselves as legitimate stakeholders in the governance and development of South Africa,” stated the memorandum.

“We are all people who believe in and desire a prosperous future for all persons within the borders of South Africa and we have come together on Youth Day 2022, holding the memory of 1976 closely, to demand that our voices be heard.”

That the parade incorporated different causes and organisations was significant as there is power in unity, said Dorcas Bitema, one of the attendees.

“The fact that we are all coming together from all different places, all different cities… it makes us very strong, it makes our voice much louder,” said Bitema.

Natalie Kapsosideris, a Tuks for Climate Justice committee member, said that while she came from a climate justice organisation, joining the parade was about the intersectionality of causes.

“We’re all fighting for the same thing and we all have the same power. And I think it’s important that we can recognise that if we act together and we tackle these systems of oppression together, we can really achieve the equitable future that we all strive for,” she said.

The parade showed the willingness of young people to be in charge of their own futures, said Muhammed Cassim, the founder and chairperson of Project Potential South Africa. He added that young people need to be on more decision-making bodies.

“I would like them to be positioned in… bodies that allow for their perspectives to be heard [and] their ideologies to be understood,” he said.

At the Union Buildings

The culmination of the march at the Union Buildings involved speeches and performances from a number of participants. The Thembelihle Youth Club danced for the crowd, while Sumaiyah Ally Kotty and Mariam Bawa of Studio Sketch set up an exhibition featuring pieces by young artists.

Addressing the gathered marchers, Motheo Brodie of SECTION27 said, “Today is a powerful show of solidarity; today shows what the potential is for us as youth to organise.

“As we the youth grapple with the issues that face us, and as we come up with solutions that we’re presenting today in the memorandum, we need the older generation and those that occupy power to reflect on this question: Are they leaving a better world to us than that which they found?”

Among the government officials present to receive the memorandum from the parade’s representatives were Dumo Diko of the Government Communication and Information System; Emmanuel Kganakga of the Department of Women, Youth and Persons with Disabilities (DWYPD); Bernice Hlagala of the DWYPD; Mogotladi Mogano, representing the Presidency; and Mzwakhe Nkambule of the Department of Planning, Monitoring and Evaluation.

Majola expressed the hope that those in power would listen to the voices of the young people reflected in the memorandum.

“Young people want a place in this country and the world, and they want a future,” he said. “We’re hoping that this memorandum finds a place… that government is able to work together with young people – with business, with civil society – to address these issues that young people are faced with.” DM/MC