‘Youth are starved of opportunities’, say experts ahead of Youth Day 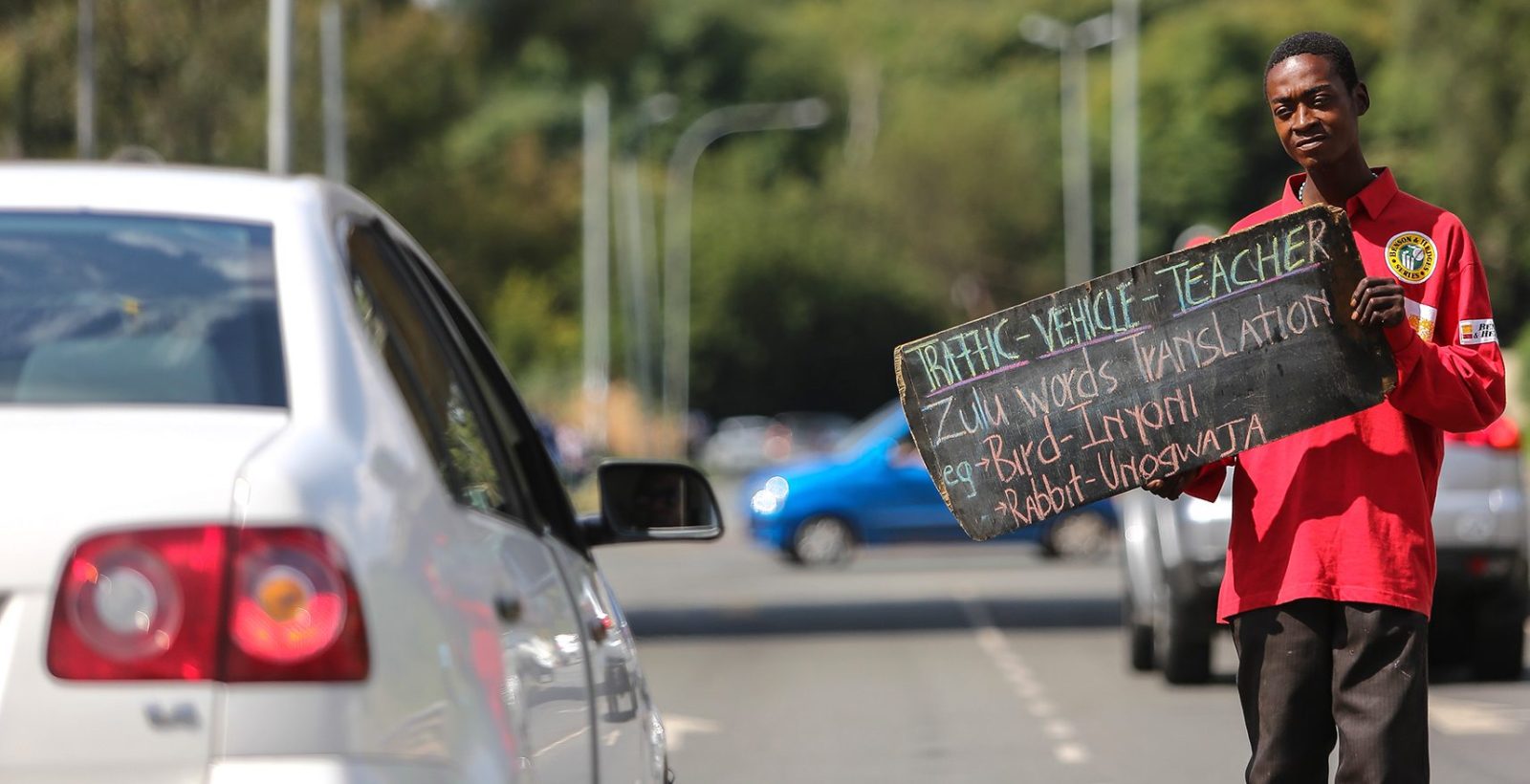 Moses Velaphi carries a billboard at a traffic intersection on January 20, 2015 in Johannesburg, South Africa. The 25-year-old from Soweto decided to give Zulu lessons to motorists at Empire Road in exchange for money or food. (Photo by Gallo Images / The Times / Moeletsi Mabe)

Young experts say a collaboration between government, institutions of higher learning and consultations with youth is the best approach to curb youth unemployment in South Africa. Young activists, meanwhile, are demanding that government prioritise the creation of green and sustainable jobs in a memorandum that is being handed over as part of the Youth Day Parade in Pretoria on Thursday.

The South African government has promised millions of jobs in the past and has failed to achieve the targets set for itself over the last two decades. As a result, unemployment and youth unemployment in South Africa has long been proclaimed a national crisis, with stats placing the country at the top of a global list of 82 last year.

But what prevails on the ground is that more and more youth are unemployed, whether educated or not.

Prof Philani Moyo, director of the Fort Hare Institute for Social & Economic Research has blamed higher education and training as the driver for youth unemployment.

“The current system of higher and tertiary education in South Africa is one of the major drivers of unemployment, poverty and deprivation among the youth. This is precisely so because the current model of higher education is focused more on theoretical teaching and simple community service that does not speak to the needs of the youth.

“Consequently, the majority of the graduates have mastered the theory and less practical work, which makes them unemployed and unemployable.”

Philah Ngidi, 21, a diploma graduate in translation and interpretation from the Durban University of Technology, is unemployed. For her, unemployment is spurred by a slowly growing economy intertwined with factors such as skills and experience in demand in the labour force.

“The economy is failing to grow and more and more young people find themselves on the outside looking in, as education falters and jobs disappear.

“Obtaining a job is now more than just about academic qualifications; there is a growing demand for experience, which most youth at most times don’t have while job hunting, and hope to build on when given a chance.”

Ngidi has been unemployed for a year. She says securing a job in her field is hard, so she often volunteers her services to build her experience and stand a better chance of getting a job.

While unemployment breeds frustration and hopelessness, and accelerates mental health problems as reported in Daily Maverick, it also reproduces all other inequalities and proliferates all forms of hardship.

Research has it that, as a result of unemployment, many youths in South Africa are disengaged from the socioeconomic development of the country as well as its politics. This is problematic because it puts South Africa at risk of a lost generation.

On Wednesday, the Eastern Cape Socio-economic Consultative Council (ECSECC), an institution that provides strategic advice to decision-makers to make choices and decisions that solve problems today and catalyse social change for a desired future, hosted a webinar to unpack South Africa’s alarming rates of youth disengagement as large masses of frustrated young people find themselves socially and economically adrift.

Ndzwana Makaula, a researcher, analyst and economist based in the Eastern Cape, said youth policies are the future.

“As it is, there are insufficient policies that are prioritising the future state of youth. Tackling youth unemployment and social exclusion requires bold strategies and decisive action and making sure mainstreaming of youth is on par. Otherwise, we will be experiencing yet another cohort of young people who are marginalised and continuously being marginalised in the country,” warned Makaula.

What is being done to reduce youth unemployment?

In the recent State of the Nation Address, President Cyril Ramaphosa acknowledged the dismal unemployment figures. Stating the obvious, he said:

“If there is one thing we all agree on, it is that the present situation – of deep poverty, unemployment and inequality – is unacceptable and unsustainable… Last year, our unemployment rate reached its highest recorded level. Unemployment has been caused by low growth, which has, in turn, resulted from a long-term decline in investment.”

Ramaphosa also said the government does not create jobs, but that the creation of employment is the function of the private sector, and specifically the small and medium businesses driven by entrepreneurs.

This statement by the president was a drastic shift away from previous Sonas and government policy.

Also, the Youth Employment Service (YES), a social initiative that focuses on youth employability and employment in South Africa, continues to light the fire of hope in South African youth through skills development.

Criticising the NYDA, Makaula said, “NYDA acts like they are a custodian of youth development in the country, and they are all over and do not master a thing, which reduces what could potentially be their impact.”

As the country moves to celebrate Youth Day and Youth Month under the theme: “The Year of Charlotte Mannya Maxeke: Growing youth employment for an inclusive and transformed society”, the focus should be on various youth development and empowerment initiatives to support young people and alleviate youth unemployment.

Zaki Mamdoo, Education and Training Officer at the Youth Activism Programme at the Ahmed Kathrada Foundation, said going forward, the call is for government to provide sustainable, meaningful job opportunities as well as safe environments for learning and development.

For Youth Day, the Ahmed Kathrada Foundation has invited young people to join the Youth Day Parade for Justice and Change at the Loftus Versfeld Stadium in Tshwane, before moving through the streets to the seat of power at the Union Buildings.

This event seeks to embrace and showcase innovative and creative forms of activism. The nature of the parade is to advance fairness, dignity, accountability, ethical governance, sustainable and equitable development, and meaningful change toward youth challenges.

In a memorandum that the young participants in the parade are submitting to government officials, they are demanding that the state combat youth unemployment. This should involve the development and implementation of policies to create “green and sustainable jobs”, according to the memorandum.

“The nature, activities, and type of these green jobs must be deliberated and decided on through a period of extensive consultation with communities, youth, and other stakeholders as part of the just transition framework,” it states.

“When we talk about sustainable and meaningful job opportunities we are implying many different things. On the one hand, we are saying that these jobs need to be sustainable in that they must be long-term or permanent and that they must provide young people with an opportunity to grow and develop on their career paths. So they can’t just be once-off or short-term forms of employment that do very little to change the lived circumstances of young people,” said Mamdoo.

“The reality is that the youth are completely starved of opportunities and do not have a fair chance at securing employment. Not only are there simply not enough jobs available for our youth to access, but unemployment also works alongside many other social issues.”

For Mamdoo, very little is being done to meaningfully address the issue.

“We need an intersectional approach that prioritises bettering access to quality education from nursery through to a tertiary level; we need to reduce the costs of job seeking and support young people who are seeking out opportunities; we also need to provide greater support to young people who are unable to study due to circumstances that require them to provide, among other things.

“Importantly, we need the government to immediately implement a Universal Basic Income Guarantee of R1,500 that serves to recognise forms of work that are not remunerated and that allows young people to invest in themselves.” MC/DM

Michelle Banda is a junior journalist at Daily Maverick who graduated with a Bachelor of Journalism and Media Studies from Rhodes University in 2021.