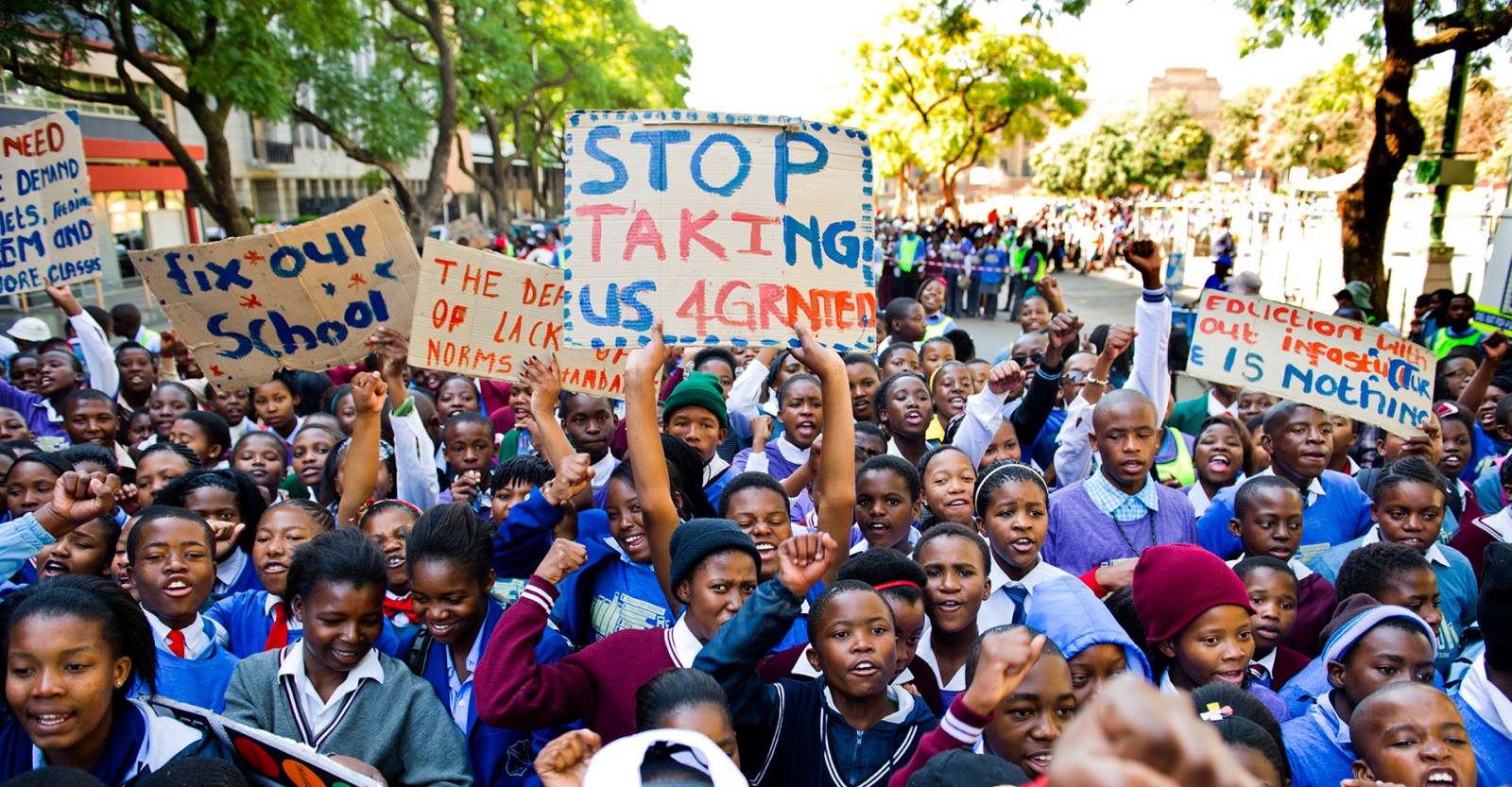 As the country remembers the events of the 1976 Soweto demonstrations, South African youth still raise questions over unfulfilled promises of access to quality education.

On paper, the education sector in South Africa appears to flourish.

There are more equitable education policies and legislation; basic education is the second-largest funded sector; once white-only schools have opened up for all races; court-mandated feeding schemes; and the introduction of free basic education, “as imperfect as it is”,  said Katherine Sutherland, Equal Education researcher, and Kgomotso Kgasi, the organisation’s Head of Organising in Gauteng.

Such equitable policies, legislation and budgeting do not always translate into reality, according to Sutherland, who worked on the compilation of the Ahmed Kathrada Foundation’s Youth Parade memorandum.

“Over and above rampant school overcrowding, a lack of safe and proper public school infrastructure, little psycho-social support, unsafe schooling environments, and extremely low rates of literacy, there are a few issues that have persisted in the 28 years of democracy,” Sutherland and Kgasi said.

Sutherland and Kgasi are a part of a group of young people and civil organisations who plan to walk to the Union Buildings in Pretoria to hand over the memorandum on Youth Day 2022, holding close the memory of 1976.

In the tertiary education sector, the government is asked in the memorandum to realise the political will to effect several “radical changes” to policy for free and quality education.

Radical changes include the immediate cancellation of all student debt. The memorandum identifies that taxation should be one of the funders at institutions of higher learning and rejects assertions that free university and college education is unrealistic.

“The demands outlined in the Youth Day Parade memorandum are urgent and we expect government to treat them as such,” stated Sutherland and Kgasi.

Involved organisations will track government’s progress on a monthly basis, they said.

According to Elijah Mhlanga, spokesperson for the Department of Basic Education (DBE), more than 80% of learners in the system go to no-fee schools, and the department has made “great strides” to access basic education.

The basic education system has over 13.5 million learners located in schools across the nine provinces and more than 400,000 teachers.

According to Mhlanga, most schools are safe for learners in terms of environment and violence, as these cases do not emanate from the school grounds but from society itself. “That means the issue of safety must be the responsibility of the community itself which should protect its children,” he said.

Mhlanga assured that provinces are addressing infrastructure backlogs that do exist, with “thousands” of projects underway.

“At any given time provinces are handing over new schools to communities,” said Mhlanga. “It must also be noted that vandalism and destruction of schools continues unabated with some set on fire while others are broken into and equipment stolen.”

Mhlanga added that more than 290,000 general and teacher assistants have been placed in schools to reduce the workload of teachers. “The Department continues to listen and address challenges that arise,” said Mhlanga.

Employment, dignity, democracy and environmental sustainability are amongst the list of things quality education enables.

The group involved in the compilation of these demands acknowledge that the sector has drastically changed since 1976, but fear that issues, such as persistent overcrowding, irregular expenditure and poor infrastructure, block access to “quality” education.

While government has tried to remedy the effects of the education system under apartheid, the education budget remains relatively low in comparison to the current needs of the schools.

For example, the budget for school infrastructure has increased this year by R700-million, but according to Kgasi and Sutherland it is not “proportionate to the urgency and extent of our education sector’s lack of safe infrastructure, that is appropriate for quality teaching and learning”.

According to Equal Education’s research on overcrowding at schools in Gauteng between 2018 and 2020, there is a reality in schools that contrasts with what government reports.

This is owing to government’s use of simplistic measurements, “as well as the fact they use school-wide averages which tell us nothing about what individual class sizes actually look like”.

The group investigated nine sample schools based in the area of Etwatwa, in Gauteng, and compared the reality of overcrowding with what the official government records and data said about the state of those schools.

According to government data, the average teacher-learner ratio was 30:1, none of the schools was over capacity, only 35% of teachers were overworked, and five out of nine schools had a classroom shortage.

The group’s investigation, however, found that all schools had issues of overcrowded classes, with 74% of 751 inspected classes having more than 40 learners and most of the schools having at least 15% more learners than the building could hold.  The group also found that 66% of classrooms were too small for the number of learners in them.

“We know for certain that the problem is much bigger than what is being reported,” according to Sutherland and Kgasi. “So, when Minister Angie Motshekga states that we need R5-billion and 16,000 classrooms to solve overcrowding, we know she is likely only trying to shave off the tip of the iceberg.”

Issues of learning losses are also rising on the agenda.

“This has massive and long-term implications, especially when learning losses occur during the foundation phase, as this phase of learning is essential for the development of learners’ numeracy and literacy skills, which is already especially low,” Sutherland and Kgasi stated.

Mhlanga said that the safety and health of students, teachers and officials, is a top priority for the DBE. This could not be separated from the DBE’s “desire and commitment to return learners to school as early as possible to safeguard their opportunities of access to education,” Mhlanga said.

According to Shari Maluleke, who is the co-founder of the Menstrual Project, seven million South African girls cannot afford menstrual products, also impacting the loss of the school year.

“The truth is, nobody knows the real number — it could be much higher,” Maluleke said. “If a menstruator bleeds for fivve days in a month, they could end up missing 50 to 60 days of schooling.”

Maluleke said that the education system is failing many young people because of the lack of education on menstruation. “We need to have systems in place that allow people to menstruate with dignity and safety,” according to Maluleke, who called for the need for free provision of sanitary products.

Issues around “period poverty” and its consequences are hardly addressed, Maluleke said. DM

Rebecca Pitt is a  regular Daily Maverick contributor and former intern at Daily Maverick who graduated with a Masters in Linguistics at Stellenbosch  University in 2022.