‘Do you trust us?’ – Youth activists on having a seat at climate talks 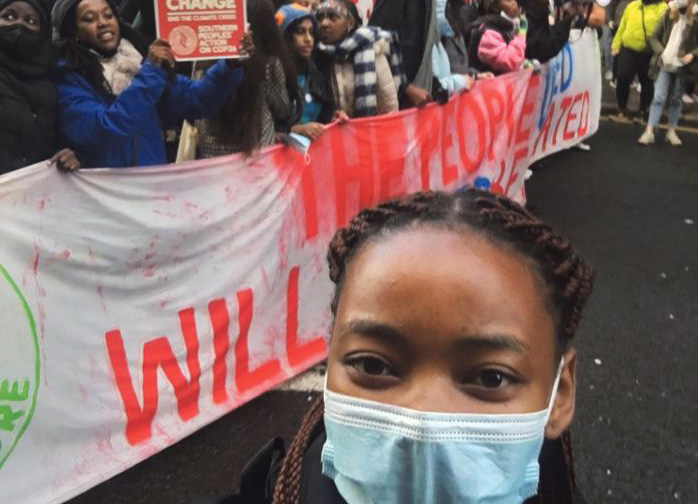 Young climate activists say they are tired of young people being used as tokens, only noticed one week of the year, having a perfunctory or symbolic role in discussions and then being discarded.

This question was posed by 22-year-old youth activist Mitchelle Mhaka to policy and civil society experts – and our leaders in SA – during an intergenerational dialogue on youth tokenism on Wednesday.

Mhaka, the 0perations and programmes coordinator for youth climate activist organisation African Climate Alliance (ACA), was speaking on a panel hosted by the Climate Ambition to Accountability Project, in partnership with the World Wildlife Fund (WWF) SA, the Institute for Economic Justice (IEJ), and the South African Climate Action Network.

Mhaka said the youth of 1976, who we commemorate every year on June 16, and who are in power right now, do not support the youth of today enough.

“If they could tap into the spirit they had in 1976, they would be able to connect with us,” said Mhaka, explaining that the issues youth face today – poverty, climate change, education – are human injustices they should be able to relate to.

Mhaka said she feels the youth in this country are not trusted, and that’s where this tokenism comes in.

Mhaka said during the panel that she first realised she was being used as a token when she joined environmental activism a few years ago.

“You’d find that on the days leading up to June 16, year after year – and during this year – media houses, people and organisations go on the hunt for you to speak.”

“And I always ask, especially on those panels, where is this energy for the rest of the year? Are we only important in the week leading up to June 16? A lot of times it’s not even about the current youth. It’s more about the youth of 1976.”

Ayakha Melithafa, climate activist and youth commissioner on the Presidential Climate Commission (PCC), told Daily Maverick that she first said she was used as a token when she attended the World Economic Forum in 2020.

“I saw that even though we [cohort of youth invited] attended discussions, and we were speaking directly to the people that could create change, there wasn’t a willingness for them to act.”

Melithafa said that in PCC discussions, she tries to ensure she is not a token by educating herself beforehand and calling out injustices.

She used the example of when she attended community engagement around South Africa with the PCC.

“I called out the fact that the community engagements were not accessible because they were being hosted on weekdays between 9am and 3pm, and a lot of people, especially young people, are in school at those times.”

Melithafa also called out the fact that the documents and technical language used in these engagements were not accessible or easy for young people (or laypeople) to understand.

“Luckily, they listened, and then they provided pamphlets, with more information on what the just transition framework is.”

Should young people have a seat at the table?

Prabhat Upadhyaya, Climate Policy, Plastics, International-National Policy interface at WWF South Africa, said: “As an old saying related to international relations goes, ‘If you are not on the table, then you are on the menu’.”

He added that “climate impact is going to be felt much more severely by the younger generation. It is only moral and ethical to have those who will bear the brunt of climate change to have a say in planning for a sustainable future.”

Melithafa said it’s crucial for young people to have a seat at the table, because it’s clear that we can’t trust our leaders

“I mean, if our leaders had our best interests at heart, then there would not even be a climate movement. Now we have no choice but to actually stand up and be the leaders, since we can’t trust our leaders.”

Gabriel Klaasen, director at ACA, said: “Youth in South Africa have always played a vital role in the changing of our system. The youth during the apartheid era… didn’t want to adapt to the system. We believe the same thing.

Youth activist and campaigner at the African Climate Reality Project, Courtney Morgan, had similar feelings about the history of youth activism in South Africa.

“Young people took on that position, not because they were told to, but because they themselves understood the implications of the regime. So I think it’s really about just taking your future into your own hands.”

The memorandum, which will be handed over during a Youth Day parade on Thursday at the Union Buildings, shows the emphasis that young people place on climate change.

What does the older generation think?

Crispian Olver, part of the Presidential Climate Commission and public policy and management expert – with experience at senior management level in local government, environment and development issues – said during the intergenerational discussion that it’s a two-way street.

Olver admitted there are things that “this decrepit, older generation that has failed” needs to work on – such as adjusting policy to include elements that address youth and adapting processes that allow for proper participation.

However, Olver throws the ball back at the youth generation, wanting them to address their engagement style and their design of organisational processes that follow initial campaigning.

“The repertoire everyone seems to follow is the Greta Thunberg repertoire – shouting down the older generation, saying they are climate criminals and that they failed,” said Olver.

Olver said that as a young person in the 1980s he actively engaged in provocative oppositional politics and he does think there is a place for it – however, there needs to be a “diversity of repertoires”.

Olver says there are decision-making processes in place, whether it’s in government or business, and youth should structure their processes so that they can shape and develop the processes already in place.

Melithafa said, about our leaders and youth having a place at the table, “if you look at those in power and structures of governance in this country, it’s almost like youth do not exist – and that’s where the anger comes from”.

But, as Bulelwa Ngewana, senior member of the intergenerational panel and member of the Open Society Foundation South Africa, said, trust goes both ways.

Ngewana agreed our systems are archaic and restrictive, but conflict resolution is about co-creating solutions through negotiations that happen in good faith.

Ngewana said, “If we were able to birth a democracy through sufficient consensus, surely we can deal with our issues around climate change.” DM

‘Do you trust us?’ – Youth activists on having a seat at climate talks