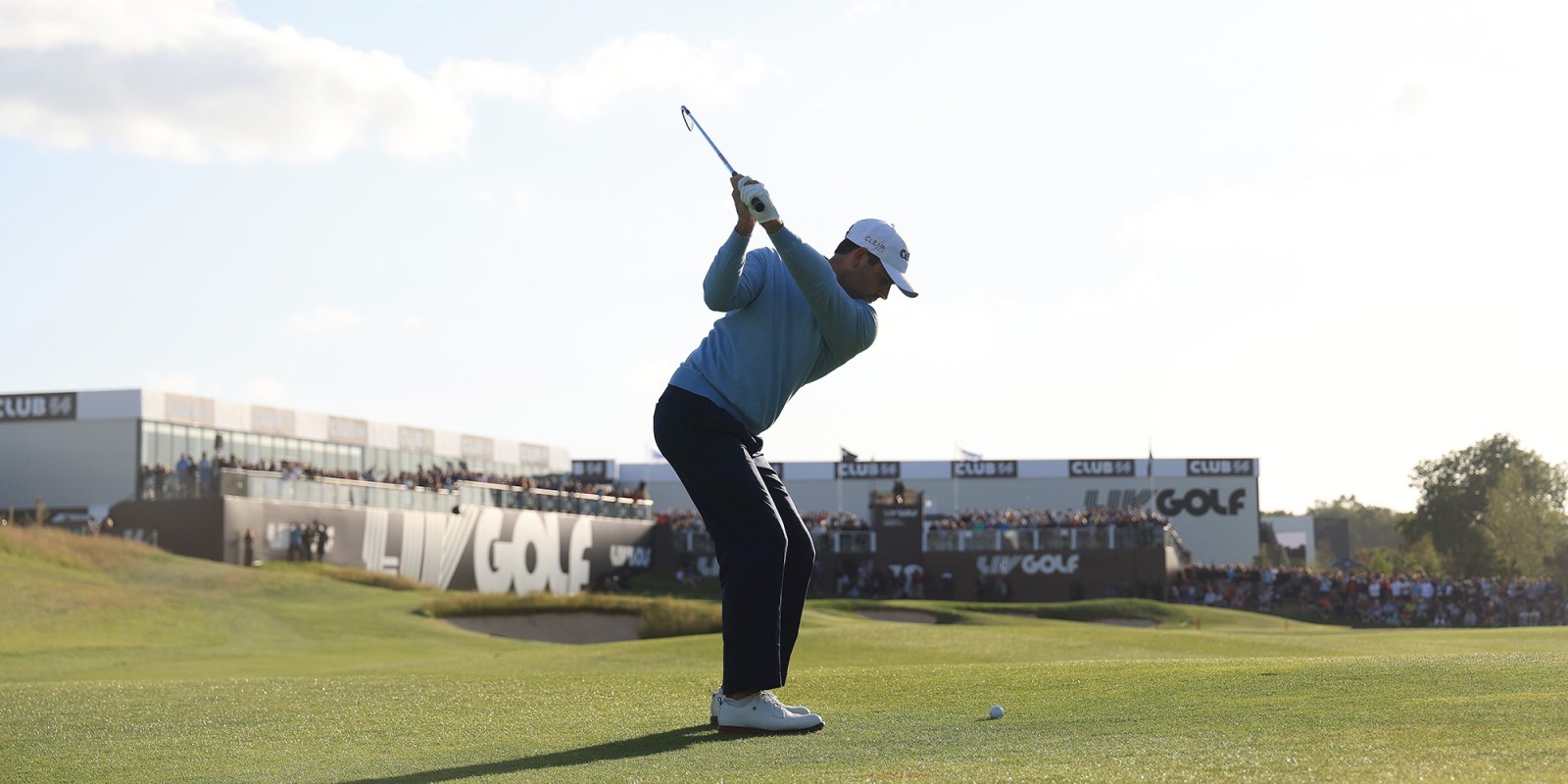 Charl Schwartzel of South Africa plays his third shot from the 18th fairway during the LIV Golf Invitational at The Centurion Club on 11 June 2022 in St Albans, England. (Photo: Matthew Lewis / Getty Images)

During the inaugural LIV Golf Series event in London last weekend, American Andy Ogletree shot scores of 82, 77 and 75 for a 24-over par aggregate. Unsurprisingly, he was last in a limited 48-man field in an event won by South Africa’s Charl Schwartzel.

In the time-honoured tradition of professional golf, after two rounds and at 19-over par, Ogletree would, and should, have been cut from the field and earned nothing for his performance.

But at the Saudi Arabia-backed “tournament”, which was sold as a genuinely competitive event and not a glorified exhibition, Ogletree wasn’t cut and took home $125,000 for coming stone last.

He could have played left-handed, blindfolded and out of his mind on narcotics (that isn’t a suggestion he’s a drug addict) and he would have been paid.

As much as anything — and there were other reasons to be critical of the LIV Golf Series — rewarding a standard of play several rungs below mediocrity is one of its biggest drawbacks. There is no jeopardy.

Another is that players want the best of all worlds.

The golfers who have joined the LIV Series use the argument that they are freelance contractors and therefore free to play where they like, as justification for defecting from the PGA and DP World Tours.

And by defecting, I mean they wanted to retain all their playing privileges on those tours while also chasing the LIV millions. Talk about having your Kabsa and eating it.

The PGA Tour wasn’t having it, though, and has suspended the 17 members that took part in the LIV event. Dustin Johnson, Phil Mickelson, Louis Oosthuizen, Sergio Garcia and Schwartzel are among them. So was Ogletree.

PGA Tour commissioner Jay Monahan wrote a letter to his members (the players) last week, detailing the reasons for the suspensions as well as issuing a veiled warning to future defectors.

These players are no longer eligible for the President’s Cup, either.

The DP World Tour (the former European Tour) hasn’t yet taken the same stance. And neither have the four majors — the third of which, the US Open, starts at Brookline on 16 June.

“I’m a freelance contractor” is a convenient argument to wriggle out of signed memberships players have with the PGA or the DP World Tour, which, by virtue of their own hard work and skill, they earned. But it doesn’t really stack up.

These players are rewarded every time they perform to a certain standard. When they don’t meet that standard, they are cut. It’s ruthless, but the rewards are huge.

Unlike freelance journalists, or freelancers in almost any other industry, the rewards of freelance work are not huge even when you do exceptional work.

It’s doubtful any of these golfers really, truly understand what “freelance” means, though. For them, it’s a buzzword; an excuse to be able to do whatever they like. But freelance, especially when you have a regular contract, means you get paid when you work — and when you do work, for the quality of your output. And you can’t work for a rival if there is a contract in place. PGA membership is a contract.

When you fail to produce work of a decent quality, or to the client’s specifications, you starve. Ogletree and many others in the field of the $25-million tournament did not meet the minimum “freelance” threshold.

Pitching up should not be the minimum standard.

Ogletree, a former US Amateur champion and therefore a gifted player, had career earnings of $38,000 on the PGA Tour prior to the Saudi event.

No matter how badly he performs, he might become reasonably wealthy in the coming months if he plays the remaining seven LIV Series events.

All he has to do is hit a ball around for 54 holes, no matter how poorly and in no matter how many strokes, and he will earn a minimum of $1-million.

Schwartzel and South Africans in the money

At the other end of the spectrum, Schwartzel, the 2011 Masters champion, might have spent some time ogling his bank account on Monday after taking home $4.75-million (R75-million).

Schwartzel won the event with a seven-under total which banked him $4-million and a further $750,000 for being part of the winning team alongside fellow South Africans Louis Oosthuizen, Branden Grace and Hennie du Plessis.

But it was always going to be life-changing. The problem is this — the source of the money is a brutal regime, which has been dissected at length before.

Schwartzel at least came close to acknowledging that the victory and the money did not rank alongside winning a major. It will be interesting if LIV’s handlers sanction such a forthright opinion at the coming events.

“I don’t know if there’s anything that will ever come close to a (green) jacket,” Schwartzel said after winning. “Majors are what define our careers. Obviously, I was fortunate to win the green jacket (The Masters) and I’m very proud of that.

“Yeah, major pressure is definitely different. You know, money is one thing, but there (at the majors) you’re playing for prestige, history. Yeah, winning a major will always top anything you do.

“Where the money comes from is not something that I’ve ever looked at in my 20-year career. I think if I start digging everywhere where we played, you could find fault in anything.

“It’s a question that’s just hard for me to answer because it’s really rhetorical at the end. We can argue this all day long.”

His comments were particularly sobering as he hasn’t performed well enough to qualify for the US Open.

Du Plessis also won’t be at the US Open, but as one of the relatively unknown players in the LIV field, he didn’t shy away from admitting it was about the money.

“Obviously I’ve worked hard to be in this position, and to earn this amount of money I’ve got LIV Golf to thank for that… for giving me the opportunity,” Du Plessis said.