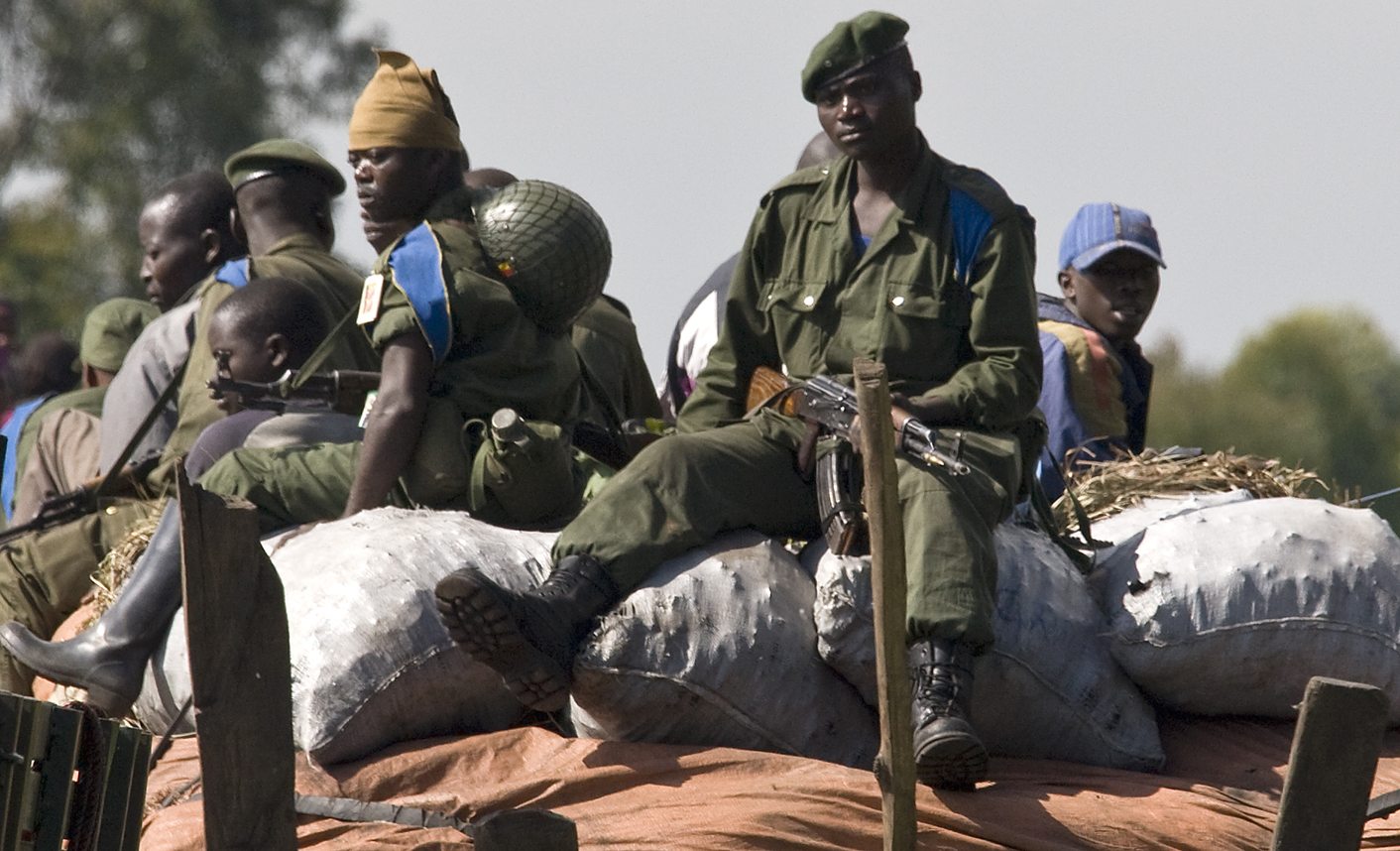 DRC army soldiers (FARDC) sit on top of a truck near the front line with the National Congress for People's Defense (CNDP) forces north of the city of Goma in eastern Democratic Republic of Congo December 7, 2008. (Photo: Reuters/Peter Andrews)

When president Felix Tshisekedi was sworn in on 24 January 2019, he promised that his country, the Democratic Republic of Congo (DRC), would join the East African Community (EAC). In accordance with the Treaty establishing the EAC, member states agreed to promote sustainable economic growth, good governance, and durable peace and security throughout the region.

In this context, the regional body adopted a peace and security strategy as a guiding framework to address security concerns in the sub-region. Three years after his inauguration, president Tshisekedi made good on his pledge by signing the EAC Treaty and thereby joining the regional organisation.

In a speech at State House in Nairobi, Tshisekedi stated that the DRC joined the regional bloc not only for economic reasons but also to ensure peace and security in and beyond the DRC. The eastern part of the DRC has suffered a protracted armed conflict orchestrated by various armed groups for the past 20 years.

Despite efforts by the UN peacekeeping operation (Monusco), the Southern Africa Development Community (SADC) and the Congolese government to cease the violence in eastern Congo, insecurity and instability persist in the region.

The critical question is, what will the EAC need to do in order to bring peace and stability to the DRC’s troubled eastern region?

The admission of the DRC now makes the EAC a seven-partner state bloc with a market population of about 290 million. Additionally, the DRC has bolstered the trade bloc with its GDP of about $54.8-billion, as well as access to strategic mineral resources that can aid the region’s industrialisation efforts. In addition to this, the DRC has over 50% of the continent’s water reserves, providing the EAC with tremendous potential to intervene strategically in the continent’s water insecurity crisis.

The chairperson of the EAC, President Uhuru Kenyatta of Kenya, hosted a meeting attended by fellow EAC leaders, with Rwanda represented by its foreign minister, to discuss the conflict in the DRC’s eastern region. The conflict’s rebel groups were invited to this latest round of DRC peace negotiations, but the most prominent rebel group, the M23 was ejected from the peace negotiations because it attacked the Congolese army while the talks were taking place. This seems to be the pattern in East African mediation talks.

Similar meetings have taken place in the past, such as those led by former Kenyan president Daniel Arap Moi, who was mediating in Uganda’s civil war in the 1980s while the rebel-led conflict was ongoing. While mediation discussions in Rwanda’s civil war were being held in Tanzania, the Rwandese Patriotic Front (RPF) was continuing its war to seize Kigali. These two examples demonstrate that while peace discussions are taking place on one side, the war continues on the other side. The DRC peace talks are similar to previous negotiations in Eastern Africa and the Great Lakes region. For this reason, hope for lasting peace solutions is minimal.

Despite being regarded as Africa’s most successful regional integration bloc, the EAC has a limited track record when it comes to conflict resolution. The bloc did not intervene in Kenya’s post-election conflict in 2008. The EAC’s mediation efforts in the Burundi crisis also exposed the organisation’s shortcomings in dealing with regional conflicts. The Burundi talks were ineffectual due to a lack of political will and differences among the EAC partner states.

When former Tanzanian president Jakaya Kikwete urged the Rwandan government to open discussion with the militia group — Democratic Forces for Liberation of Rwanda (FDLR) located in eastern Congo — a diplomatic spat between Tanzania and Rwanda ensued. Tanzania and Burundi were also left out of the Coalition of the Willing, a group founded to accelerate regional infrastructure development.

These tensions were on display during the Burundi crisis mediation efforts, as EAC partner states disagreed on how to respond to Pierre Nkurunziza’s controversial third-term bid. Kenya, Uganda, and Rwanda were absent at key summits aimed at resolving the Burundi crisis. Furthermore, while the EAC made some bold moves to address the situation, it did not follow through with implementation.

For example, when Burundi rejected the Panel of the Wise’s 10-point proposal, the EAC abandoned it rather than try to mobilise support for a common approach. In this case, the EAC’s ability to deal with the Burundi situation was tested, but the outcome showed that the regional bloc was unable to move the peace talks forward.

The DRC’s political leadership is hopeful that as a member of the EAC, the regional bloc will be able to provide security benefits to their country. However, in order for the EAC to succeed and make a significant impact, a number of issues need to be addressed.

Firstly, the EAC, not political leaders, should take the lead in resolving the conflict. Political leaders in the sub-region have frequently resorted to resolving dispute situations among themselves, thus undermining the EAC’s efforts.

Secondly, the M23 rebel group should be brought to the negotiating table with the Congolese government. The EAC should consider the M23 factions which could potentially derail peace efforts.

Thirdly and most importantly, EAC leaders must have the political will to assist the DRC in resolving this crisis. Political will is critical because all EAC leaders, particularly Burundi, Uganda, and Rwanda, who are significant players in the war, must be fully committed to the peace process. Burundi, Rwanda, and Uganda have been accused of fuelling unrest in eastern DRC to benefit their own countries, therefore their participation in the peace process is critical.

Peace and security are necessary preconditions for sustainable economic cooperation between countries in the sub-region. Additionally, in order to play a meaningful role in conflict resolution, the EAC needs to improve its institutional and technical ability, as well as its financial resources.

Finally, on the DRC side, the government should revisit the issue of the security sector reform, and modernise and adequately equip its army so that it is capable of meeting the challenge posed by rebel and armed groups. For the EAC to effectively manage the conflict situation in the DRC, the above issues need to be addressed.

Given the strategic importance of the DRC, it is in the interest of the EAC members to work together to help the DRC achieve its peace, security, and development objectives. DM

Hellen Adogo is Research Assistant and Tumba Tuseku Dieudonné Research Fellow at the Institute for Pan-African Thought and Conversation (IPATC), University of Johannesburg.