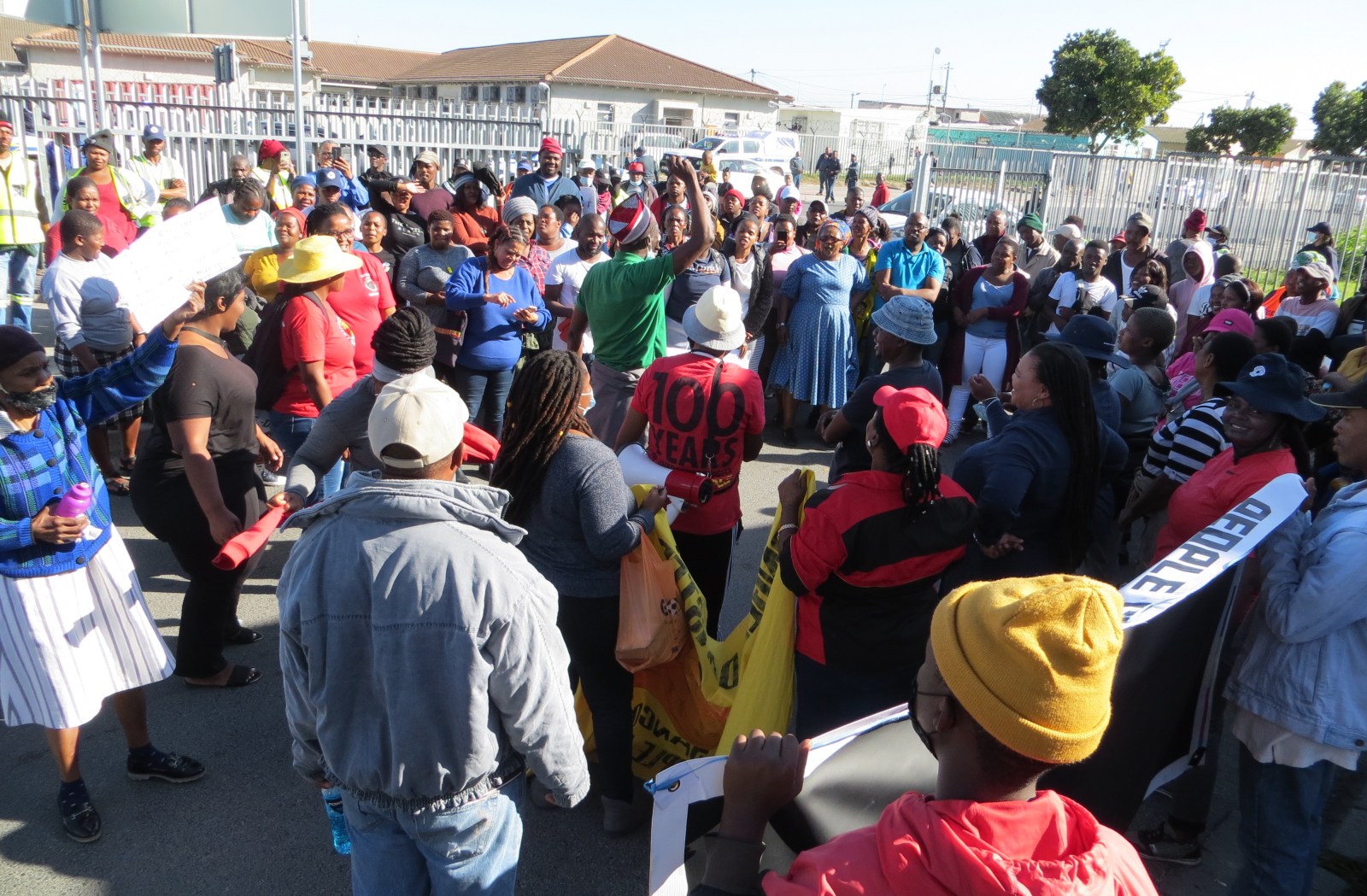 Residents outside the Civic Centre in Delft where they handed over memos demanding better roads, public facilities and policing among other things. (Photo: Vincent Lali)

‘We want a bigger police station and more police to serve the community’ says Sanco leader.

Led by the South African National Civic Organisation (Sanco), the marchers had prepared memorandums addressed to the City of Cape Town, Delft police station and senior officials at the Day Hospital.

Makhwenkwe said the residents were fed up with poor service at Delft police station. “Residents spend hours in long lines just to get their documents certified and to collect affidavits. The police don’t seem interested in serving the community,” he said.

Makhwenkwe said he had been to Delft police station to report the theft of his cables and an electricity box last week and had spent two and a half hours waiting for an officer to take his statement. “We want a bigger police station and more police to serve the community,” he said.

Thandazwa Kalkop, deputy chairperson of the Mongezi Danster Sanco Branch, said shelters and toilets should be built at taxi ranks. “We stand in the rain while waiting to board taxis. We have no shelter. We want to be able to relieve ourselves while at the taxi rank,” she said.

Bonani Mbolekwa said patients waiting to enter the Day Hospital should be allowed to stand under the shelter in the parking area on rainy days where staff vehicles are parked. “Cars belonging to staff members get parked under shelters while sick residents shiver in the cold and rain,” he said.

Delft station commander Brigadier Luyanda Damoyi, told protesters that the police “deal with long lines every day.” Damoyi urged residents to get documents certified at churches and elsewhere to “allow the police time to focus on crime”.

Mzwamadoda Gaji, a Delft Day Hospital facility manager, said the hospital is taking steps to reduce queues. “We give patients with chronic diseases six-month treatments,” he said. The hospital had introduced a system where patients get a code to open lockers to collect their medications to avoid having to stand in long lines. “We started using the system about two years ago, but the number of people using it is still low,” he said.

“We encourage residents at Delft to make an appointment and to arrive at least 30 minutes before their appointment to avoid longer waiting times,” she said.

When asked about the demand for patients to be allowed to queue in the parking area, she said, “The parking area is currently not conducive.”

The City had not responded to GroundUp’s questions at the time of publication. DM