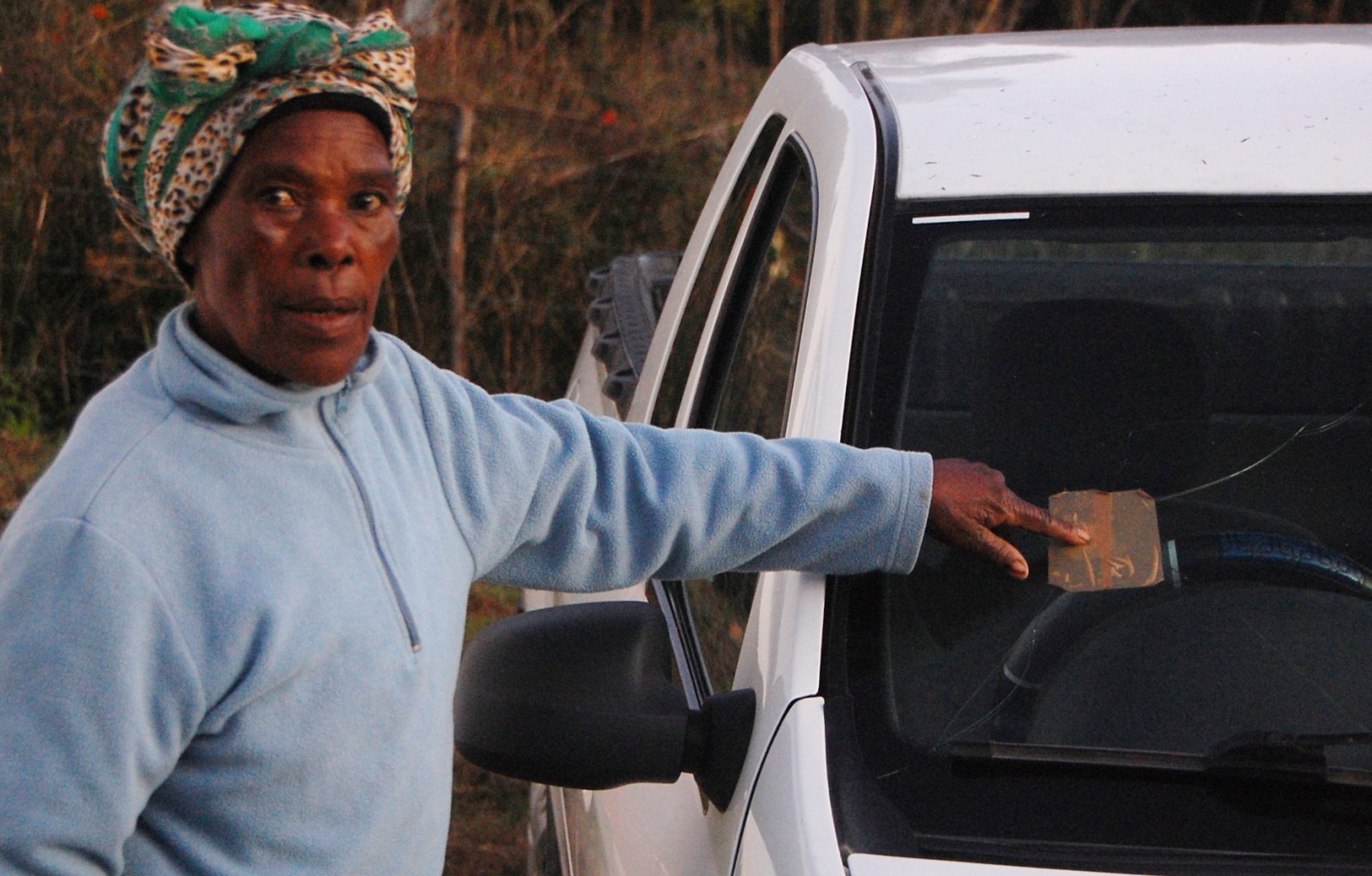 Lindeni Lombo, the mother of murdered ANC councillor Thembinkosi Lombo points out the bullet hole in his windscreen on 1 June 2022. (Photo: Phumlani Thabethe)

The ANC hung on narrowly to a ward in Greytown, KwaZulu-Natal in Wednesday’s by-election, which was called after the assassination of ANC councillor Thembinkosi Lombo. This is a report from the ground in Ward 13.

Lindeni Lombo (73) and her daughter Dumazile (34) were among the hundreds of voters who turned up at Bangumuzi Primary School for the hotly contested by-election in uMvoti Local Municipality’s Ward 13 in KwaZulu-Natal.

The kanga with ANC colours and a T-shirt bearing Cyril Ramaphosa’s face gave away who they voted for. “We couldn’t vote for anyone else… we’ve got a grave of an ANC cadre in our home,” said Dumazile.

Thembinkosi Lombo (34) – loving son of Lindeni and brother to Dumazile – was the previous ANC councillor for the ward. He lasted no more than three months after he was elected in the 1 November 2021 local government polls.

On 25 February 2022, Lombo had arrived from an ANC meeting and was parking his bakkie in the Greytown CBD when he was ambushed by three unknown men who opened fire, killing him instantly.

“We were still expecting so much from him,” said his mother. “Even all these houses were built by him… he was taking care of us as his family. Now that he is gone, I don’t know how I will survive.”

Dumazile said she had a close relationship with her brother. “We warned him as the family that he must not join these political activities because they are dangerous. But people came here at home and pleaded with him to stand as councillor and he agreed. I think serving the community was his call.”

Another relative, who asked not to be named for fear of retribution, said the family strongly suspected that Lombo’s killing was an ANC inside job.

According to the relative, the ANC in uMvoti is divided between those who want the previous mayor to remain in his position, and those who want a new mayor.

“He told us that if anything happened it would be about disputes around positions in the uMvoti Local Municipality.”

Lombo’s case has been handed over to the national task team investigating political killings. One suspect has been arrested and has appeared in court.

The stakes were high in Wednesday’s uMvoti by-election – before Lombo’s murder, the ANC had 10 seats, the IFP nine, the Abantu Batho Congress (ABC) seven and the DA one.

The ANC’s candidate, Sihle Ndlovu, was declared the winner with 33% of the vote, edging the IFP’s Sthembiso Mthembu. The rest of the votes went to ABC candidate Musa Phungula and the EFF’s Mzwandile Ximba.

The split in ANC votes allowed the IFP to take over the municipality. Owing to ANC infighting, the IFP was able to convince the ABC and the DA to form a coalition government in uMvoti. The party’s Gabriel Malembe was elected as mayor as part of the agreement.

Another reason for the high stakes is that the ABC and the ANC had started finding each other and they are planning a vote of no-confidence in the mayor and his executive.

The ANC-ABC relationship and coalition is not a new thing. ABC leader Philani “PG” Mavundla is a former ANC leader and former mayor of uMvoti, and is now the deputy mayor of the eThekwini Municipality thanks to a deal with the ANC.

Hlengiwe Mavimbela, KZN’s MEC for arts, culture, sport and recreation, who is also the champion for the Umzinyathi District (uMvoti Local Municipality falls under Umzinyathi), was one of the senior ANC leaders deployed in the Ward 13 district to galvanise support for the party.

On election day she said they would be elated to retain the ward. “The people of this ward had given the ANC a five-year contract to work for them. Unfortunately, our councillor, Thembinkosi Lombo, didn’t even finish six months as he was brutally killed.

“If our candidate wins, he will have to deal with this area’s many challenges,” Mavimbela said, adding that these include a lack of roads and water as well as poverty and unemployment. She was also worried about the number of killings and unsolved murders in the district.

The atmosphere was tense at all four voting centres, but political supporters were clad in the party colours, with others even singing their party songs and slogans.

Independent Electoral Commission presiding officers said they had not encountered any major incidents or complaints by party agents at any of the voting centres.

Many people in this area are unemployed, while those who do have jobs work on wattle tree and mealie plantations.

Jericho Mazeka (45) was among those lining up to vote at the Sangweni Combined School. He said he had worked on a plantation before being retrenched a few years ago, and is unemployed now. He said his vote was secret. “I came to vote here because I want change in my life for the better.”

Many locals echoed this.

Now all those hopes rest on the shoulders of Sihle Ndlovu, the victorious ANC councillor.

Nhlakanipho Ntombela, ANC spokesperson in KZN, said in a statement they were worried about the margin of their win.

“We want to extend our profound gratitude to the people of uMvoti who came out in numbers to exercise their democratic right and voted ANC. We commit ourselves to improve the quality of life of our people and not only in Ward 13 but in the province at large.

“Looking at the real figures of the outcome of this by-elections wherein we received (a) total of 755 votes and an overall voter turnout of about 43%, we are concerned over a narrow win. We take this as a learning experience which will inspire us to do more and speed up service delivery programmes,” said Ntombela. DM