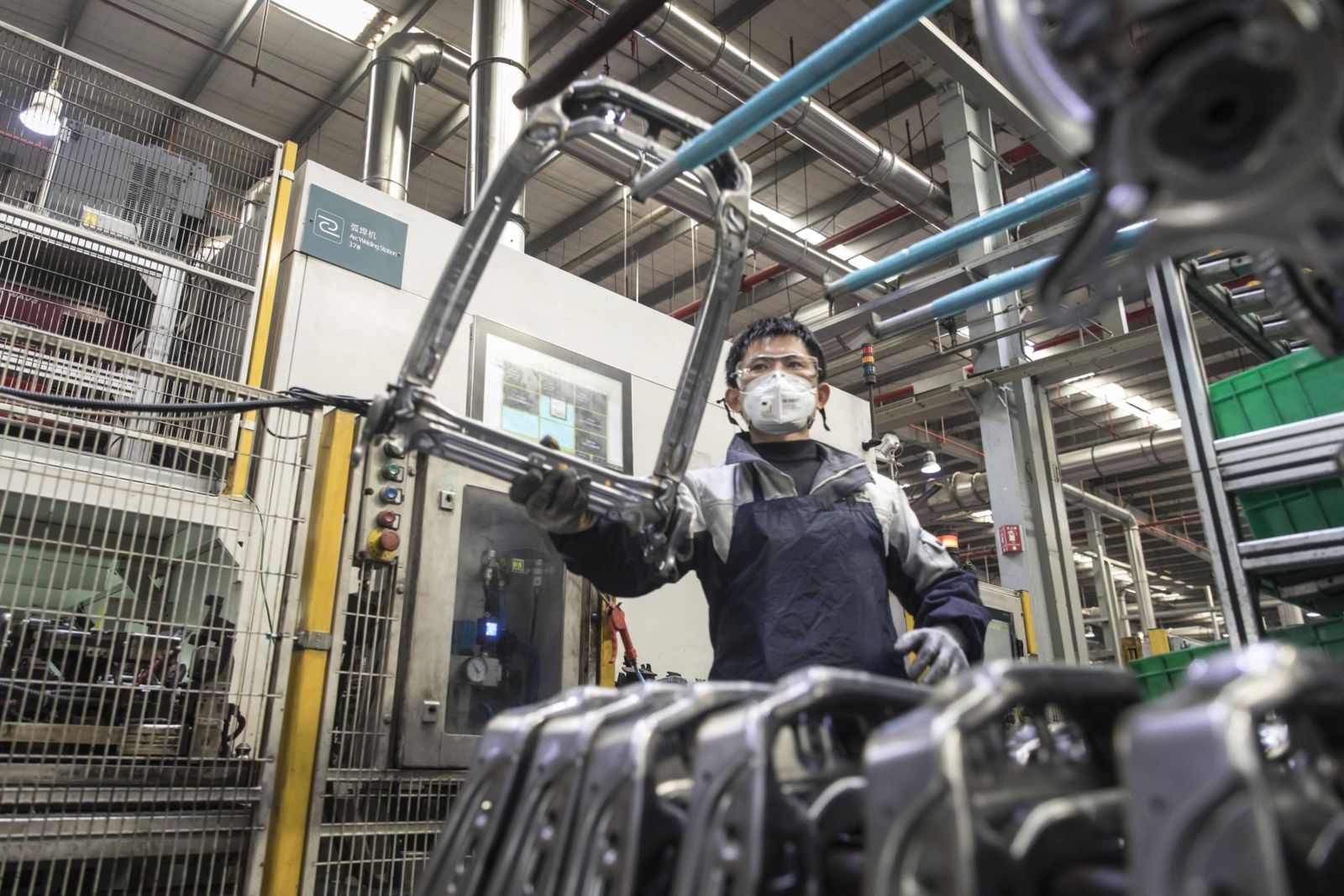 An employee wearing a protective face mask lifts a component from a rack on a production line during a media tour at a Yanfeng Adient Seating Co. factory in Shanghai, China, on Monday, Feb. 24, 2020. Photographer: Qilai Shen/Bloomberg

China’s factories still struggled in May, but the slower pace of contraction suggests that the worst of the current economic fallout may be coming to an end as the country starts to ease up on its tough lockdowns.

The official manufacturing purchasing managers index rose to 49.6 from 47.4 in April, according to data released by the National Bureau of Statistics on Tuesday. A reading below 50 still indicates a contraction, but the gauge was better than the median estimate of 49 in a Bloomberg survey of economists.

The non-manufacturing gauge, which measures activity in the construction and services sectors, increased to 47.8 from April’s 41.9, above the consensus forecast of 45.5.

While the economy still hasn’t completely turned a corner, the better-than-expected data does suggest that efforts to ease some restrictions are helping companies resume production and putting a floor under the decline in activity. Even so, the pace of recovery will be slow this time around, and economists still predict growth will weaken to 4.5% this year — well below the government’s target of around 5.5%.

Tuesday’s data indicates that “in-contact services sectors are still the epicenter of slowdown while the initial manufacturing sector recovery has been slower,” compared to the 2020 lockdown, said Liu Peiqian, chief China economist at NatWest Group Plc. “We think the pace and scale of recovery might be more gradual.”

The main sub-indexes rebounded in May from April, with the sharpest improvements seen in suppliers’ delivery times and new orders — though those sub-gauges remained in contraction. The index measuring the delivery time of suppliers rose to 44.1 from 37.2, suggesting that it’s taking less time for raw materials to reach their manufacturing customers.

Activity at large enterprises expanded, reversing course from April. Conditions at small- and medium-sized firms continued to contract, though at milder paces.

Covid outbreaks, along with international factors, “have had a great impact on economic operation,” said Zhao Qinghe, senior statistician at the NBS. While manufacturing production and demand have “recovered to varying degrees,” he said, the momentum “still needs to be strengthened.”

China’s benchmark CSI 300 Index added 1.1% as of the mid-day break, leading stock gains in Asia, with information technology and consumer staples the main gainers. The yield on China’s 10-year government bonds climbed 2 basis points to 2.79% as of 11:34 a.m. local time.

The outlook for China’s economy has darkened this year amid widespread Covid outbreaks and stringent controls to curb infections. Economic activity collapsed in April, with retail sales and industrial output shrinking and the jobless rate soaring.

While the lockdown of Shanghai that spurred a lot of the disruption has begun to ease, allowing some activity such as port operations to recover, the effects of the restrictions on production and supply chains will still likely be felt for months as businesses struggle to restart.

A set of early indicators measuring business confidence, declines in home and car sales and other metrics suggested China’s economy remained deep in a slump in May. Small business confidence, for example, dropped to the worst level since the early months of the pandemic.

Pressures from supply shocks and a fall in demand “are still severe and the impact of the pandemic on economic growth cannot be underestimated,” said Zhang Liqun, a researcher with the State Council’s Development Research Center, in a statement released by the China Federation of Logistics and Purchasing after Tuesday’s PMI data.

More than 50% of the surveyed companies said raw material prices and logistics costs are high, he said, while over 40% said demand is insufficient. The federation compiles the PMI data alongside the NBS.

Even if China manages to right its supply chains quickly, any sustained recovery is still challenged by a lack of demand. The threat of a cycle of Covid lockdowns should there be more outbreaks has weighed on business confidence, making them more cautious about expanding. Consumers are also likely save up, rather than spend, if they’re uncertain about the future.

The surprisingly big gains in China’s May PMIs suggest the worst of the economy’s slump may be over. The data show activity still broadly shrinking — but much less so than in April. Both production and demand saw much narrower contractions in the manufacturing sector.

Beijing has tried to support growth through a variety of measures, and recently rolled out a broad support package that covered everything from consumption and investment to tax cuts and loan support. Premier Li Keqiang has also repeatedly called for local governments to do more to stabilize growth, warning of dire consequences if they don’t move decisively.

The recovery ultimately comes down to whether China locks down cities in the future, said Iris Pang, chief economist for Greater China at ING Bank NV. If those restrictions continue, “damages on the economy could be deep.” BM