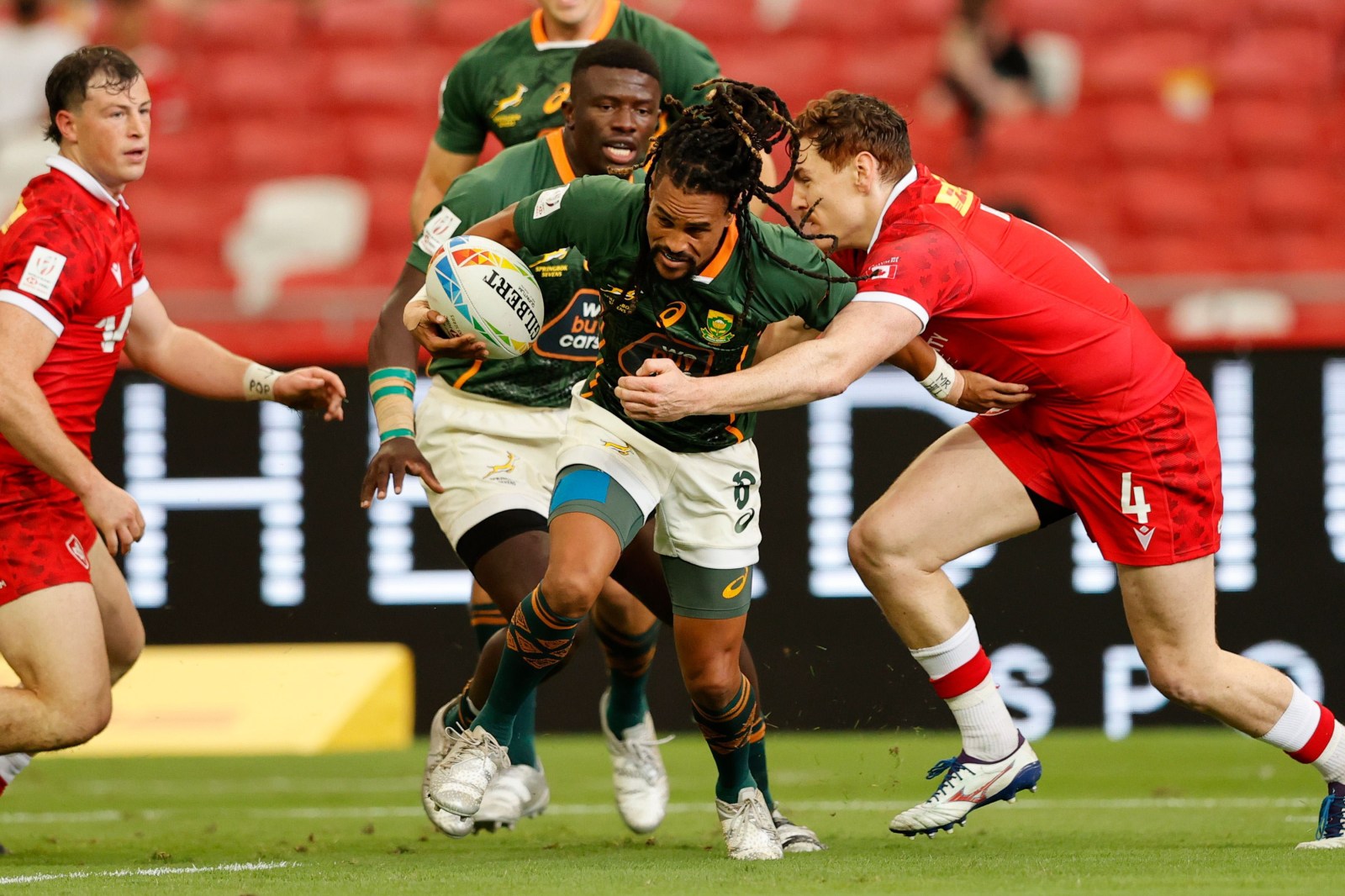 South Africa suffered a surprising defeat in their first game at the Toulouse leg of the HSBC World Sevens Series against Ireland on Friday.

The Blitzboks succumbed to a shock 21-12 defeat to Ireland in their first pool stage match in Toulouse, their first-ever loss to the Irish in the Sevens format.

It comes after winning the first five World Series tournaments in dominant fashion. The Blitzboks now face an uphill battle to retain their lead at the top of the overall World Series standings, leading by a mere six points over second-placed Argentina.

The Blitzboks had a last-minute setback before departing to France as one of their more experienced players, Selvyn Davids (27 tournaments) was withdrawn from the squad before their departure from Cape Town on medical grounds.

The playmaker was replaced in the squad by Springbok Sevens debutant Dalvon Blood who graduated from the SA Sevens Academy.

“I was first called into the WP under-17 squad and when I made the SA under-18 Sevens team the next year, I started to dream of the ultimate step and that is playing for the Blitzboks,” the Grabouw-born player said.

After finishing school, Blood was contracted to the SA Rugby Sevens Academy where his dream began taking fruition. “You are training with all these Blitzbok stars and that elevates your game to the next level. They are such a great group of guys, helping the Academy guys,” said Blood.

The Blitzboks were aware of the challenge they faced during the pool stages this weekend.

“Ireland have been doing very well in recent times and have been together as a team for a while now, so they are formidable opponents,” said team captain Siviwe Soyizwapi prior to the kick-off in Toulouse.

The Springbok Sevens also face Spain and a tough Samoa team on Saturday, who knocked them out at the quarterfinal stage in Vancouver.

“Spain showed us how well they can keep the ball alive in our previous encounter and we will not take them lightly,” said Soyizwapi about their European opponents.

“Samoa’s physicality proved a challenge for us last time around, so we need to be better when we face them this weekend. We have prepared well though and are looking forward to the weekend,” said the skipper.

The Blitzboks had a month break between Vancouver and Toulouse, they spent three weeks on mental and physical preparation in South Africa before heading to France to acclimatise to the conditions they will play in.

“We trained well since we arrived here and I loved the attitude the players showed during those sessions, especially our defence session. That is normally our toughest session of the week, and the guys really came through that well, so we are ready to play. This is another opportunity for us, and we want to grab it with both hands,” said Soyizwapi.

The Springbok Sevens team’s discipline let them down once again against Ireland as they had to play with six players for two minutes due to a yellow card shown to Zain Davids for a cynical tap-down.

Their ill-discipline plagued them throughout the encounter as they failed to gain any momentum as Ireland gained ascendency. Discipline was a key area the Blitzboks worked on in preparation for Toulouse but their first match indicates there is yet more work to do.

“We’ve always been very competitive at the breakdowns, especially at defensive breakdowns because we know the game is all about ball possession. From a penalty perspective, we did give away far too many penalties in the last two tournaments (Singapore and Vancouver), it’s definitely something that we looked at,” said coach Neil Powell prior to his team’s departure to France.

“Some of those penalties probably came out of frustration as well because we didn’t play to our potential. Breakdown and discipline are two of the things that we really want to work on and make sure we are better in Toulouse.” DM