Blitzboks’ recent struggles send a reminder that nothing is guaranteed 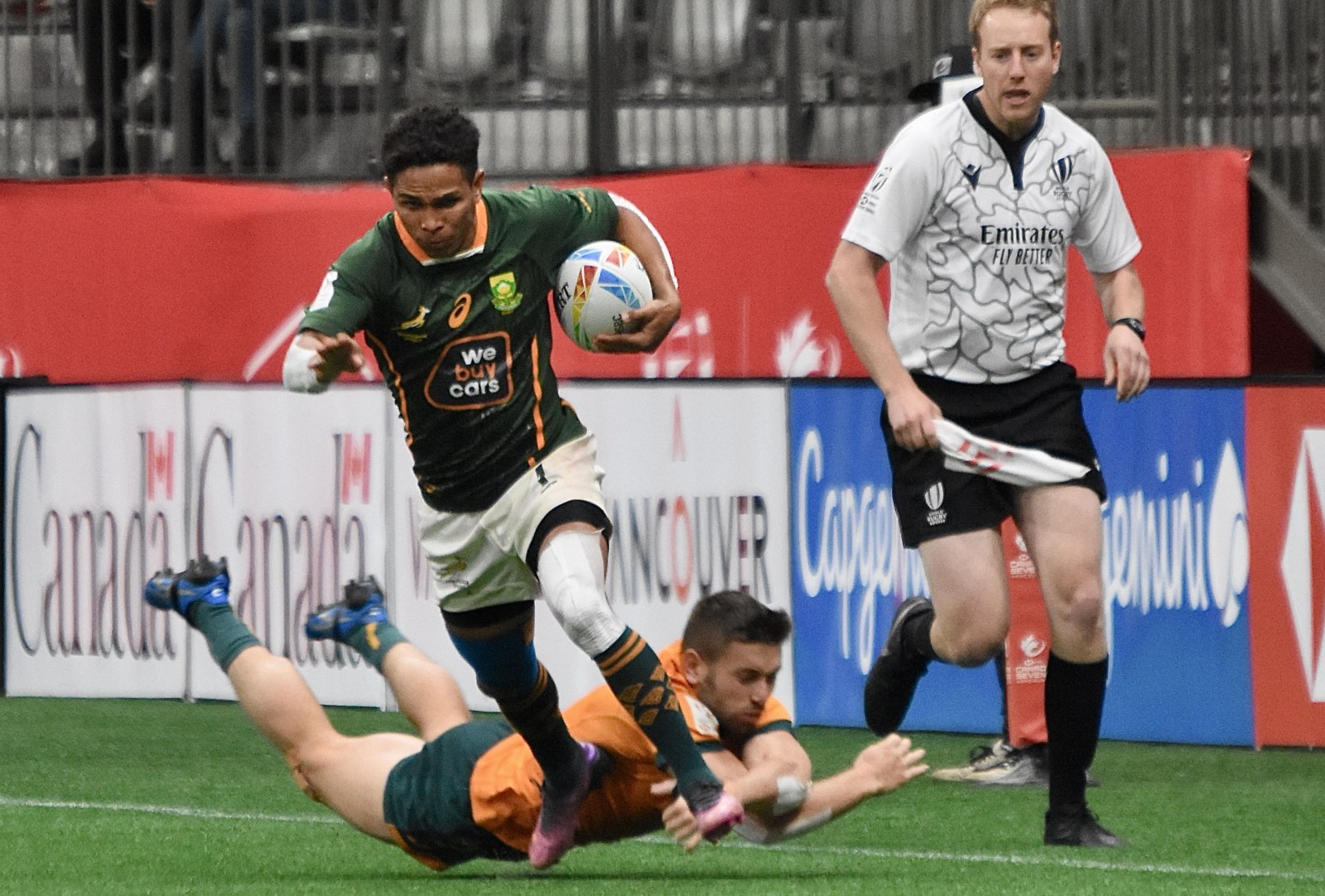 The Blitzboks have wobbled in the last two legs of the 2022 HSBC Sevens World Series, but they still top the standings.

The Blitzboks have hit a Pacific island speed bump after cruising at full throttle at the beginning stages of the Sevens circuit.

The Springbok Sevens team made light work of the opening four tournaments on the Sevens circuit, winning in Dubai twice then in Malaga and Seville on consecutive weekends.

But the tide has since changed with the introduction of the Pacific island teams – Samoa, New Zealand and Fiji. Samoa and New Zealand missed the first four tournaments due to Covid-19 restrictions while Fiji missed two.

In the two most recent tournaments – Singapore and Vancouver – the Blitzboks faced all three Pacific nations, beating only New Zealand – the most decorated team in Sevens Rugby history – in the fifth-place playoff match over the weekend.

Instead, the other two island nation teams have been the undoing of the Blitzboks.

In Singapore, it was the flying Fijians who kicked the South Africans out of the Cup at the quarterfinal stage, before they went on to win the tournament – a welcome return to the Sevens circuit.

A week later in Vancouver it was Samoa’s turn to make the South Africans pay for their sloppiness as they made light work of the Blitzboks, beating them 28-17 as the Boks failed in the quarters once again.

“We lost to Samoa – and credit to them – by playing against ourselves as well,” said James Murphy, who scored the winning try against New Zealand.

“That first half was horrible. We conceded penalties, we gave the ball away and allowed them too much of a lead. We need to cut out those errors, because when we did against France and New Zealand, we could stay in the game.”

With Argentina winning the Cup final against Fiji in Vancouver, they edge closer to South Africa who lead the World Sevens Series standings with 111 points, with Argentina second (105).

“It was a tough two weeks and not something that we are happy about as a team,” said Blitzboks coach Neil Powell.

“We will have to ask tough questions to ourselves on what happened and what areas we need to improve on. As individuals, we will have a serious conversation on our performances, but also as a team, where we did not function as we should have.”

The Blitzboks pride themselves on not making excuses and solely focusing on playing what is in front of them. They have, however, had bad luck with injuries.

Stalwarts and veterans of the sevens game, Branco du Preez and Justin Geduld, have been unavailable in recent tournaments due to injuries, while upcoming stars Muller du Plessis and hat-trick hero in Singapore, Sakoyiso Makata, have also suffered recent setbacks.

Despite this Powell has not used injuries as an excuse for the South Africans’ recent woes. It is evident the struggle for continuity in selection has affected the Blitzboks’ performance consistency.

“We had hot and cold moments and sadly those cold ones proved crucial and very costly. It is something we need to look at – the players and the coaching staff alike – to see how and why it happened and what can be done to prevent that,” he said.

There are three tournaments left on the sevens circuit for the Blitzboks to find the form they had in the early stages and clinch a fifth World Series title.

Fortunately, the next tournament in Toulouse is a month away (20 to 22 May) so the Blitzboks could welcome back a few of their proven stars when it rolls around. The tournament heads to London a week later before concluding in Los Angeles, where the Boks are reigning champions, at the end of August.

Between the London Sevens and the Los Angeles Sevens events there is the small matter of the Commonwealth Games. The Blitzboks failed to reach the podium in the previous edition in 2018 but will be keen to make amends in Birmingham this year and vie for gold.

Then, a few months later, the Sevens World Cup kicks off in Cape Town in September. The Blitzboks have never won a World Cup title – their best result was a runners-up medal in 1997.

September is usually the start of warmer weather in Cape Town and with 55,000 fans (Covid-permitting) in support at the world-class stadium, the Blitzboks will have an ideal opportunity to break their World Cup duck.

However, the performances and results need to turn around in Toulouse in  May if they are to have any chance of jostling for World Cup glory.

The Blitzboks have the talent and the work ethic to clinch three major titles in 2022, but sometimes those attributes are not enough.

“This is a physical as well as mental game, and at times we did not mentally respond the way we used to,” Powell said after Vancouver.

The Blitzboks will need to be at their best in every facet for the rest of 2022 if they are to scale heights they have not scaled before. DM