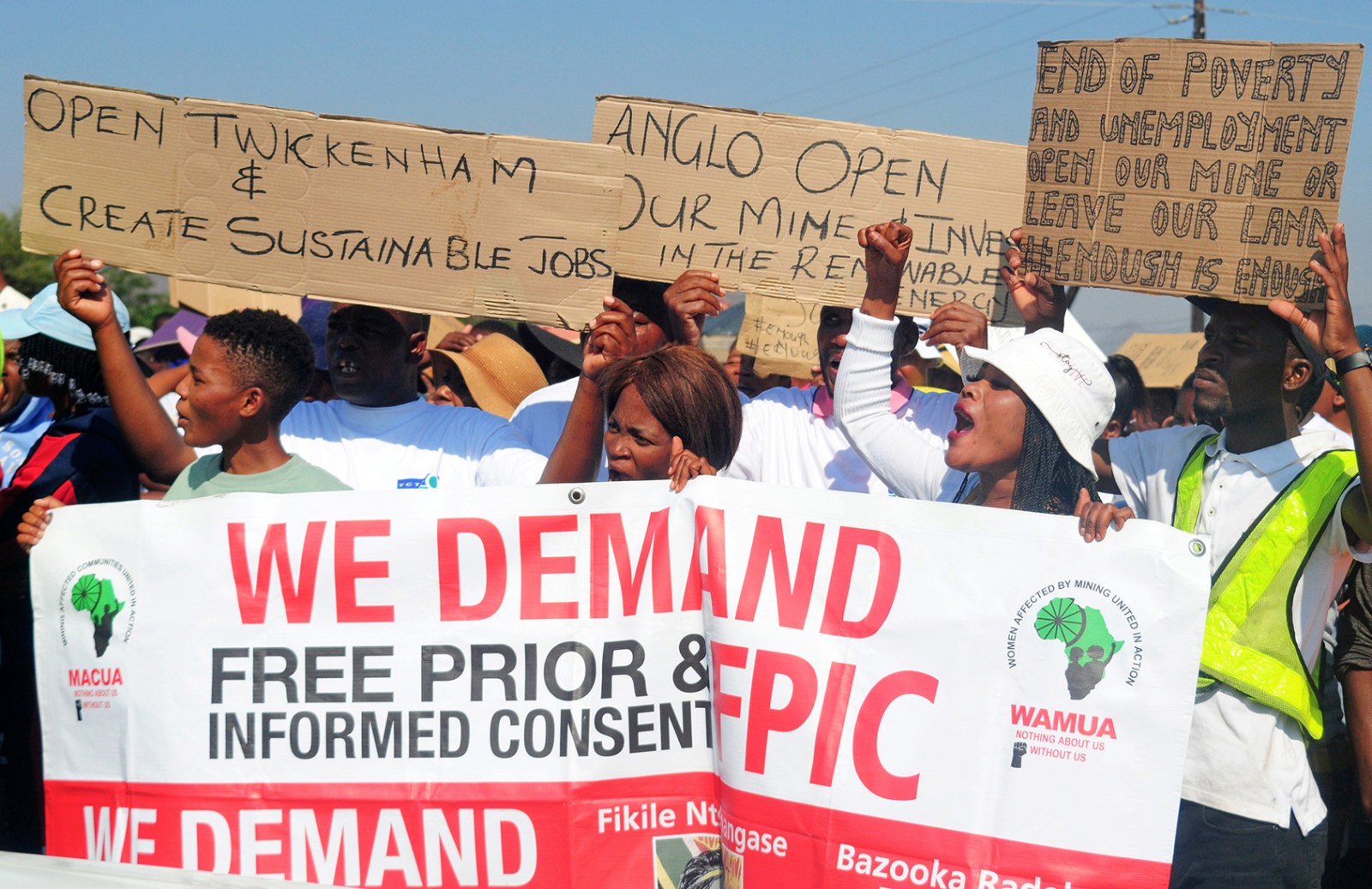 The impoverished locals – who blame mining for the loss of arable land and destruction of the rural agrarian economy – want the Twickenham mine to open or forfeit mining rights.

Sekhukhune residents have given mining giant Anglo American Platinum (Amplats) until December to reopen a mine that was placed under care and maintenance six years ago or hand over its licence to the affected communities.

Amplats placed the Twickenham mine, which is in an area consisting of rural villages about 40km northwest of Burgersfort in Limpopo, under care and maintenance in 2016.

“If it cannot open the mine and fulfil the demands, Amplats must forfeit the mine to the state. We suggest that Amplats hand over mining rights to the communities, to be socially owned on the basis that the reason for placing the mine under care and maintenance is no longer valid,” said Mametlwe Sebei of the General Industries Workers Union of SA.

The union is an ally of the Sekhukhune Combined Mining-Affected Communities (SCMAC), which marched to Amplats’ offices in Matubaview on Friday. SCMAC is a non-profit, community-based organisation whose membership is made up of communities and individuals from various parts of the Sekhukhune district.

SCMAC is demanding that Amplats reopen the Twickenham mine and create sustainable jobs.

“The mine should begin preparations from June to December 2022, hiring workers from the community also. The mine should return to full operation in January 2023,” the organisation said in a memorandum handed to Amplats representatives.

SCMAC is also calling for Amplats to “invest in renewable energy and create sustainable job opportunities”.

“Amplats must develop a plan to draw energy from renewable supplies, and in the process provide skills training for manufacturing and maintenance of the solar panels and storage facilities for the clean energy generation.”

In September 2001 Amplats announced it was proceeding with the development of a new platinum group metals mine on the farms Twickenham, Paschaskraal and Hackney on the eastern limb of the Bushveld Igneous Complex.

Amplats said it expected the mine to be in steady-state production by 2006 and that at full production about 2,200 people would be employed on the mine. The company further said the establishment of the mine would create opportunities for other economic and small business development in the area.

However, placing the mine under care and maintenance has plunged the area into a crisis.

Taeya Hlongwa, one of the SCMAC leaders, said local communities should be empowered to establish factories that will produce items that can be used in renewable energy projects to fight the unemployment scourge.

Hlongwa said that before the mine was established people in the area worked the land and sustained themselves through agriculture. However, he charged that the establishment of the mine destroyed water resources and land which made it impossible for people to continue with agriculture.

A report released by Wits University in conjunction with SCMAC in February found: “Twickenham Platinum Mine acknowledged in an annual compliance report that the mine had failed to complete a project related to water and sanitation in schools before its deadline. This project remains unfinished more than three years later. When pressed for answers about this lack of compliance, mine representatives acknowledged the delays in implementation, but blamed problems with procurement.”

The report, Unearthing the truth: How mines failed communities in the Sekhukhune region of South Africa, concluded that the “failure to implement social and labour plans is a compounding factor, which negatively impacts the enjoyment of human rights by communities, such as the rights to education, access to healthcare, livelihoods, and water”.

The report also found that the Department of Mineral Resources and Energy failed to adequately regulate mines and carry out its oversight role to ensure the implementation of social and labour plans in the Sekhukhune region.

The Sekhukhune region is home to more than 30 platinum group metal mines but continues to have one of the highest poverty rates in Limpopo and nationally.

A district development model and analysis report on the Sekhukhune District Municipality found that in 2019 there were 689,310 people living in poverty based on the upper-bound poverty line. The report further noted that there had been a rise in unemployment in the district between 2008 and 2018, with a total of 93,900 people unemployed in Sekhukhune, accounting for 28.17% of the total number of unemployed in Limpopo.

Amplats spokesperson Nomonde Ndwalaza confirmed that the Twickenham mine project was placed on care and maintenance in 2016.

“Despite this, we continue to be involved in the betterment of the communities surrounding the operation, and we remain committed to playing our part to address deep socioeconomic challenges, through providing local employment, increasing procurement opportunities for host community businesses, and the direct shareholding of host communities in our company through our Alchemy community development trusts,” said Ndwalaza.

She said other 2022 initiatives currently under way at Twickenham include Anglo’s Covid-19 Unrest and Rebuild programme, investments in social and labour plans, local economic development projects, and investments in health and education projects as part of their Sustainable Mine Plan commitments, to the value of R55-million.

“We continue to study options to ensure a sustainable future for Twickenham that will benefit host communities and the broader Limpopo province,” said Ndwalaza.

But Sebei said there were problems even when the mine was in operation.

“But when Twickenham has been running, we also experienced pollution, water abuse, labour exploitation and depletion of the mineral resource wealth without meaningful compensation,” he said.

The Sekhukhune area has been earmarked for the development of the Fetakgomo-Tubatse Special Economic Zone. Limpopo premier Chupu Mathabatha said in his State of the Province Address recently that 21 companies with a potential to invest R45-billion and create more than 8,000 jobs have shown interest in the special economic zone.

Mathabatha said the first phase, covering 316 hectares, will integrate the expansion of an industrial hub, focusing on building a mining-input-supplier precinct. DM/MC/Mukurukuru Media