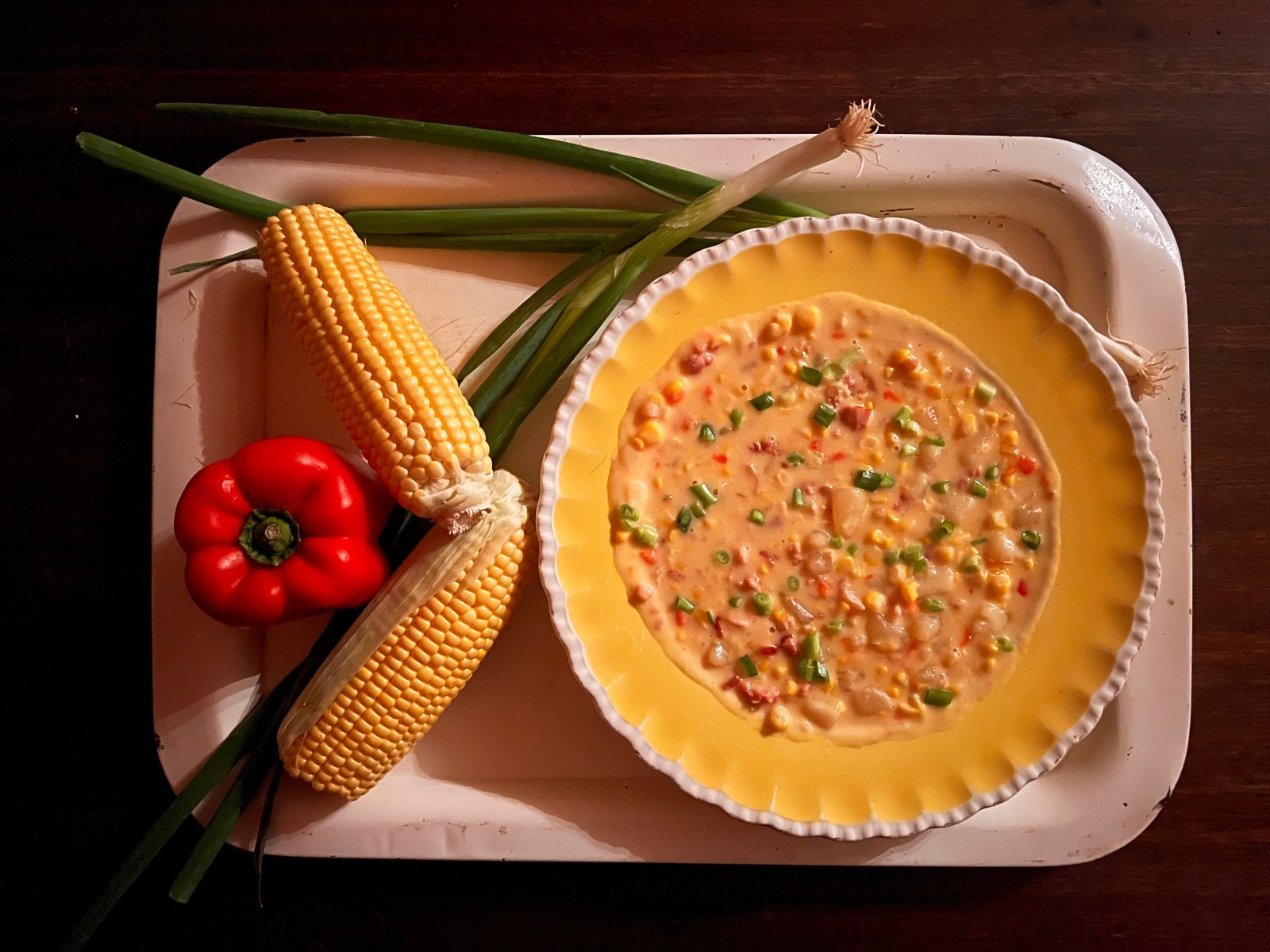 Sweetcorn and bacon are one of those matches that make you smile and ask for more. Combined in a chowder, they’re about as warming a dish as there is for a chilly early winter’s supper.

A chowder is a thick, chunky soup or, some would say, a stew. For me it’s the former, a hearty, moreish soup of which every delightful spoonful is packed with little chunky goodness. Traditionally it would be thickened with crushed savoury crackers or the biscuits sailors ate at sea in times gone by, a “ship biscuit”. A chowder contains salt pork or bacon, and is most often seafood (such as clam chowder) but sometimes chicken, often vegetable. One of the most beloved chowders is all about corn.

Chowders also contain diced potatoes and milk or cream (in my case, both) and, if you’re not being strictly traditional and trying to source a ship’s biscuit, can simply be thickened with a cornflour and milk roux.

Cut the kernels off each of six mielies/corn on the cob.

Melt the butter in a heavy soup pot and gently cook the chopped onion until softened and taking on some colour, then add the diced bacon and cook, stirring, for two minutes.

Add the diced peppers and continue cooking for three or four minutes, stirring.

Add the chicken stock, corn kernels and diced potatoes (they need to be very small dice, only a tiny bit bigger than the kernels of corn) as well as the milk and salt and white pepper, and bring to a boil, then immediately reduce it to a very gentle simmer, with the lid on. But you do need to remove the lid and stir now and then, putting the lid on again afterwards.

From this point on, only stir in slow motion, dragging the edge of a flat wooden spatula across the bottom of the pot to avoid it catching. This is to avoid the potatoes disintegrating; they need to be a visible and textural part of the chowder.

Cook in this gentle way until the potatoes are al dente in the way good cooked pasta is, almost tender but with a bit of “give”. Take a piece out with a teaspoon to test.

Add the cream, taste for seasoning (add more salt and pepper if needed), and bring it back to a simmer to cook for another few minutes, stirring with care.

Stir in the diluted cornflour and let it cook for several more minutes while it thickens, and finally stir in the grated Cheddar.