People queue at the Department of Labour in Cape Town in May 2020 to claim money from the Unemployment Insurance Fund (UIF). (Photo: Gallo Images / Nardus Engelbrecht)

The Unemployment Insurance Fund lost R1.8-billion in public money by indirectly investing it in Bounty Brands. Scorpio investigative journalist Pieter-Louis Myburgh explains how the money was lost and who might be to blame.

The Unemployment Insurance Fund (UIF) has lost an eye-watering R1.8-billion thanks to indirect investments in Bounty Brands. Two companies – Kefolile Consumer Brands and Bright Glacier Trading – had obtained money from the UIF and invested it in Bounty Brands. The latter nearly went bust and in the process the UIF and other stakeholders lost all their money.

How did it happen?

There was just too much debt in the group. Coast2Coast Capital, the equity firm behind Bounty Brands, defaulted on some of these debts. More and more creditors wanted their money back after Coast2Coast’s initial defaults. Facing possible liquidation, Bounty Brands instead took on yet more debt to settle the more imminent liabilities. In exchange for the new financing, which totalled more than R900-million, the new lenders got an 80% stake in Bounty Brands. To accommodate the new majority stake, the shares of those businesses the UIF had funded – along with other existing shareholders – were severely diluted. This effectively wiped out their and the UIF’s stakes.

Who are Bounty Brands?

Where does Gary Shayne fit in and why are many blaming him for the mess?

Gary Shayne and his private equity firm, Coast2Coast Capital, are being blamed for the mess because it was Coast2Coast entities that first defaulted on some of the debts incurred during the process of acquiring the businesses in the Bounty Brands stable. The initial defaults triggered a tsunami of demands for immediate repayment by a string of other creditors.

The plan was to acquire a collection of consumer goods businesses and bundle them all into one holding company, namely Bounty Brands. The idea was to then list Bounty Brands on the Johannesburg and London stock exchanges. This is called a build-and-list strategy, or a buy-and-build play. Steinhoff, which was a holding company for a collection of furniture businesses and other companies, followed the same strategy. But the reasons behind Steinhoff’s demise and Bounty Brands’ near-collapse differ. Steinhoff was a listed company. There had been accounting fraud at Steinhoff, which caused the share price to plummet. Bounty Brands, on the other hand, nearly drowned in a debt tsunami even before it was listed on the stock exchanges.

How did the UIF manage to get sucked into all of this?

The UIF’s money and investments are managed by the Public Investment Corporation (PIC). One could say that politics and alleged corruption played a role in the mess. Kefolile Consumer Brands, the first business through which the UIF bought its indirect stake in Bounty Brands, was owned by politically connected dealmaker Lawrence Mulaudzi. He also played a central role in the second UIF investment involving Bright Glacier Trading and Bounty Brands. After the PIC had invested the UIF’s money in Bright Glacier Trading – and after Bright Glacier had invested said monies in Bounty Brands – one of Mulaudzi’s companies got a R50-million “advisory” fee from Bounty Brands. Muluadzi’s company then paid R6-million towards a property deal involving then ANC treasurer-general Zweli Mkhize’s family trust. This strengthened long-held suspicions that Mkhize and others were using their political influence to extract alleged kickbacks from PIC deals. 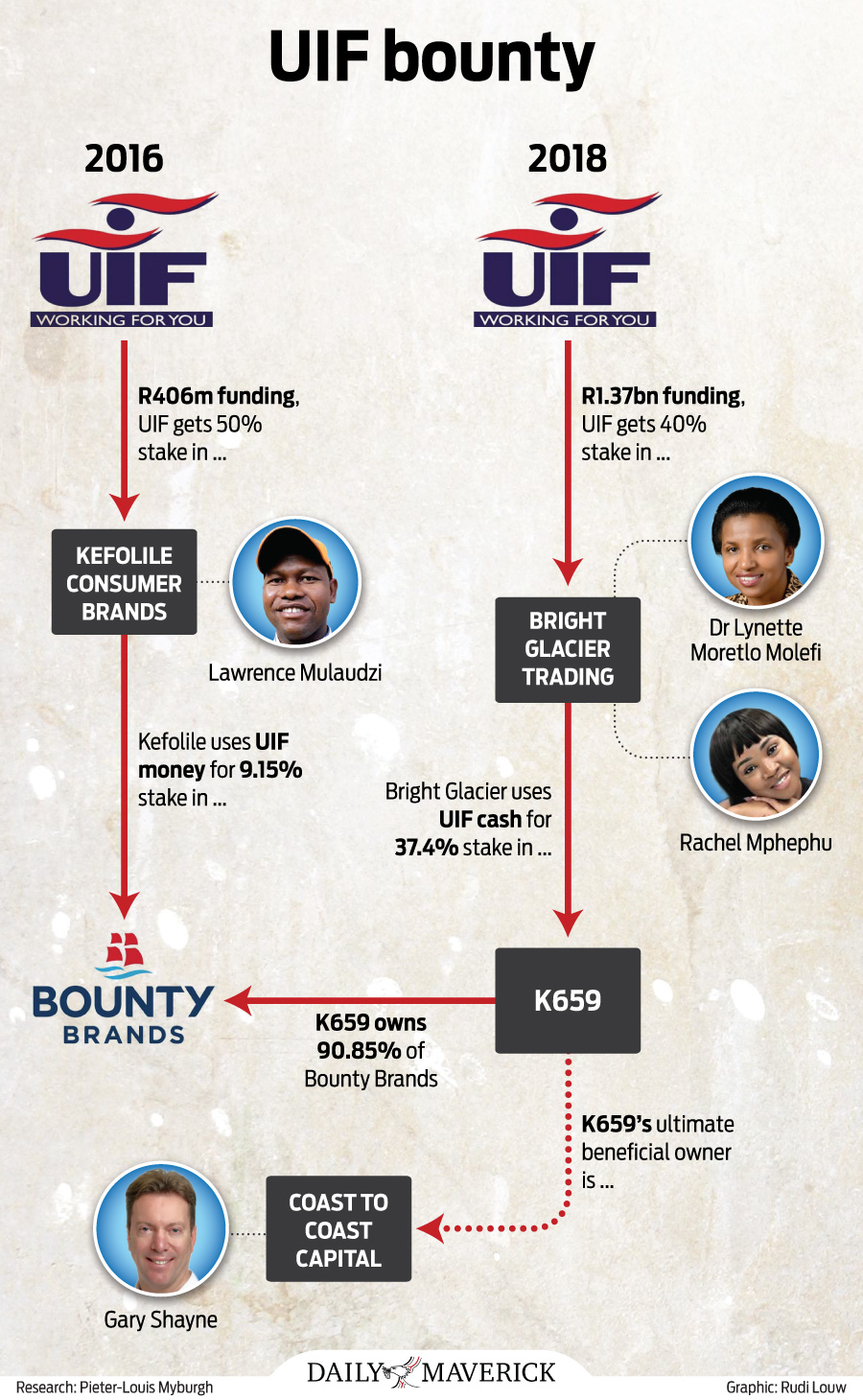 Any chance of getting the money back?

It is possible. There is an ongoing court case that might open the door for such recoveries. Bright Glacier Trading and Kefolile Consumer Brands are challenging the restructuring process through which the UIF’s indirect stakes in Bounty Brands had been so severely diluted. But it is a long shot. The court may very well rule that the restructuring was above board and that it had been necessary to save Bounty Brands from total collapse.

How do we know all of this?

Through documents filed in ongoing court proceedings, additional records provided to Scorpio, and information sourced during interviews with several individuals familiar with developments at Bounty Brands.

Why should you care?

The money in the UIF effectively belongs to all working South Africans and permanently employed foreigners. The fund is a crucial safety net since it gives short-term relief to workers when they become unemployed or are unable to work because of maternity, adoption and parental leave, or illness. DM