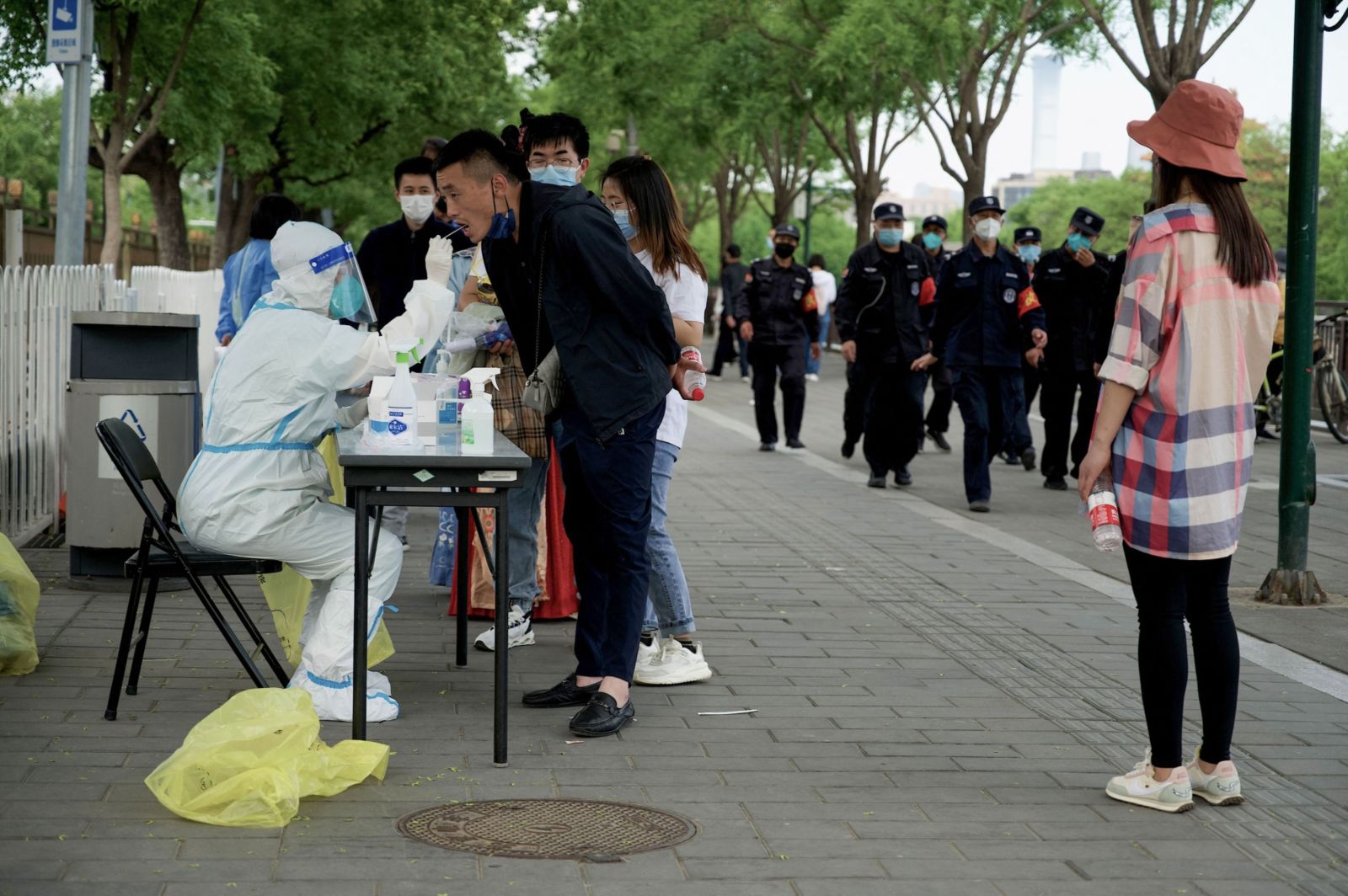 A man is tested for Covid-19 in Beijing on May 1. Photographer: Noel Celis/AFP/Getty Images

China’s capital is deploying an increasingly hardcore playbook to contain its nascent Covid-19 outbreak, from repeat testing of most residents to barring access to public places without a negative result as it seeks to avoid the chaos seen in Shanghai.

Beijing halted dining-in at restaurants for the duration of the May Day holiday, which runs until Wednesday, made entry into places like parks and monuments dependent on a negative Covid test and has shuttered gyms.

Authorities have also locked down apartment blocks – forcing some residents to stay in their units, not allowed out for groceries or exercise – and ordered another three rounds of mass testing to rein in an outbreak that added 62 new cases on Monday, according to the state-run CCTV, up from 41 on Sunday.

The financial hub’s experience is a cautionary tale for Beijing officials seeking to maintain China’s Covid Zero strategy, an approach that’s leaving the country increasingly isolated as the rest of the world opens up.

Read more: Xi in a Bind Over Who to Blame for Shanghai’s Covid Outbreak

Beijing has never been locked down at any time in the pandemic, and authorities are aware of the message it would send if the city was forced to curtail peoples’ movements. To avoid the fate of Shanghai – which has been locked down for more than a month now – officials are deploying tougher measures earlier. Residents of Beijing’s main districts have already undergone multiple rounds of mass testing, aimed at rooting out unknown chains of transmission and cases before they become symptomatic.

The escalating curbs have left destinations usually bustling with people during the holidays instead largely deserted. On the weekend, many people were turned away from parks after failing to produce a negative Covid test, having been given just one day’s notice of the need to do so.

Some restaurants set up tables in their doorways to serve takeaway food after dining in was banned. One coffee shop put stools outside to allow people to enjoy a drink under the shade of trees, only for police to later arrive to disperse the crowd.

The most common site was queues of people being swabbed for Covid tests as authorities mandate several rounds of testing for most of the capital’s 22 million residents. The city has recorded about 400 cases since the latest outbreak started less than two weeks ago.

A makeshift hospital that will be used to isolate mild Covid cases was reopened on Sunday, the state-run Global Times newspaper reported. As part of its strategy pioneered during its first Covid wave in Wuhan, China quarantines all infected people and their close contacts to quell transmission. While successful early on in the pandemic, it’s proven increasingly difficult to execute with bigger and more consistent virus waves driven by more contagious variants like omicron.

In Shanghai, 2,54 million people out a total population of about 25 million remained under the strictest form of lockdown by May 2, officials said at a briefing on Tuesday. The city will continue to mass test, using both PCR and rapid tests, through May 7.

While the spread of the virus is slowing, authorities remain cautious. There are 488 patients in severe condition in hospitals, and 88 people in critical condition. BM