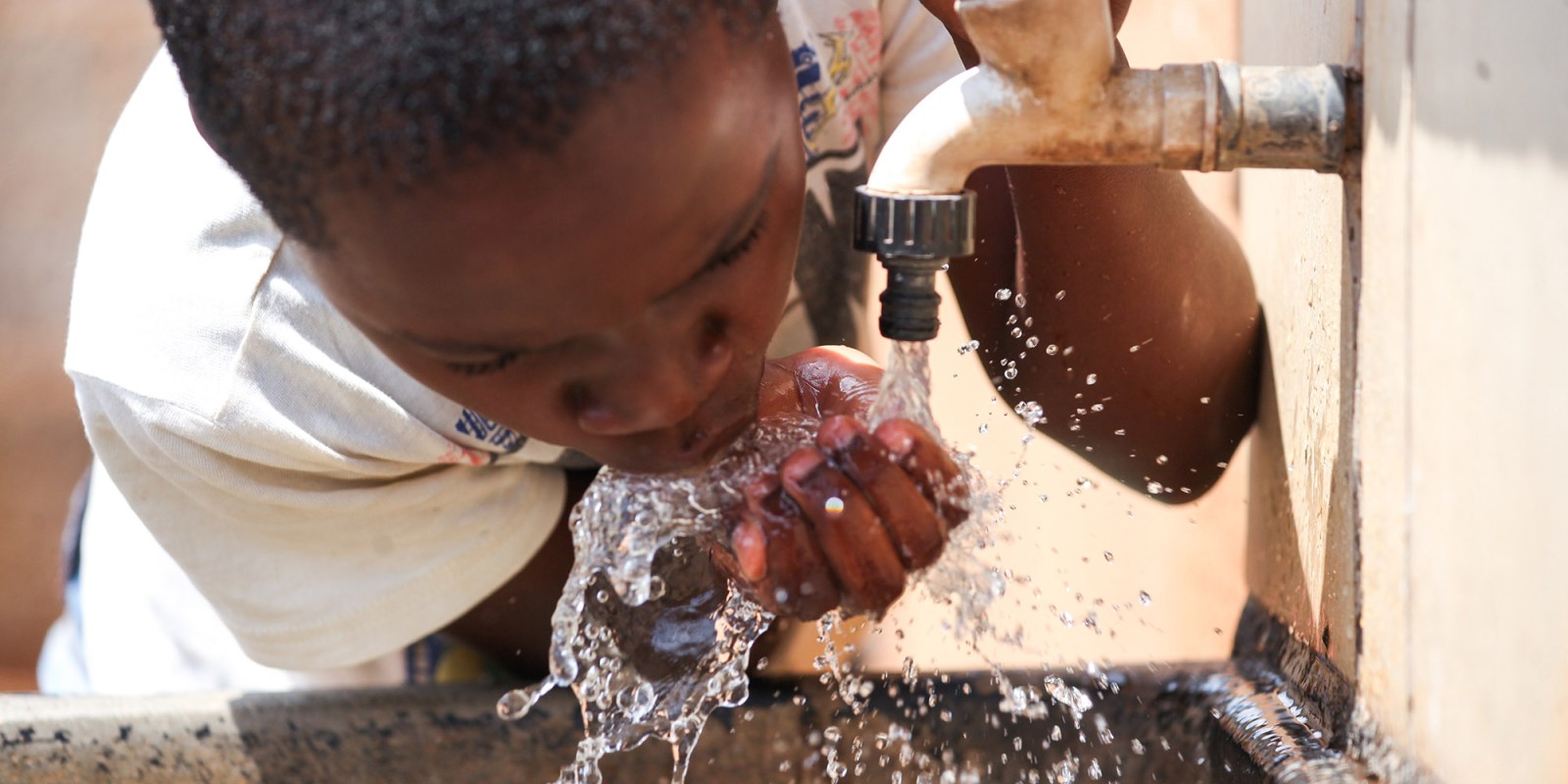 ‘You can’t keep running a car if you don’t look after it. It will break down and stop. The same is true for power stations or roads. If you don’t maintain it, the potholes get worse and the road breaks apart … Bang! Suddenly you hit the cliff and the entire asset collapses. I’m worried that our water supply systems in many parts of the country are heading in the same direction.’ – Neil Macleod, former head of Durban’s water and sanitation department.

Growing public concern about the safety of South Africa’s tap water has been largely confirmed by the government’s latest Blue Drop report, which reveals an alarming decline in water quality and management processes in several rural districts – as well as some of the country’s larger towns and cities.

Nearly a quarter (23%) of municipalities were ranked at “critical risk”.

Several municipalities across the country have been issued with “red notices” by the national Department of Water and Sanitation (DWS) and will have to warn residents to boil their water first if they want to drink it – because its safety can no longer be guaranteed.

While tap water in most major cities still appears to be safe to drink, the 2022 Blue Drop Progress Report nevertheless paints a picture of an overall decline in tap water safety procedures nationwide compared to previous similar assessments.

Put another way, 60% of systems did not comply with microbiological standards and 77% flunked the chemical treatment requirements.

The department says the microbiological tests include E. coli/faecal coliform bacteria, the presence of which is a strong indication of recent sewage or animal waste contamination.

Overall, less than half (48%) of the country’s water supply systems were judged to be “low risk” (a legal and desirable status) while the remainder failed or just scraped through the Blue Drop risk quality tests for excellence in water quality management.

Of these, nearly a quarter (23%) were ranked at “critical risk”; 11% at “high risk” and 18% at “medium risk”. The DWS has likened the critical risk category to a hospital Intensive Care Unit.

The national rankings are skewed to some extent by the poor performance of a large number of smaller, rural schemes which make up 62% of all the systems assessed. However, the report also red flags poor performance of water supply in some of the large centres.

One glaring example is the Msunduzi Local Municipality (Pietermaritzburg), the capital of KwaZulu-Natal.

And yet, just 50km up the road, the little town of Rosetta scored the best overall ranking in the country (10%), along with the small KZN dorpie of Charlestown which ranked at number two (11,7%).

In the Eastern Cape, the Makana (Grahamstown area) municipality scored a dismal 89% risk rating, while some supply systems in Port St Johns scored 95% and Mbizana boreholes 100%.

In the Free State, the Mangaung Metro Council scored similar dismal rankings ranging between 55% and 97% around Bloemfontein, with Warden, Vrede and Memel all above 95%.

In Gauteng (one of the best performers in the country), Pretoria and Johannesburg water supply both came in at an average 35% risk rating, with Emfuleni scoring an 87% high risk ranking.

In KZN, eThekwini (Durban) has a reasonably low risk rating of at 32% though some of its outlying borehole systems were in the critical zone of 99%.

In Mpumalanga, the provincial capital Mbombela had a 95% high-risk rating, though nearby White River and Hazy View were in low-risk category, with just above 20%.

North West had the worst overall risk ratings in the country with 53% of its water systems ranked at high risk and just 12% in the low risk category.

The Western Cape, along with Gauteng, performed best at a provincial level. Cape Town had a low risk rating of 26% with the Overstrand and Bitou ranked among the top 5 performers nationwide.

From a risk-based perspective, the Western Cape also had 13 of the top 20 water supply systems in the country.

“The large proportion of low-risk supply systems in Gauteng and the Western Cape is a positive trend which must be followed by the rest of the country to ensure effective risk management of water services provision for all citizens in the country,” the report states.

“For sustained failure, ‘Boil Water’ notices must be issued to safeguard consumers while the root cause of the failure is investigated and resolved. 77% of supply systems do not comply with chemical determinands. This may present immediate or potential long term health risks depending on whether non-compliance is for acute health determinands or chronic health determinands.”

Neil Macleod, a senior civil engineer and retired head of Durban’s water and sanitation department, noted that the latest Blue Drop report was not focused solely on water quality, but was concerned with the overall asset management and maintenance of water supply systems.

“What the report shows is that we are heading in the wrong direction. If you don’t have strong management and you are not collecting the money needed for proper water management you are heading for disaster. It’s a warning bell,” he said, noting that roughly 40% of municipal water supply nationwide was now classified as “non-revenue water”.

“What that means is that nearly 40% of treated water does not go through a meter because it has been stolen or is leaking out of pipes and reservoirs. So for every rand charged for providing water, municipalities only get 60 cents – or even less when you consider that some municipalities only collect 70%  of billed revenue.”

“That’s shocking … Imagine having a shop where 40% of the stock walks out the door and you only collect 70% of the price for the rest of the goods. Your shop would be finished.

“You can’t keep running a car if you don’t look after it. It will break down and stop. The same is true for power stations or roads. If you don’t maintain it, the potholes get worse and the road breaks apart … Bang! Suddenly you hit the cliff and the entire asset collapses. I’m worried that our water supply systems in many parts of the country are heading in the same direction,” said Macleod.

He was also concerned that the generally poor compliance with microbiological and chemical tests by smaller water suppliers indicated that tests were not being done often enough – or that water was not being tested by independent laboratories in order to save costs.

It was essential to test water quality entering homes on a frequent basis to ensure that it had not been contaminated by septic tanks or other potential sources of disease via leaking joints in municipal pipe networks.

Direct comparisons to previous Blue Drop reports are problematic as the 2022 version is a “progress report”, with a more detailed report to be published next year. Whereas previous reports have provided Blue Drop percentage scores, the latest report provides risk rating percentages (where the highest percentages correlate with the worst rather than the best performance).

The WaterCAN community action network believes that the latest report provides official confirmation of the widespread problems that many people have been facing for years and that there is no longer any excuse for the DWS failing to act against officials responsible for sub-standard water systems.

“While we welcome the publication of the Blue Drop Progress Report, the state of our drinking water quality is shocking. Municipalities are playing with people’s lives. Civil society must get organised in a national network to keep monitoring and testing our drinking water,” said Dr Ferrial Adam, the water and environment manager for WaterCAN.

“The DWS’s remedial actions such as ‘Boil Water’ notices and issuing of ‘Water Quality’ Advisories must not normalise poor quality water. These should be the exception but are fast becoming the norm as the water quality deteriorates across the country,” said Adam, adding that failed systems were a direct result of widespread corruption in the national DWS.

“The state of our drinking water should be raising red flags everywhere. It is time for DWS to fulfil its oversight function and assert its mandate under Section 151 of the National Water Act. This demands that DWS holds municipalities liable and municipal managers should be criminally charged, fined or imprisoned for their neglect.” DM/OBP