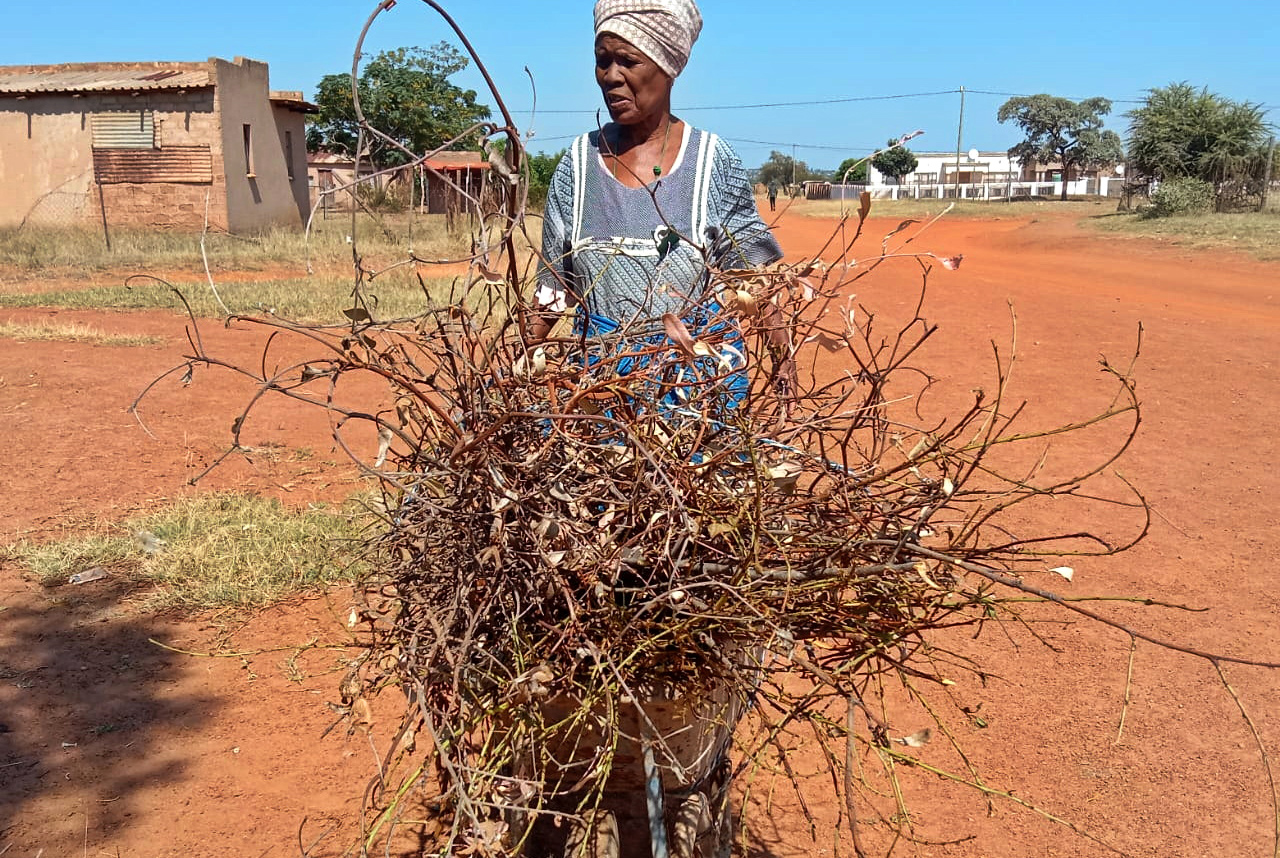 Maria Legong (80) walks about 10km daily to collect firewood in an effort to save electricity so she can cook for her grandchildren. Legong spends more than R300 a month on electricity. (Photo: Katlego Prudence Sekwati)

Rights groups have slammed Eskom’s 9.61% tariff hike, saying poor people can’t afford it. One of those people is pensioner Maria Legong, who worries about her safety while gathering firewood in the bush. The price increase means she doesn’t have a choice.

Eighty-year-old pensioner Maria Legong walks about 10km daily to collect firewood in an effort to beat the high cost of electricity. This follows the National Energy Regulator of South Africa’s approval of a 9.61% increase in Eskom’s standard tariff.

Legong, who looks after her grandchildren with a R2,000 old-age grant, spends more than R300 on electricity every month. This is taking a toll since she also has to feed her family.

The National Energy Regulator of South Africa (Nersa) approved the 9.61% increase, which took effect from 1 April. Civil society and social rights bodies have slammed the increase, saying many poor people would not be able to afford it.

Legong, of Allemansdrift, a settlement in the Dr JS Moroka Local Municipality in Mpumalanga, is among scores of frustrated residents who are furious about the tariff increase, since they are already spending a lot on electricity.

“This is too much to bear; this electricity is now too expensive. We used to buy R20 electricity, which lasted long, now R20 electricity lasts for a few days as it has 11 units. The government must do something about this problem because we cannot continue paying for the electricity that is expensive but not there when it is needed,” she said.

Another pensioner, Solomon Skhosana (60), also of Allemansdrift, spends more than R300 on electricity monthly. He helps residents by providing them with water which he sells for R2 per 25-litre bottle.

He has a borehole that uses an electric pump. He also uses the electricity to light his eight-room house, to cook and iron, and for the fridge which uses a lot of electricity because it is always on.

Allemansdrift is one of many rural settlements battling chronic water shortages.

“The electricity is very expensive, even the money I made from selling water does not make any difference. When you bought R100 electricity you got only 50 units, which means the other R50 is gone for nothing. I used to buy electricity for R100 and get 80 units. Now with the same amount you get 50 units. They now add R5 VAT; all in all you will be using R105 but the units do not increase,” said Skhosana.

“This is not the only problem; the power goes two times a day which results in harming our appliances. Eskom does not communicate with the residents when taking out the electricity. They must tell us so that we can be prepared,” he said.

The results of the Quarterly Labour Force Survey (QLFS) for the fourth quarter of 2021 show the number of employed people increased by 262,000 to 1.5 million, while the number of unemployed rose by 278,000 to 7.9 million, compared with the third quarter.

Malaki’s business uses electricity daily, and he spends about R500 on power every month.

“This issue of raising electricity will badly affect my business, meaning when the electricity goes up I must raise the prices, which will result in me losing my customers… I tried using gas but it is also expensive as I have to travel miles to refill it,” he said, adding that despite these challenges, he was able to change a life and employ one person.

President Cyril Ramaphosa has acknowledged the power supply crisis, saying it is one of the greatest threats to economic and social progress. As a result, several new energy generation projects would be coming online over the next few years.

In addition to the increase for standard tariff customers, Nersa said Eskom’s Retail Tariff and Structural Adjustment application was approved for an increase of 8.61% for municipalities, effective from 1 July 2022.

But this is cold comfort for Legong, who worries about her safety when collecting firewood on her long walk every day.

“I have to wake up early every day to collect wood for my grandchildren to eat and bath and it is not safe for a woman of my age to go to the bush. But I have to go as it breaks me to see my grandchildren bathing with cold water, as we also encounter a problem of the electricity going out two times a day. From five to seven in the morning and five to seven in the evening,” she said. DM/MC/Mukurukuru Media