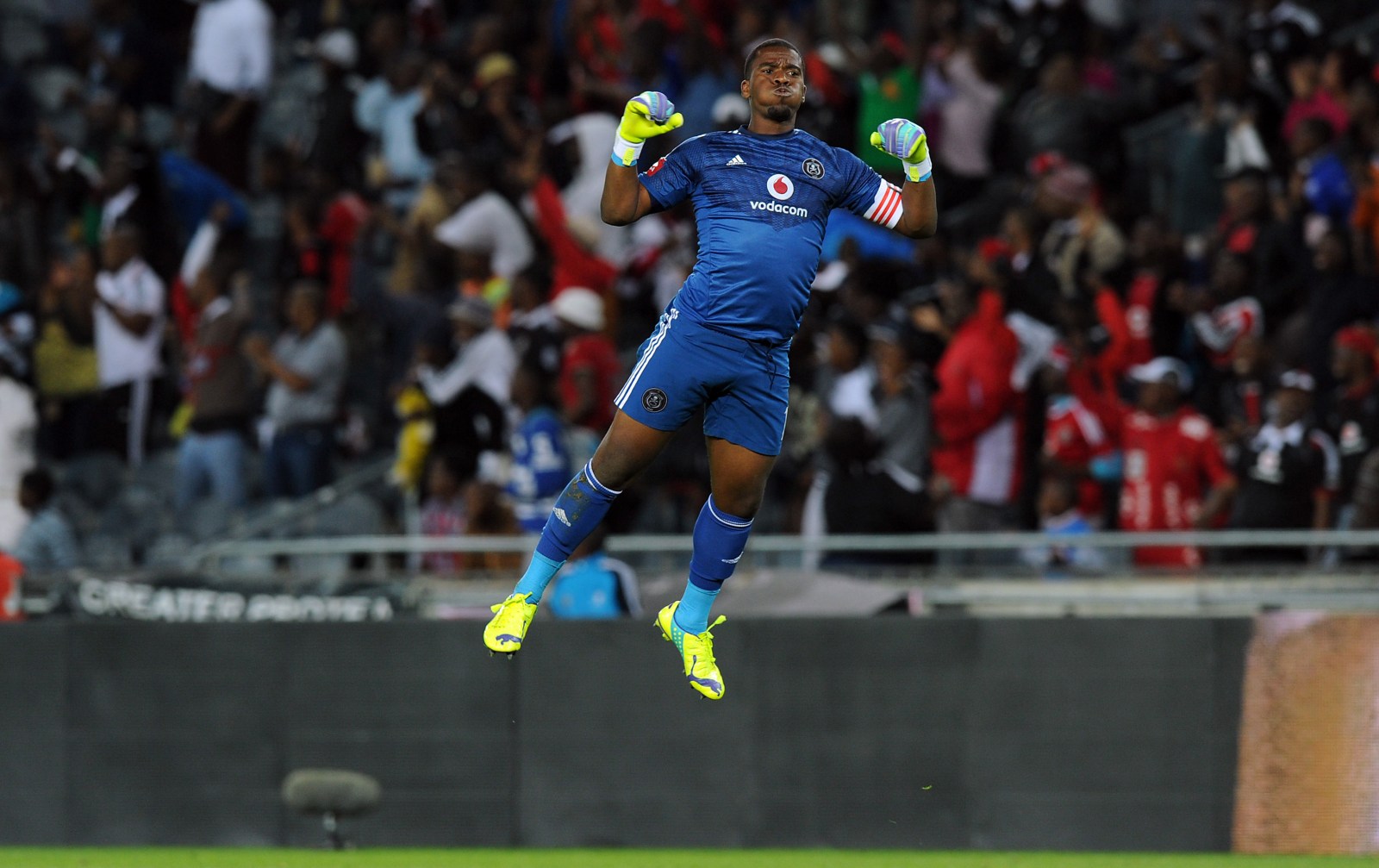 Senzo Meyiwa of Pirates celebrating their goal during the Absa Premiership match between Orlando Pirates and Free State Stars at Orlando Stadium on October 18, 2014 in Soweto, South Africa. (Photo by Gallo Images)

A new Netflix docuseries about the murder of the soccer star reveals the ineptitude of our country’s police system.

In October 2014, South African football fans were left devastated at the news of the Orlando Pirates and Bafana Bafana captain Senzo Meyiwa’s death. Eight years later, the court case got under way.

This week, Fisokuhle Ntuli, Muzikawukhulelwa Sibiya, Bongani Sandiso Ntanzi, Mthobisi Prince Mncube and Mthokoziseni Maphisa appeared in court on charges related to Meyiwa’s murder. The men are facing charges of murder, attempted murder, armed robbery, possession of firearms without a licence and the possession of ammunition.

The trial for Meyiwa’s murder was meant to start on 11 April but was postponed for a day to give Ntuli time to consult with his legal representative. On that day, it was reported that advocate Dan Teffo, who is representing Sibiya and Ntanzi, let slip that his clients confessed to killing Meyiwa. Judge Tshifhiwa Maumela shut Teffo down and said that the court wasn’t ready for that testimony yet.

Teffo, who also represents Maphisa and Mncube, is also holding a watching brief for Sifiso Meyiwa, Senzo’s brother. Sifiso and Maphisa’s sister, Sinqobile, don’t believe the five men on trial had anything to do with Meyiwa’s death.

About the five arrested men, Sifiso told City Press: “The people who are arrested aren’t involved. These policemen are trying to cover up for someone. They’re not interested in finding the truth. They know the truth. They just want to close this case. They’re protecting someone we know, but I won’t mention the name. We’ve got evidence of defeating the ends of justice. We know who shot my brother. That’s why we’re saying that those people aren’t the right suspects.”

On 12 April, the trial was again postponed to 22 April to allow Ntuli and his legal representative to consult and go over witness statements handed to them by the state two weeks ago owing to security reasons.

As the court case unfolds, Netflix viewers have been gripped by the new documentary, Senzo: Murder of a Soccer Star, which relies on archival footage of Meyiwa and recordings of the people present when he died, to piece together what happened that night.

Meyiwa was allegedly shot in the chest during a robbery in Vosloorus, where he was with his girlfriend, Kelly Khumalo, her sister, Zandie, Zandie’s boyfriend, Longwe Twala, and two of Meyiwa’s friends, Mthokoszisi Thwala and Tumelo Madlala. The group were at Khumalo’s mother’s house, who was present, as well as Khumalo’s two children, one of whom was Meyiwa’s child.

Months and even years after Meyiwa’s death, South Africans were trying to make sense of the night Meyiwa took his last breath.

Throughout the years the Khumalo sisters and Twala all did radio and TV interviews recounting what happened.

For those who have monitored the case, the documentary offered nothing new. The Khumalo sisters and Twala do not appear in the documentary. In lieu of this, footage and recordings from interviews were used.

In these interviews, they maintained their version of events that two intruders walked in, and Meyiwa tried to protect Kelly and was shot.

Of the people present during Meyiwa’s murder, only Madlala appears in the documentary. Madlala, who is still visibly distraught, doesn’t offer any new insight into what happened that night, either.

But the documentary also highlights the inconsistent storytelling by the people who were with Meyiwa that day. In a 2018 radio interview, Twala said he pushed past the gunmen and ran outside, but he couldn’t call the police because his phone was in the house. Then he later said he had his phone in his pocket.

These comments have led to Meyiwa’s fans speculating that the group were covering up Meyiwa’s murder. Although, to be fair, research has shown that witnessing something as traumatising as murder can shape how memories are formed. Writing on this, psychologist Fabiana Franco wrote that “in respect to memory, the parts of the brain involved in memory formation are shut down when faced with a traumatic experience. The activation of the fight or flight response prevents the parts of the brain responsible for creating and retrieving memory from functioning effectively.”

But none of that answers the most pressing questions: who killed Meyiwa? In a house full of valuables, why did they only steal one phone?

Meyiwa’s father, Sam, was known for publicly voicing his dissatisfaction with the investigation and pleading for his son’s killers to be brought to book. Sam passed away in 2019 after suffering a second stroke. Sam’s death came five years after his son’s death, which his family said he was still battling to deal with.

By the final episode, the heartbroken Meyiwa family had turned to the right-wing organisation AfriForum for legal assistance. Seeing the family’s grief and longing for answers, it becomes easy to see why the family turned to AfriForum for help. But more than anything, it’s a huge indictment on the policing system that a family has to go to such lengths to get justice.

When Meyiwa’s sister, Nomalanga, says “it’s been seven years; we’ve been surviving with an open wound”, that wound is palpable when Meyiwa’s mother, Irene, speaks about her son’s death.

As the case starts, Gerrie Nel, who heads AfriForum’s private prosecution unit, holds a watching brief on behalf of Irene as well as  Meyiwa’s sisters.

In 2018, @AdvoBarryRoux, a Twitter account that currently has about 1.5 million followers, tweeted what it believed to have happened that day. The Twitter account’s theory is that Twala and Meyiwa got into a fight and Twala shot Meyiwa. Twala, whose father is the iconic musician and producer Sello Chicco Twala, threatened the eyewitnesses if they spoke out.

In the midst of inconsistent storytelling, alleged police bribery and no arrests, it seemed that many Twitter users and even the journalists in the documentary were inclined to believe @AdvoBarryRoux’s theory.

At the end of the five-part docuseries, it seems the producers feel as perplexed by Meyiwa’s death as the viewers. The documentary is littered with theories that never get investigated.

The producers also seem to forget their role in probing statements made. When Soweto Mandlanzi, who wrote Meyiwa’s biography, said that the Meyiwa family liked Meyiwa’s friend Thwala “because he left”, it remains unclear what and where he left.

All in all, the documentary does what most local true crime shows do: reveal the ineptitude of our police system and show the countless grief-stricken families who are left behind. DM168