Hot cross buns, spicy and with a hint of citrus

Hot cross buns, spicy and with a hint of citrus 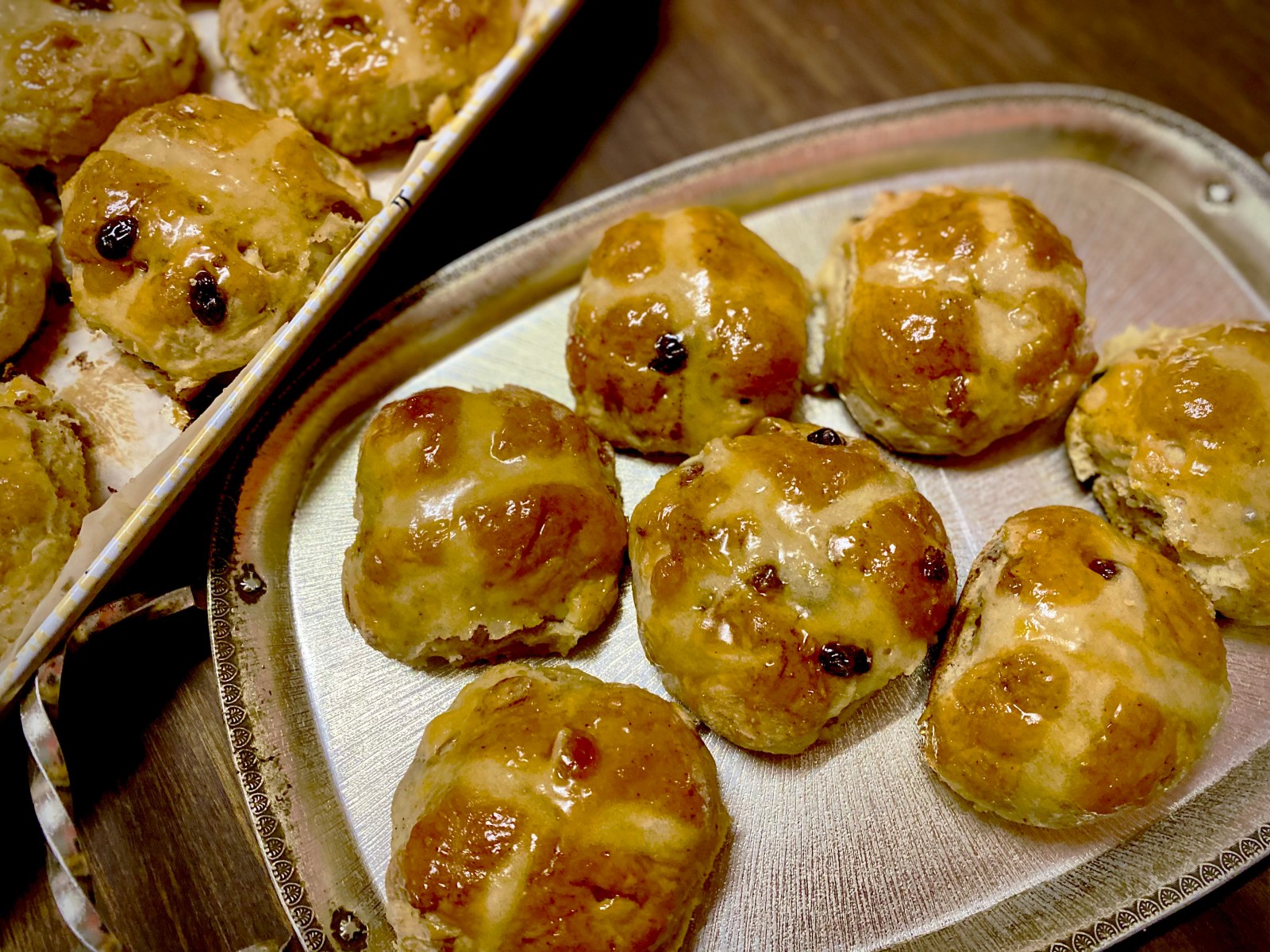 While we do think of cinnamon the second we think of a hot cross bun, a really good one will have an aroma of orange as well. For me, they also need the delicious little pop of a hot sultana or raisin in the mouth.

They’re not known at all in some countries. The French will look at you, uncomprehending, if you mention a hot cross bun. But in many regions, chiefly the Commonwealth or former Commonwealth nations, hot cross buns are devoured in the millions. And whether or not you’re a devotee of the Christian religion that inspired the sweet, spicy delights, once you’ve tasted one you’re unlikely to ignore that packet of six little round balls of doughy happiness, especially if they’re freshly baked and you can smell the spices in them.

Good Friday is the traditional day for eating hot cross buns, but we all know that, today, they’re eaten weeks in advance of that. They’ve been available in our shops for upwards of a month already, and you won’t convince me that they’re all being stored to splurge on next Friday. In our home, we eat them the entire weekend. The Friday tradition is to halve them, toast them, and then pile strawberry jam and fresh whipped cream on top. We call it “breakfast” and usually have seconds.

British recipes for hot cross buns are a tad tame in the spice department. One teaspoon of cinnamon, and that’s it, in many cases; the more daring ones gingerly add a touch of mixed spice, but not too much, we’re British. But down in Africa we’re made of stronger stuff, given our Spice Route history, so it makes perfect sense to beef up the spice component, and while we’re at it, the dried fruit as well. Oh, and the citrus.

I was gobsmacked at how well the buns rose, and there are no fewer than three rises, following Paul Hollywood’s advice. I included both golden sultanas and seeded raisins (he uses only sultanas), in equal measures, and in the spice department included nutmeg, cloves and a soupçon of mixed spice for luck. I did not use mixed dried peel, however, which most British recipes call for, for the simple reason that my local shops did not have any. However, for a good whack of citrus, I added the grated zest of both an orange and a lemon, which compensated perfectly.

Set aside an afternoon and let’s have a go…

Sift 500 g cake wheat flour into a baking bowl and stir in 1 tsp salt, 5 Tbsp castor sugar and 10 g of instant yeast. Give it a stir.

Make a well in the centre and pour in the milk/butter. Add a beaten egg and beat with a wooden spoon, then work it with your hands until you have a rather sloppy, slippery dough.

Flour a clean surface and knead the dough for five minutes with floured hands; it will come together and become more dough-like, less slippery, as you work. You’ll need to sprinkle a little flour on as you work; just gauge that using your common sense, and don’t get carried away with adding flour or your buns will be too dense. So to speak.

Put the oven on for five minutes then turn it off. Oil a clean bowl, put the dough in it, cover with a damp towel and put it in the slightly warmed oven to rise for 60 minutes. Or choose another warm place. There’s your first rise. It should double.

While it’s having its first rise, weigh the sultanas and raisins and put them in a bowl. Add to it the grated orange and lemon zest, the grated apple and the spices.

After the rise, remove it from the oven and add the above measured ingredients all at once. Work them thoroughly into the dough with your hands, then cover again with a damp towel and return to the turned-off oven (or other suitable warm place) for another hour.

It should now double in size, or even more. My batch “grew” massively.

After the second rise, flour a clean working surface and turn out the dough onto it. Line a large baking sheet (or two smaller ones) with greaseproof paper. Divide the dough into three equal pieces. Roll out each of those pieces with floured hands until you have a thick, even log. Measure out five pieces from each log and break them off, roll each into a ball, and place them on the lined pan with good space in between. I had rows of 3 buns x 5 rows = 15 buns.

To make the crosses, mix 5 Tbsp flour with about 4 Tbsp water. You want a thick paste and a piping bag. I fashioned one from a small freezer bag, cutting a small hole in one corner. Pipe it all the way down each row of buns in the middle from one end of the tray to the other, then all the way across, for every row. Make more if you run out.

They rose hugely during their cooking duration, which is 20 to 25 minutes depending on your oven. For my gas oven I set the heat to 240℃, but most electric ovens will be happy to bake them at 220℃. If they’re a tad too blond after the cooking time, give them a few more minutes.

Shortly before they’re cooked, melt apricot jam in a pot over a low heat, and whisk it to ensure it is all evenly melted. Brush this generously over the buns and return them to the oven for 5 minutes. Then brush them again (if there’s not enough jam, melt some more). This double glazing is what gives hot cross buns their beautiful shine. And shine you will when you serve them to your lovely people, and so will they. DM/TGIFood