Flood devastation in Durban’s shantytowns a savage in...

Flood devastation in Durban’s shantytowns an indictment of ANC ineptitude 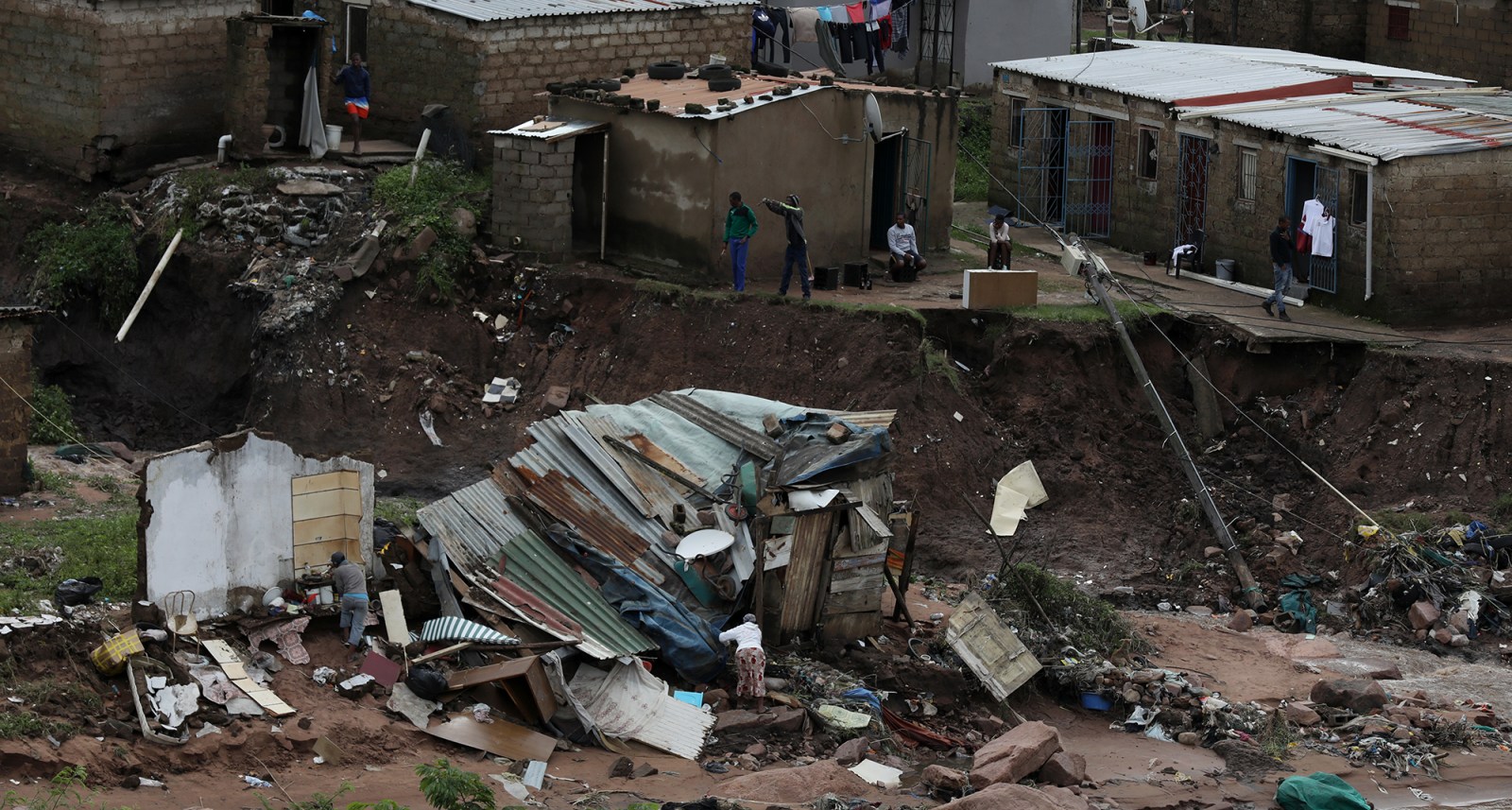 A family sifts through what remains of their shack after it was destroyed by floodwaters in Durban this week. (Photo: EPA-EFE / STR)

If the ANC had brought the same energy to resolving the housing crisis that it brought to running the World Cup in 2010, or enforcing the recent Covid lockdowns, we would not be in this terrible situation.

The vast shantytowns spread out across Durban have been devastated by the recent floods. People’s homes have been destroyed and their possessions lost. Many people have died. The death toll is still mounting and many people are still missing.

The scale of the disaster is staggering, and coming so soon after the July 2021 riots it has left the city, which has been in steep decline since Jacob Zuma’s supporters first took over the municipality, reeling.

The assumption that a huge percentage of the residents of a city like Durban can go on living in shacks year after year is a damning indictment of the city’s politicians, and of course national politicians too. The floods have made it very clear that shacks are not a safe form of habitation and the housing crisis should have been treated as a national emergency from the first day that the ANC took office in 1994.

If the ANC had brought the same energy to resolving the housing crisis that it brought to running the World Cup in 2010, or enforcing the recent Covid lockdowns, we would not be in this terrible situation.

Abahlali baseMjondolo, the more than 100,000-strong movement of shack dwellers, has branches across the city. It has campaigned for decent housing for close to 20 years and has lost more than 20 activists to assassinations and police killings in that time.

In the aftermath of the floods its leaders are all frenetically busy, but its visionary leader, S’bu Zikode, a man in the eye of the storm, was able to give me a few minutes of his time amid the frenzy of activity.

“What we are seeing is unimaginable,” he said. “It is unbearable when we have to witness people stuck under debris in a settlement like the one on Foreman Road. The media tells us that 59 people have been killed, but the numbers are far, far higher.”

Zikode also expressed his concern about the climate crisis, and the imperative to take action to stop the damage being done to the Earth by the system of capitalism that puts private profit above the public good.

Abahlali baseMjondolo has been a powerful voice in the city in the struggle against corruption and is bitterly opposed to the ANC’s RET faction in general and Zandile Gumede in particular. Zikode made the point that part of the reason for the severity of the damage suffered during the floods is “the lack of infrastructure upkeep as a result of all the looting in a municipality”.

He has a point. For many years, money that should have been invested in basic infrastructure has been looted by a parasitic political class in the name of “Radical Economic Transformation”. When disasters happen, the fragility of the city is suddenly laid bare for all to see.

Clearly, an important way to reduce the impact of future floods — which may become more common as the climate crisis worsens — is to ensure that people are provided with adequate housing, accompanied by well-maintained infrastructure, including drainage systems and so on.

However, this will be impossible without building a professional and non-corrupt civil service, something that is simply impossible under the RET faction of the ANC.

Zikode’s final point was to stress that Durban will not find a way out of its deepening crisis without popular democratic organisation on a mass scale. He said that many who see the movement that he leads as a threat to the established order should understand that its aim is to secure a dignified and safe life for all — “to minimise what we see today”.

He said the scenes of devastation across the city’s shacklands may finally lead some of the movement’s opponents to “be able to make sense of what we have always been confronting as poor people”.

It is a telling indictment of our society that millions of people have been left to languish in shacks, that Abahlali baseMjondolo has suffered such ruthless oppression, and that a man with the vision and personal integrity of Zikode is not directing operations from the city hall during this crisis.

Durban is in very serious trouble. Last year’s riots resulted in a large number of deaths, including terrible murders. When the riots stopped, there was a rapid middle-class flight out of the city. It is still peppered with the burnt-out remains of warehouses and other buildings torched during the riots. Now it has been ripped apart by the floods.

The situation seems almost hopeless. But there is a kernel of hope in the organising from below, led by Zikode, and the many better-off people who are rallying to support those whose lives have been wrecked by the floods. Something similar happened in the aftermath of the riots. If we could make these kinds of cross-class alliances permanent, perhaps hope would shine a lot brighter in this troubled city. DM

Dr Imraan Buccus is a senior research associate at ASRI.