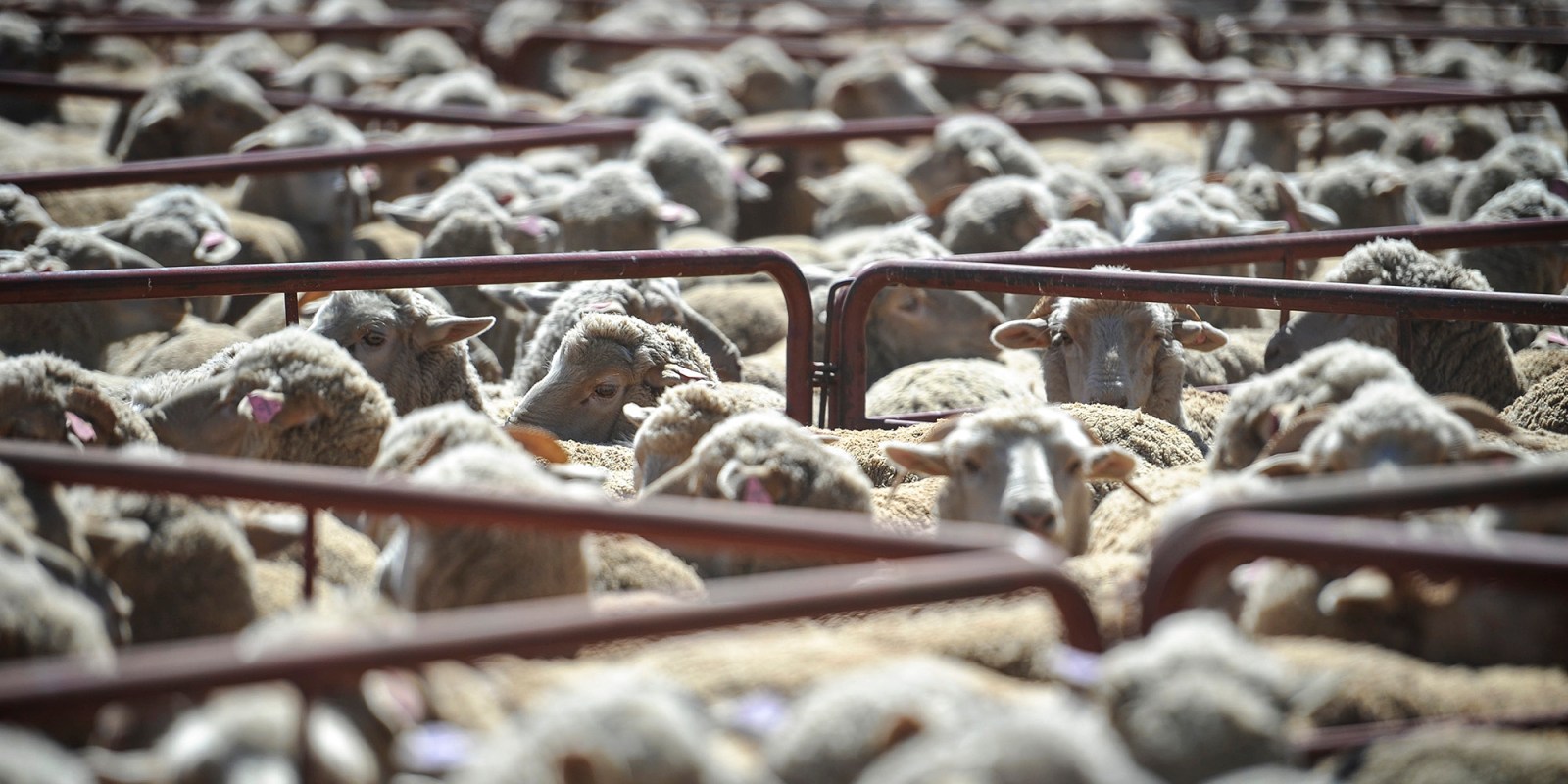 China has, as of 1 April 2022, announced a ban on the import from South Africa of all cloven-hoofed animals and their products due to the foot and mouth disease outbreak. (Photo: Gallo Images / Foto24 / Condrad Bornman)

Foot and mouth disease on farms and in communal areas in KwaZulu-Natal, Limpopo, the Free State, Gauteng and North West is spreading like wildfire. The department of agriculture, land reform and rural development said there were 56 ‘outbreak cases’ in these provinces.

Minister of Agriculture, Land Reform and Rural Development Thoko Didiza said there needed to be widespread cooperation between all relevant sectors if the foot and mouth disease (FMD) outbreak was to be contained.

“It is important that everyone commits to and respects all imposed control measures and collectively finds a sustainable solution,” said Didiza.

Cape Wool SA said in a press statement that China had, as of 1 April 2022, announced a ban on the import from South Africa of all cloven-hoofed animals and their products due to the outbreak.

“This has a massive impact on many industries in South Africa which export large volumes of product to China. Not least of which is the wool industry which, of the 45 million kilograms produced each year, exports approximately 80% of this annual wool clip in the form of greasy wool to China,” read the statement.

Didiza said the disease was spreading through the illegal movement of animals out of the foot and mouth disease controlled zones in Limpopo.

“Despite the fact that South Africa lost its World Organisation for Animal Health-recognised FMD free zone status in 2019, the permanent movement restrictions remain in place in the FMD protection zones in Limpopo and Mpumalanga… it is illegal to move cloven-hoofed animals and their products out of the FMD protection zone without permission from the state veterinary services,” she said.

“The damage caused by continued FMD outbreaks have a severe negative impact on the economy of the country, as well as on the individual animal owners.

“I am pleased that a 49-year old male was arrested at Masisi in the Vhembe District of Limpopo for bringing goats from the FMD controlled zone into the free zone and the law has taken its course.

“Another case, where animals were illegally moved from an FMD controlled area to auctions in two provinces, is being investigated.

“We warn perpetrators who are illegally moving animals that they will be prosecuted for contravention of the Animal Diseases Act,” she said.

Didiza said laboratory testing confirmed the outbreak of foot and mouth disease between Potchefstroom and Ventersdorp in North West.

“Disease investigations carried out by the North West veterinary services found that the FMD virus had spread to adjacent farms within a 10km radius.

“FMD-positive farms were also detected in Gauteng and the Free State through forward tracing from an auction near Potchefstroom which took place in March 2022, and from direct sales from infected farms before the infections were detected,” said Didiza.

She said there were seven farms linked to the current outbreak —  five in North West, one in Gauteng and one in the Free State.

“In Thulamela District, Limpopo, further FMD-infected dip tanks were identified in a previously FMD-free area to the north of the disease management area, which was declared in 2019. The affected area comprises communal grazing land. Further analysis confirmed that the same SAT3 virus is responsible for the outbreaks in the Free State, North West and Gauteng,” said Didiza.

She said in two separate incidents in April 2022, animals that originated from the vaccinated part of the foot and mouth disease protection zone in Limpopo were found at two auctions.

“These auctions were stopped and the premises were placed under quarantine. In KwaZulu-Natal, a further two FMD-positive dip tanks were found in the Big 5 Hlabisa Municipality and Jozini Municipality.

“A total of 43 dip tanks have become infected in this area since the disease was first detected in May 2021,” she said.

Didiza said all affected farms, dip tanks and other premises in the five stricken provinces were placed under quarantine and no cloven-hoofed animals were allowed to move from these locations.

“There has been no change in the movement restrictions on cloven-hoofed animals, their products and genetic material out of, into, within or through the disease management areas, which are still in effect in KwaZulu-Natal and Limpopo.

“The margins of the two disease management areas are being considered to include the newly affected areas and other areas at high risk owing to uncontrolled mingling of animals.

“Culling, like all control measures, will be considered on a case-by-case basis, taking into account the practicality, costs, advantages and disadvantages of each scenario,” she said.

She said the foot and mouth disease vaccination campaigns in Limpopo and KwaZulu-Natal are still ongoing in areas where there is active virus circulation and where the animals are not fenced in to effectively prevent co-mingling.

“However, the use of the FMD vaccine is strictly controlled by state veterinary services and the vaccine is not available for sale to the general public.

“The FMD vaccine can only be used in pre-authorised areas after the risks have been weighed. The department has become aware of companies advertising the sale of FMD vaccines and wishes to make it clear that the sale or use of such vaccines is illegal,” Didiza said.

Free State MEC for Agriculture and Rural Development, Thembeni Nxangisa, said he had alerted livestock and other farmers of an outbreak of foot and mouth disease in the province.

“This comes after investigations were done on three farms following a suspicion in movements of cattle from the North West and Gauteng provinces.

“The tests conducted on the two farms in Viljoenskroon have confirmed only one positive case. The other farm where samples were conducted tested negative. The farms have, however, been placed under quarantine.

“A third farm is being investigated in the town of Frankfort following the procurement of calves from a speculator in Randfontein,” he said.

“The importance of the South African wool industry cannot be overemphasised as it supports around 40,000 communal and 8,000 commercial farmers, their families and their dependents, as well as the farmworkers employed within the industry.

“Communal farmers in particular rely on the Chinese market for the sale of their wool,” said Cape Wool SA.

Cape Wool SA said the wool industry had already been through a Chinese export ban related to the initial foot and mouth disease outbreak in early 2019, which resulted in an eight-month ban of wool exports to that country.

“Exports could resume only once several new measures were implemented as required by China. These measures included registration of facilities to export to China and inactivation of the FMD virus as detailed by the World Organisation for Animal Health.

“Wool auctions have been postponed in the interim until more clarity can be obtained from the Chinese authorities on the duration and exact nature of the ban introduced in their announcement of 1 April,” read the statement. DM/OBP