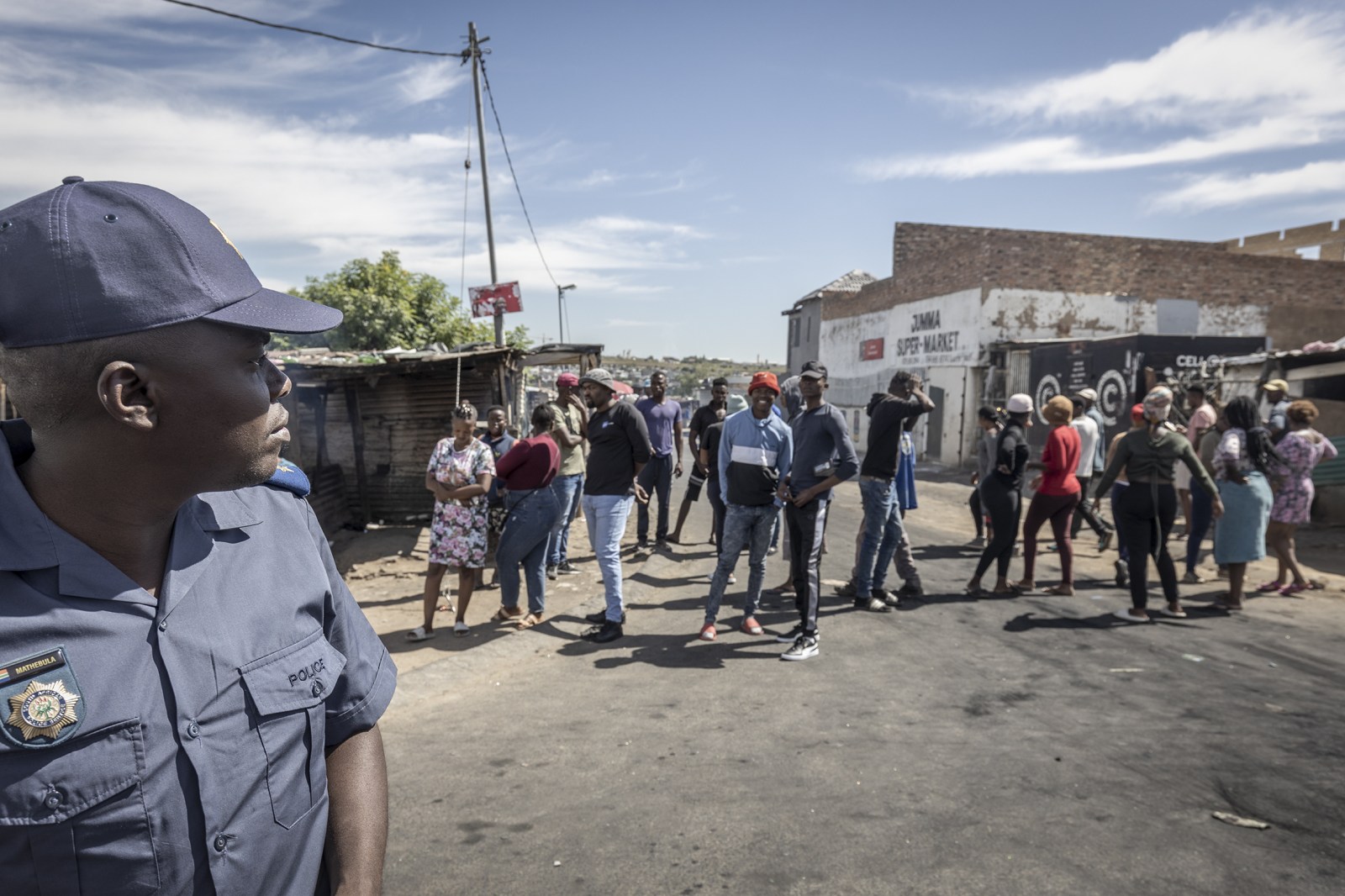 A policeman watches a group of people as police raid a shebeen (not in frame) in Diepsloot on 7 April 2022. (Photo: Shiraaz Mohamed)

Zimbabwean national Elvis Nyathi fell victim to the mob. His widow, Nomsa’s life was spared after she showed them her passport, but Nyathi was allegedly dragged out of his house, beaten, stoned and set alight in the next street.

Hundreds of Diepsloot, Gauteng, residents took to the streets on Wednesday, 6 April in a protest ignited by the murders of several people over the weekend, high crime rates and ineffective policing.

Police Minister Bheki Cele arrived in Diepsloot on Wednesday afternoon where he addressed the angry community. He announced the deployment of additional SAPS vehicles and members from the Tactical Response Team (TRT) and Public Order Policing as well as a team of detectives to deal with outstanding and cold cases.

Residents said his promises would again prove to be empty. They were later dispersed with rubber bullets and stun grenades.

It is alleged that after dark on Wednesday, a mob went around Section 1 knocking on doors and demanding to see the passports of suspected illegal immigrants.

Zimbabwean national Elvis Nyathi fell victim to the mob. His widow, Nomsa’s life was spared after she showed them her passport, but Nyathi was allegedly dragged out of his house, beaten, stoned and set alight in the next street.

A resident who lives metres from where Nyathi’s body was found, said: “I heard a lot of noise but I did not come out, because there were dangerous people. I heard people making a noise and fighting. When the police came they ran away.”

Nyathi’s brother Godknows said Nyathi, a father of four, “was not a criminal, he was working for his kids. They just killed him for no reason. He was a good man.

“I don’t feel safe here in Diepsloot. I don’t know what might happen to us now.”

A South African resident of Diepsloot, who did not want to give his name, said illegal foreigners were not the problem.

“The problem here is the tsotsis [criminals],” he said. “I am from Limpopo, I am South African. It is very dangerous living here in Diepsloot. They [criminals] knock on your door at night, saying: ‘Open, open.’ They beat me, they take my clothing, they say, ‘Where is your phone?’

“They take phones, they take money. If you don’t have money and he has a gun, he shoots and kills you. People say it’s foreigners but… it’s not foreigners… the problem is crime.”

On Thursday afternoon National Police Commissioner General Fannie Masemola was grilled by journalists. Cele stood close by, surrounded by members of the TRT.

“Can you assure South Africans and foreign nationals that the situation that we are seeing is not simply out of control?” asked a journalist.

Masemola replied: “The fact that there is somebody that died does not mean the situation is out of control. We have deployment in this area. There are police. We have made more than 24 arrests of undocumented people that are in the area.

Cele then addressed the media, saying: “We did not make promises, we made commitments. And we are honouring these commitments.” He referred to 16 brand new vehicles parked at Diepsloot Police Station: “It’s not just words any more.”

Cele admitted that the police had been slow in their response.

“Sixty-three members were on the ground last night. What maybe is not said very much, is that they came late here. Unfortunately, it was on the late side.”

Speaking about Nyathi’s death, he said: “We are having a team of detectives here who has put a top team to pursue this. But not only for this [Nyathi’s death], but for other cases that have taken place here in Diepsloot.”

Cele announced that a meeting would be held with the community the following day.

Another resident, who did not want to be named, said foreigners were welcome in Diepsloot.

“People are misleading other people to gain whatever they want to gain. But the thing is they are destroying us and they make the community fight each other. We love people, we are human beings. Whoever is a foreigner is welcome here. The problem here is crime.”

Police in the area remain on high alert. DM