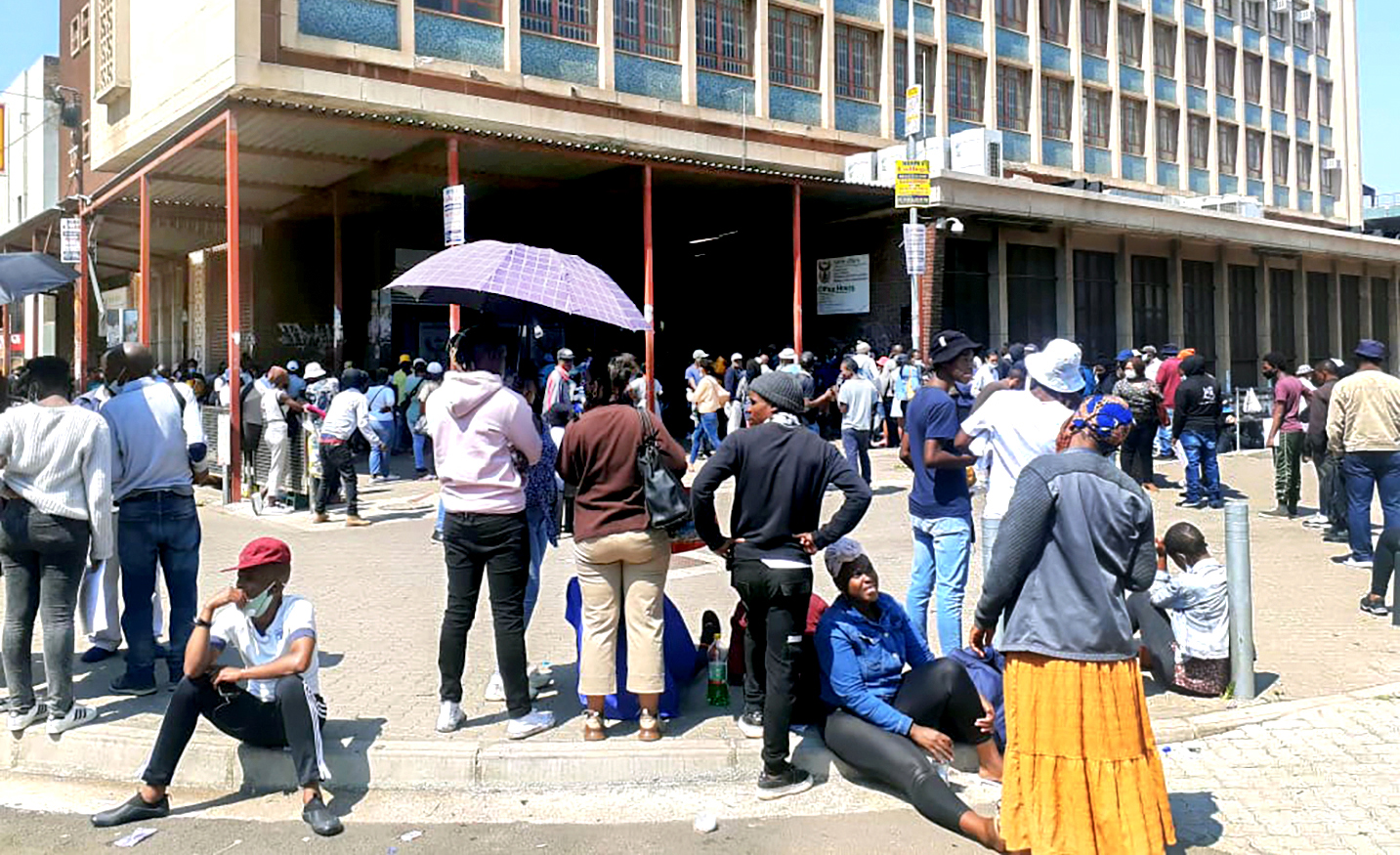 The queue outside the Home Affairs office in Harrison Street in central Johannesburg spills out on to the road in the baking sun. Some people start queuing at 3am. (Photo: Tshabalira Lebakeng)

Since the lockdown began asylum seekers and refugees have been denied crucial services by government.

Terrence is a Zimbabwean refugee in South Africa. He has tried seven times to renew his status through the Home Affairs online portal, but he has never received a response, he says.

His papers expired in October 2020, but Home Affairs announced that asylum seeker and refugee permits that expired after 15 March 2020 have been extended up to and including 30 April 2022. This was because Home Affairs had closed its refugee reception offices since lockdown.

Terrence wants to officially marry his customary law wife. So he went in person to the Regional Home Affairs office in central Johannesburg, only to be told by a supervisor to bring “a valid document” because his asylum document had expired.

He was told the blank extension is only to allow refugees to renew. “So I have to wait for the renewed status and then get married”.

But this is incorrect as the blanket extension clearly extends “the validity” of visas and permits.

“I do not understand how a Home Affairs office does not understand its own system … My wife is getting tired of waiting, not knowing if we will get married,” said Terrence.

He also said not having renewed documents in hand was affecting his employment contract and his child’s schooling.

Home Affairs launched its online renewal system for asylum seekers and refugees, but since its inception last year GroundUp has received emails and calls from asylum seekers experiencing difficulties with the portal.

With the closure of in-person services at Refugee Reception Offices it has also not been possible for many refugees and asylum seekers to legalise or document their status, even though they have entered the country perfectly legally.

Also, people who have lost their documents, because of anything from carelessness to robbery to fire, have no way currently to verify their status.

An Ethiopian refugee, Abera, says he cannot renew online since he lost his refugee document and he cannot remember his reference number.

Another distraught refugee told GroundUp that his bank insisted his refugee status be verified. “The documents are given by the South African government … Do banks verify South Africans green IDs as well? This segregation needs to stop.”

The “family joining” process — granting refugee status or a similar secure status to family members accompanying a recognised refugee — has also ground to a halt.

Children who have been born in South Africa to refugees are sitting without birth certificates, because their mothers are undocumented.

Sharon Ekambaram of Lawyers For Human Rights (LHR) also confirmed that refugees have been reporting a breakdown of Home Affairs systems. She said the failure by Home Affairs to issue a directive that the “document provided to asylum seekers that has the Covid watermark is a legitimate document, shows the contempt” Home Affairs has for poor people.

“Sassa officials punched holes in the documents that were renewed online to ensure they are not used again. They also threatened to arrest the refugees,” said Mohamed.

We have also repeatedly sent questions to Home Affairs but received no reply. DM