SA scientists have a duty to speak out on Ukraine invasion, and to support our beleaguered colleagues 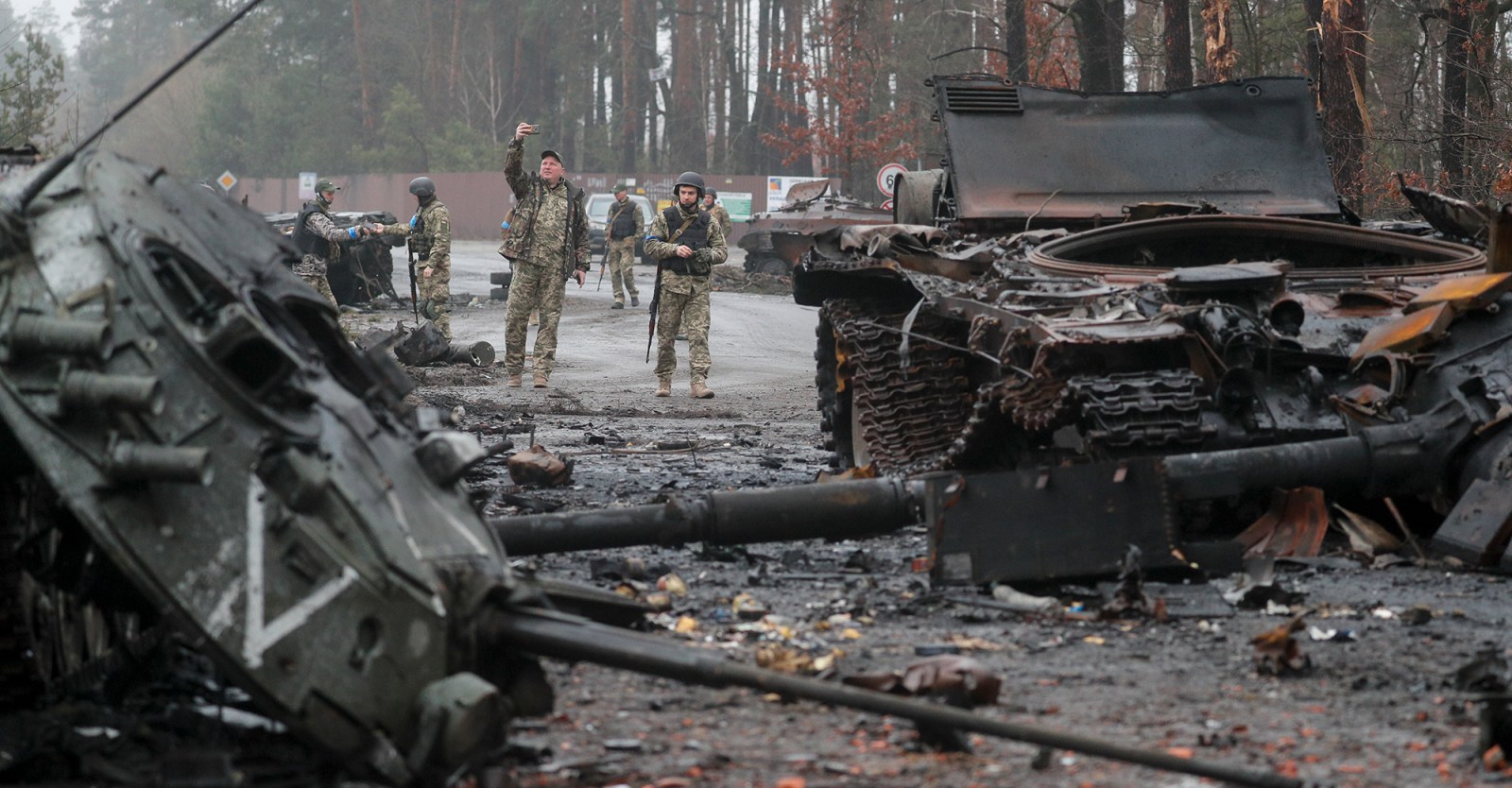 Ukrainian servicemen inspect destroyed Russian machinery after they retook the village of Dmitrivka near Kyiv on 2 April 2022. Ukrainian forces have recently regained control of the village and its surroundings amid the ongoing Russian invasion of Ukraine. (Photo: EPA-EFE / Sergey Dolzhenko)

As an academic body, we should be appalled by South Africa’s less than stellar performance on Russia’s war against Ukraine. Academics have an obligation to speak up, or else history will judge us harshly. The Academy of Science of South Africa has an important role to play.

As long as there are warlords, there will always be a need for weapons. Weapons are the product of science and have been since the beginning of time. With weapons development, basic science would have played a role at the outset: for example, the fission of uranium atoms was discovered, curiously, as it turns out, during their Christmas holiday in 1938 by two German scientists, but it didn’t take long for individuals to see the potential for creating nuclear weapons of mass destruction barely seven years later.

Much of weapons research is driven by governments in directed research programmes around the world, or by companies with a commercial interest, but with few ethical principles or consideration of the often existential threat that this poses to humanity.

But science also has an important unifying role to play in this world and it would be remiss of us not to recognise that, and make that role work better, especially in this time of war. However, an environment of free academic discourse needs to be nurtured for this to work properly and we need to give more attention to this. This intellectually free environment is not only important for our own self-interest as academics, but is essential for society too, and for democracies to work better.

Democracies need independent checks and balances to function successfully, or else we will spiral into dictatorships which can lead to discord and even to war. Expert scientists who know the potential impacts of their work need to be vigilant about nefarious applications of science and must speak out on matters of concern to society. As scientists, we must be concerned about the real danger posed by weapons and the welfare of our fellow scientists, including our students.

Scientists have the freedom, and I would say the responsibility, to express themselves on matters of relevance to society even if this is contrary to the views of the government. Our democracy should be robust enough to withstand criticism. The academic body must stand up for these freedoms the moment there is even a murmur of a threat to them, and here the Academy of Science of South Africa has an important role to play.

Science — and the principles by which we pursue science — is a universal endeavour. The amazing thing is that you can travel halfway around the world and, despite our political, cultural, geographic and linguistic differences, we still speak the same language of science. Science unites us. We should never shut down the channels for reasoned engagements across the many divisions in this world. Science builds understanding and friendships across our differences based on rational discourse; this should not be underestimated as a driver for peace.

And so, when we fail through political diplomacy to achieve peace, we must keep open the channels for scientific diplomacy. This worked well during the Cold War. We remember Andrei Sakharov, the Soviet nuclear physicist, dissident, Nobel laureate, and activist for disarmament, peace and human rights. It was because there was scientific cooperation across the Iron Curtain that we were eventually able to bring down that curtain. Reason triumphed in the end. Scientific cooperation played an important part in that, and we should recognise and applaud that.

Today we have an unnecessary and cruel war brought about by the ambitions of a singularly focused man with Russia’s invasion of Ukraine. This should be seen as an onslaught against the democratic principles that we so cherish in our own country. This should be roundly condemned, with the many other conflicts of war that are taking place in Africa, the Middle East and elsewhere.

However, South Africa, with 34 other countries, abstained in a non-binding vote at the UN a month ago to condemn Russia’s belligerence. This decision lacked moral courage on the part of our government. This has also created a lot of anxieties among our own academics and researchers concerning scientific cooperation with Russia and with Ukraine. We have well-established collaborations with both countries.

Of course, we understand that the government sets policy and will usually take expert academic inputs into consideration, but also other inputs that can loosely be referred to as political considerations. For example, South Africa is a member of BRICS, and many of our leaders sought refuge in Russia during our Struggle years. But Brazil voted in support of the UN resolution, and Ukraine also hosted many South Africans in exile.

Let’s make no mistake here, Ukraine is the victim under an unwarranted attack by its powerful neighbour. Millions are being displaced. Thousands have been killed. There is wanton destruction of property. Universities and other educational and cultural institutions are under attack. Scientists and students, including our own African students, are fleeing. There is potential for catastrophe if nuclear facilities are hit. The proud and rich intellectual heritage of that country is being obliterated.

We have the threat of nuclear war. That is not a regional problem, but a global problem and will break the more than 70-year moratorium that has been in place for exploding a nuclear device in anger. The environmental damage and the impact will be felt for many generations to come by all of humanity.

As an academic body, we should be appalled by South Africa’s less than stellar performance here. We, as academics, have an obligation to speak up, or else history will judge us harshly. I sometimes think that the only ethical and morally principled government that we’ve had is the one that we imagined during our Struggle years against apartheid, for we’ve hardly lived up to the expectations that we set ourselves for being a moral leader in this world.

We must condemn the Russian invasion, find ways in which we can reach out to the fleeing Ukrainian academics and, of course, reaffirm our democratic rights to express ourselves freely on any matter of concern to society, since questions have recently been raised in this regard.

The fleeing scholars need to be homed at regional institutions to continue with their productive work and to hopefully plan to return soon back to Ukraine to begin the arduous rebuilding effort. South Africa should support these efforts and explore ways in which we can host some Ukrainian academics at our institutions. That would be very symbolic. However, securing visas for Ukrainians to enter our country appears to be a problem, and this needs to be looked into.

Furthermore, we must keep open our channels for cooperation with Russian scientists and with Ukrainian scientists in the spirit of scientific diplomacy. We should be deeply concerned about the scientists and academics in Russia who are imprisoned for expressing their views, and very circumspect about supporting a government that does this to its people, and particularly to its scientists. Many Russian scientists have risked so much to express their concerns and we should not leave them out in the cold — so long as they are not contributing to the war effort, of course.

To close on a positive note: there has been such an outpouring of international support for Ukraine by ordinary men and women from around the world, including here in our country, that I think that Ukraine in the post-war era — and I long for when peace will descend there — will strive to be a beacon of hope, an international destination for democracy, peace and human rights. I long for that day. We should work toward this ideal. DM

Prof Nithaya Chetty is Dean of the Faculty of Science at the University of Witwatersrand. He writes in his personal capacity.