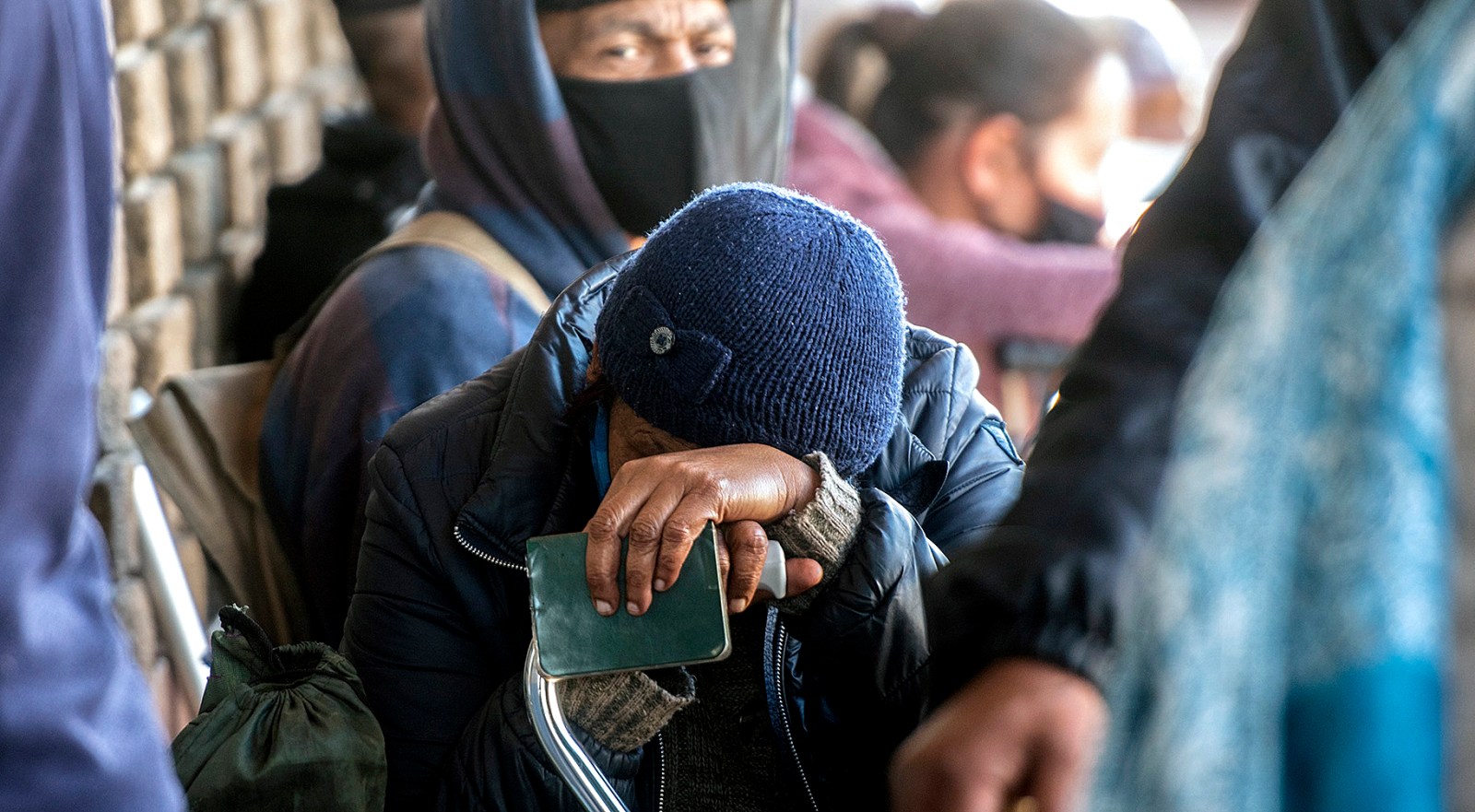 During the State of the Nation speech this year, President Cyril Ramaphosa announced that the government had extended the Covid-19 special Social Relief of Distress Grant for another year. The grant is now received by over 10 million people. But how far does R350 actually go to alleviate poverty and how are people making use of it? Tshabalira Lebakeng from the Homeless Writers Project went out to investigate.

I went out to ask people in Soweto how the R350 Social Relief of Distress Grant helps them. At Diepkloof I met people standing in a long line. On a sunny day, some were hungry, some were complaining about the post office not opening on time. Some of the people went there early in the morning at 3am because they wanted to be number one in the queue.

Some were complaining about why the post office told them to stand outside Diepkloof square. They feel offended; it’s like they are not important in the community because they are getting the R350 grant.

People celebrated when they heard that they will be paid every month. “It is the free money that needs only ID documents”, some are saying. Others are saying the ANC is giving free money for vote hunting.

But the main question is whether the money is enough or does the money meet their needs?

I went to a lady who was sitting down on the grass outside the mall wall, maMakhambule. She is 49 years old. She was putting her jacket on her head to protect herself from the hot morning sun. I asked her what time she came to the mall. She told me at 6:30am, she can’t come here earlier than that. I asked her how does the R350 grant help her?

“It’s helping me with nothing. Because it’s not reaching my needs. Ngane yami uyazi ngathi lemali izanamadimoni mawuqeda ukuyithola awuuuuu isihambile (My child, you know this money it’s like it’s coming with demons. Once you get it it’s long gone again. We come back and sit here).

“A small amount of sugar at the shop is R30. Maize meal 12.5kg is R100 and it depends on what brand you are eating. Now you can see this money it’s nothing. Sometimes I go crazy when I get to the shop. I don’t know if I will buy laundry soap or bath soap. Because I need them both but I don’t have money. Maybe the better grant it’s the one we get when we turn 60 years”, she said, referring to the Old Age Pension grant.

After maMakhambule, I talked to a young lady who is 20 years of age, Sindiswa. She told me she is studying at the University of Johannesburg. Some of her assignments are online. She’s got no luck with the National Student Financial Aid Scheme (NSFAS). So the R350 grant helps her with buying data for her phone.

“At PEP store 1G MTN of data it’s costly. It’s R100. So, my brother, you can do your own calculations. How much data do I need? 1G is nothing. Because I have lots of school work. My parents are not earning much. I normally see other kids taking their R350 to taverns and drinking it. But for me, I’m using it for my future.”

Also, she says she makes sure she doesn’t forget an ID copy. Because you have to have a copy to get paid. I told her that I thought it was only an ID that is needed. She told me “no, it’s not working like that here in Diepkloof. Everyone here has to have an ID copy. The post office officials told them it’s for stats. To know the number of people getting paid in a day or in that month.”

Tommy (not his real name) is a 25-year-old man. He was number two in the line. I asked him how the R350 grant helps him?

He started by laughing before he answered me. “(Ngamula yami) my boss you can see I’m a smoking man. With the R350 money I get myself a smoke. I pay people who lend me money to buy a smoke. I get myself bread and potato chips. I give my brother R50, after that the money it’s finished. I will wait for next month.”

I asked him how much is ‘a smoke’. He told me it’s R20. So he smokes five times a day which is R100 a day. He told me that the smokes cost him a lot of money. His wish is that the president can add something on top. Maybe R100. When he says that, his friends supported his statements. He told me “South Africa it’s the only country that gives people free money. So the government won’t hesitate to add more”.

I met two gentlemen who were drinking two beers from a plastic bag. I asked them about how the R350 money helps them. They said the money helps them with food. “We contribute R100 each to buy beers. The rest of the money we buy food. But because we are here in this long line we went to a tavern — we loaned two litres of beer. We will pay when we are getting our money. We can’t stand here in the hot sun without drinking. But we are hiding our ‘sleeves’ from the post office officials.”

I asked them why they were hiding, as it is their money they are claiming. They told me if post office officials find them drinking “they send us back home with empty pockets with no pay. Because we are drunk and nagging other honest people.”

I asked them how much food they were buying.

“My brother, we are not kids. We are not eating time and again. If we have meat and maize meal we are fine. We have to leave a beer space in our stomach.”

I asked them where they get food and beer money when the R350 is finished? They told me they collect scraps and sell them. Also as long they have ID copies for next month to get paid again, then all is well.

I went to ask at the post office about the challenges and the ID copy story. I had no luck. They told me they don’t talk to journalists. There are rules and conditions to be followed. The security guard said “each house has its own rules”.

A young man around the age of 25 approached me and told me the post office didn’t give him his money because when officials were stamping other people’s ID copies he was away to make his own ID copy. When he came back from the internet shop the officials were done stamping.

I asked him what he will do now. With sorry eyes he told me he will try the Orlando post office. Maybe, by luck, he will get something. I asked him how the R350 money helps him. He told me it helps his family a lot with electricity and food. He told me that his sister is getting R350. So they combine their money to buy food and electricity.

My question was, where is Ubuntu and remorse for other people? Picking up a stamp and stamping a document takes less than 60 seconds. DM/MC