Judicial mindset must change in line with the Constitution to realise social and economic transformation: Mlambo 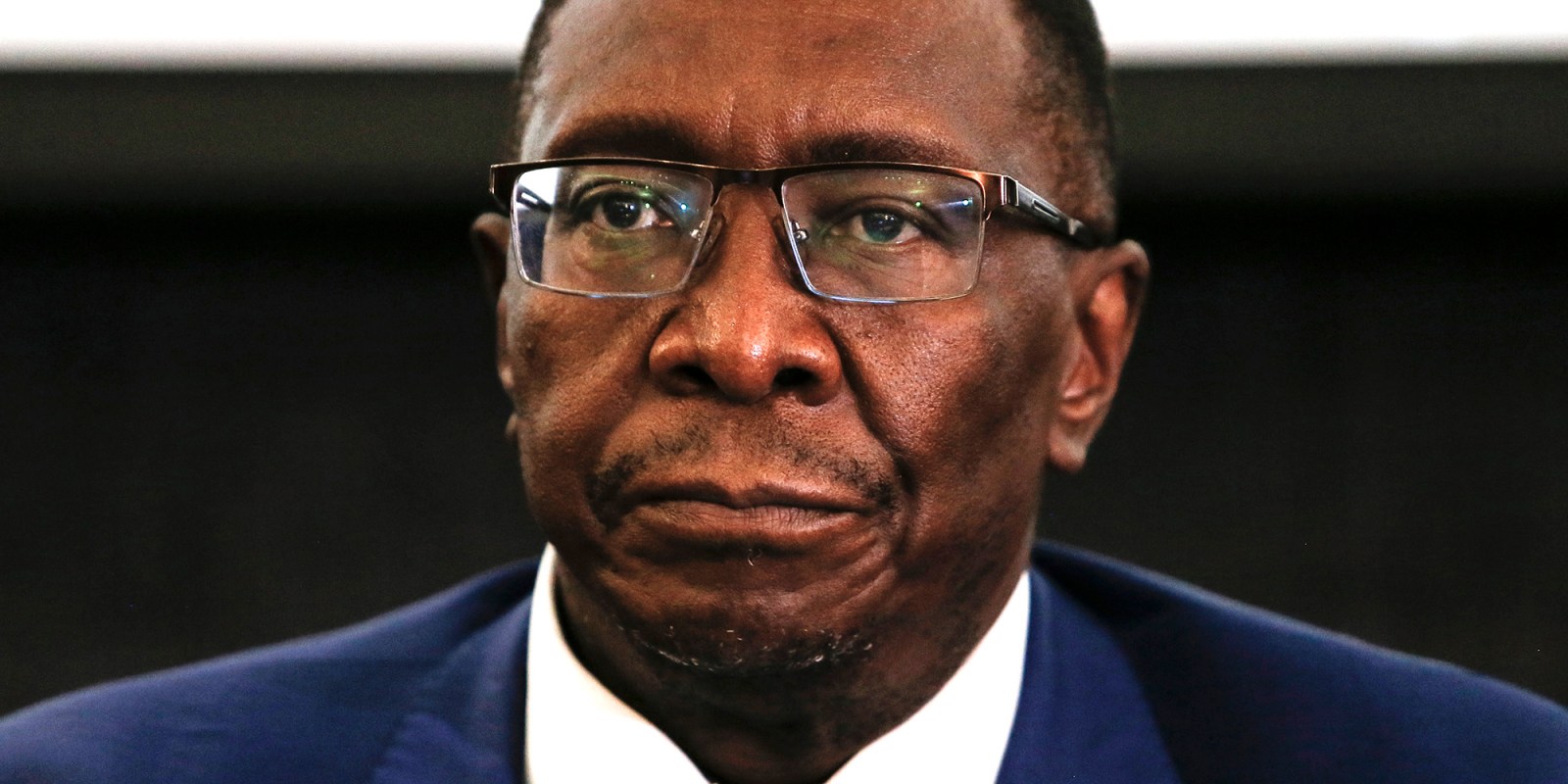 Judge President of the Gauteng Division of the High Court Dunstan Mlambo at the interviews for Chief Justice in Sandton on 3 February 2022. (Photo: Gallo Images / Daily Maverick / Felix Dlangamandla)

The judiciary needs to navigate some of the stumbling blocks to the transformative project, including systemic and entrenched inequalities, weak public institutions, a divided society, corruption and inequalities in accessing justice, according to North Gauteng Judge President Dunstan Mlambo.

Delivering the 16th Annual Human Rights Lecture on “transformative societal change and the role of a judge in post-apartheid South Africa”, at Stellenbosch University on Thursday, Judge President of the Gauteng Division of the High Court Dunstan Mlambo homed in on “transformative constitutionalism and why it necessarily requires in the judiciary where I come from [to] transform legal culture and judicial mindset in line with constitutional dictates”.

“And then I want to reflect on how judges in South Africa have performed in fulfilling the spirit and objects of the Constitution.”

Mlambo is known for landmark judgments such as the granting of media access to the Oscar Pistorius case; his ruling that failing to arrest former president of Sudan and accused war criminal Omar al-Bashir when he was in South Africa was unconstitutional; and setting aside Jacob Zuma’s appeal to review former public protector Thuli Madonsela’s recommendations on State Capture. He was also recently shortlisted for the position of Chief Justice.

“It has been emphasised many times that our Constitution embraces an aspiration and an intention to realise in South Africa a democratic, egalitarian society committed to social justice and self-realisation opportunities for everyone,” he told attendees.

While judges must be mindful that the legislature has superior competence to make law, they must not shy from developing common law because they are both bound by the Constitution to fulfil its vision, Mlambo said.

The Constitution also mandated “judge-made law” which directs judges to develop new methods for adjudicating and coming up with new criteria to deal with common law questions as purported by the Bill of Rights for a just, democratic and egalitarian social order.

“There are no longer assertions that the law can be kept isolated from politics; while they are not the same they are necessarily and inherently linked,” he said, quoting former chief justice Pius Langa.

South Africa’s legal practice, and to a certain extent the judiciary, was conservative and the most difficult to transform, owing to its apartheid past which was too formal and draconian, which was evidenced by a reluctance of the courts to develop common law in line with constitutional law. Mlambo did, however, concede that this reluctance was waning – there was “residual deference to common law which will be turned around in the fullness of time. I hope so.”

Another constraint was the “diverse background” from which the Bench draws. “Our own lived experiences have a huge bearing on how we process legal issues, hence the importance of constitutional conscientisation through judicial discussion forums.” This would go a long way towards dismantling the conservative legal mindset.

The penchant for looking at new issues through the “prism” of common law needed to change to looking at cases through a constitutional prism.

“I must ask how South African courts and judges have performed, having said this? Have we fully embraced the duty implicit in Section 39(2) especially at the high court level?”

The case in which the minister of safety and security was sued by Alix Carmichele for failing to provide protection from a man who had recently been released on rape charges and had then assaulted her, was a watershed moment because “it had an enormous impact in the context of protective duties of the state, as the case confirmed that state actors had a positive obligation to protect people from violence”.

However, the courts had been slow to change other aspects of common law, such as fairness in contracts, seen in many Supreme Court of Appeal cases “which reflect a firm reluctance to develop the law of contract  in line with the Constitution”.

Although, Mlambo noted, more recently there was a positive development in the case of Beadica 231 CC, in which the court used the opportunity to develop the common law. He emphasised that “constitutional values should be used creatively by courts to develop new constitutionally infused common law doctrines”.

Asking what judges should be doing more of to embrace the Constitution’s transformation agenda, Mlambo proffered that Professor Sandra Liebenberg and others had posited that courts and judges would need to engage with normative values that the Constitution seeks to achieve and  abandon traditional and formalistic approaches to legal interpretation and rigid understandings of the separation of powers. He had no “quibble” with Liebenberg on this, highlighting that the judiciary is not superior to the other arms of government.

“In the context of socioeconomic rights law, Liebenberg has argued that courts must offer a substantive interpretation of the right in question not only to develop the content and values of socioeconomic rights themselves, but also in relation to how they are connected to other flights in the Constitution. I agree with this. For example, with reference to the Grootboom judgment, Liebenberg commended the court for recognising that the right to housing is more than brick and mortar – that’s very, very profound, establishing the interconnectedness of socioeconomic rights and that the state is obliged to take positive action to vindicate these rights.”

Mlambo emphasised that what lay at the heart of legal interpretation were the constitutional values of dignity, equality and freedom. “As a judiciary we need to navigate some of the stumbling blocks that hold back our appetite to advance the transformative project – systemic and entrenched inequalities. You just have to drive out to the N2 and you’ll see what I’m talking about… weak public institutions, a society that remains divided, corruption and inequalities in accessing justice.”

Drawing attention to how the current sociopolitical context affects the work of judges, Mlambo said the leader of a division of the high court continues to deal with sensitive political and separation-of-power issues, which has given rise to “politically antagonistic themes” that suggest the Constitution is a failure and that it has not resulted in better living conditions for the masses, that judges and the courts are a “juristocracy”, that they infringe on the socioeconomic rights of the masses, that they have become too powerful and that South Africa would be better off under parliamentary supremacy. These themes were championed by the executive members of Parliament and party political members.

“I cannot stand here and deny that there are fault lines on a number of fronts, be it service delivery or worrying levels of corruption, especially in state departments and entities,” Mlambo added, saying recently elected Constitutional Court judge Jody Kollapen had pointed out that the Constitution remains far on the horizon for the masses.

The courts had seen unprecedented levels of litigation holding the state accountable for service delivery. The diagnostic report by the Planning Commission had listed nine key failings of the Constitution’s transformative agenda, but the courts and judges had not been listed among those failings.

Mlambo also reminded attendees that the courts were not a dominant player during the Constitutional Assembly’s deliberations about the country’s Constitution. During those engagements it was the ANC’s submission that “the supremacy of the Constitution should not be a system against the state, but it should be a system for the the democratic state to guard against the state degenerating into anarchy, arbitrariness and illegality without a framework of rules. Such a state would undermine democracy and democratic practices.”

As one of the arms of government it was therefore “counterproductive” to find blame in what the courts are mandated to do by the Constitution, Mlambo said. All the courts had done was seek to ensure the government’s policies were aligned with the Constitution and when found to be wanting, sent them back for improvement. However, he cautioned that the country could not rely solely on litigation to solve its problems, and emphasised the importance of maintaining a functional separation of powers.

“As we observe Human Rights Day, we should all realise that political hostility towards the courts and judges will in time delegitimise the courts and that will sound the death knell to our constitutional transformative project as a nation,” he concluded. DM/MC