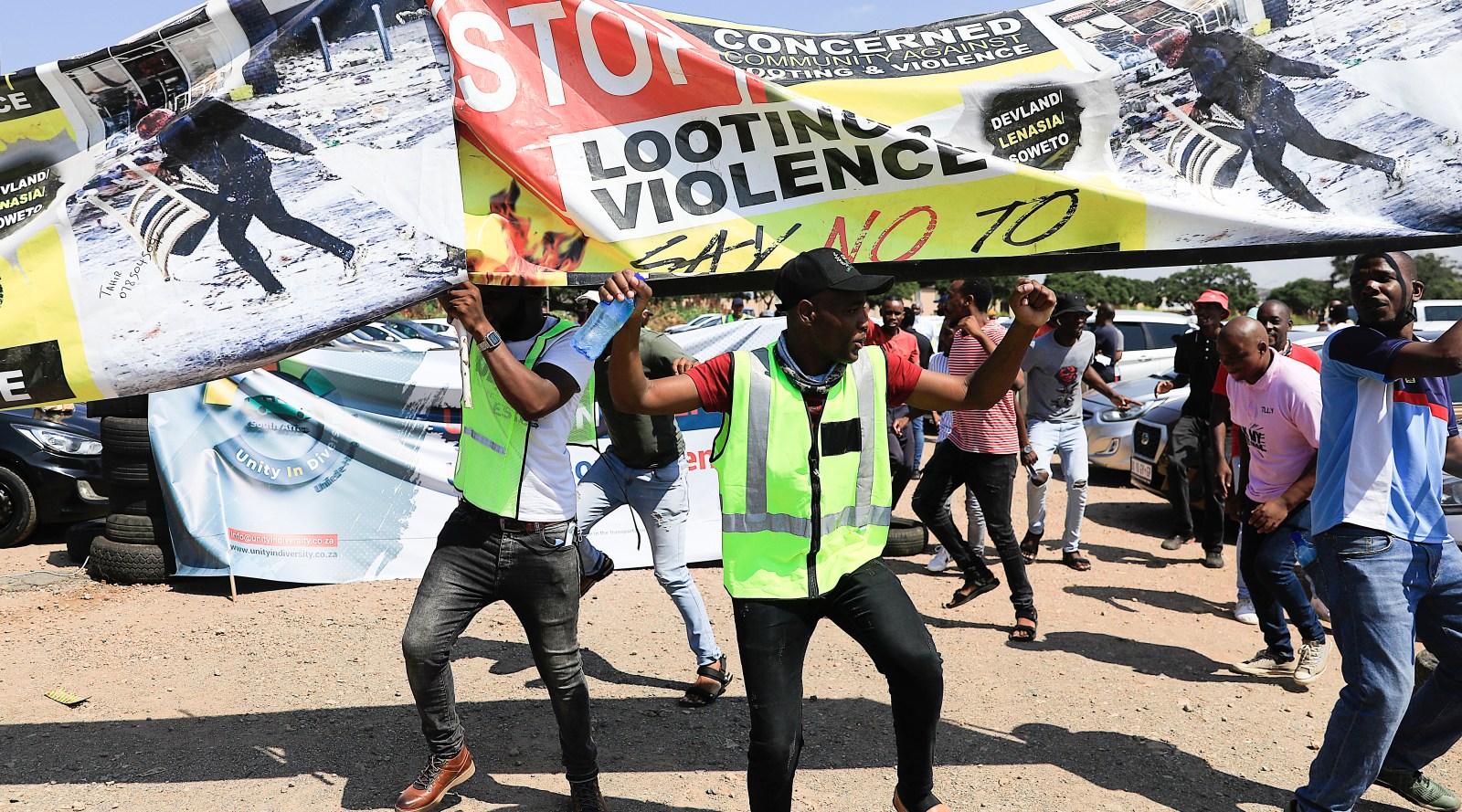 E-hailing drivers during a protest in Marabastad, Pretoria, on 22 March 2022. (Photo: Supplied)

Disgruntled drivers and owners from Uber, Bolt, Didi and Indrive in Johannesburg and Durban began a three-day mass protest and strike by switching off their apps in their respective provinces.

A protest by e-hailing taxi drivers from Uber, Bolt, Didi and Indrive kicked off in Johannesburg and Durban on Tuesday. Some e-hailing driver-partners, drivers and operators of e-hailing vehicles in their respective cities have closed off their apps and blocked some of the main routes prescribed by the Metro Police department.

When asked why they are protesting, Melithemba Mnguni, a protester and convener of Unity in Diversity (UID) — the body representing e-hailing driver-partners, owners and drivers — told Daily Maverick:

“We are against exploitation and uneconomic prices that are imposed on us by app companies. The app companies determine our prices against operational costs then downgrade our cars and still charge us exorbitant commissions of 25% to 26%. Through this protest, we hope the prices are reviewed upwards and have the elephant in the room, ‘commission’ reduced to 10% without fail.”

According to Mnguni, “lack of regulation of the e-hailing sector is an enabler of the exploitation of drivers by app companies.” He says this can’t be addressed merely at a departmental or industry level but rather through engagements across government sectors.

“Government should regulate the industry and we are asking the president to sign the amendment bill 2016 which recognises e-hailing and the Minister and MECs to implement National Land Transport Act, 2009 Section 66(3) 4 (d). We believe with regulation, e-hailing can fall within a healthy and safe ecosystem within public transportation for both drivers and customers. When we are recognised, we can then say to the government the industry needs to grow in a sustainable manner that is reflective of the demand for services.”

Echoing the importance of regulation, Mnguni said as operators they are already regulated by the government but app companies should also be regulated to avoid further exploitation. Mnguni says that regulation will:

Reflecting on the lived experience of being an e-hailer driver, Vhathuka Mbelengwa, also of the UID, said:

“Currently, we have cars put on board at will by app companies that have increased saturation within the industry and make it harder to make a day’s living. The app partners have also set a standard of what kind of vehicles can be brought on board. Some of us are financing these vehicles over a period of time… if I am bringing in a vehicle that I am financing for five years I need to be guaranteed work for those years and that should be only taken away if some form of criminal activity is done by a driver. The blocking of drivers at will just because you have excess is unacceptable.

“Even more as drivers, we don’t enjoy the reflection of the sexual abuse happening to women but this is done because tech companies are not being forced to build the tech in a manner that is safe and is protective of all stakeholders. [The tech] has extended a platform for criminals to do as they please. And this, in turn, reflects on all of us the drivers who are looking for decent means of making a living.”

For Mbelengwa the fight against exploitation is not just for South Africans but all nationalities working within the industry.

“Our position is that no African child should go exploited in this country and yes there is a vast amount of undocumented migrant workers in the industry and this is intentionally done by app companies to ensure that they can’t advance some sort of labour disputes in the court.”

The protest comes a day after a deliberation meeting between Gauteng transport MEC Jacob Mamabolo and the UID after concerns were raised over the safety and security of the protest. Both parties concluded that UID would proceed with the planned protest action on 22 March 2022 subject to increased security measures and strict adherence to a safe and non-violent protest.

The disruption of the e-hailing service is expected to lead to a national shutdown in the coming days. DM